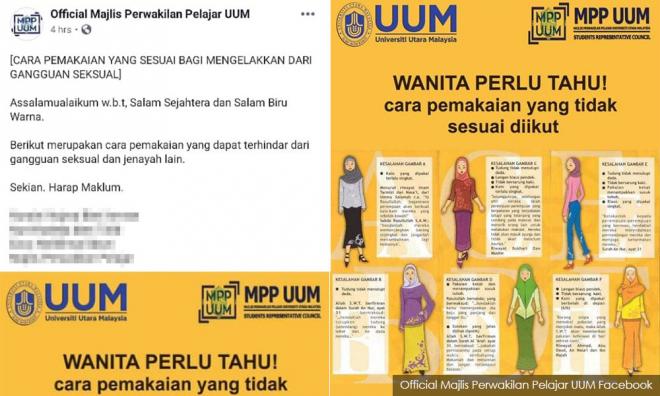 LETTER | The following is an open letter to Majlis Perwakilan Pelajar Universiti Utara Malaysia (MPPUUM) with regards to the guidelines aimed at women on how to dress in order to avoid sexual harassment, which was published on their Facebook page. The post was deleted on Tuesday.

Thank you for attempting to address the issue of sexual harassment. Sexual harassment is an issue that is gaining greater visibility today but for the wrong reason – more and more people are being openly sexually harassed with most of the perpetrators not having to answer for their actions.

A dress code may seem like the easiest solution to help solve the issue of sexual harassment. However, sexual harassment is not a one-dimensional issue that can be resolved simply by covering it up.

In fact, the All Women’s Action Society (Awam) recently held a quick survey with 35 schoolgirls aged 14 to 17, asking them if they have ever been harassed. More than 60 percent claimed that they were sexually harassed, mainly through verbal channels (including catcalling, sexual innuendos, or jokes). The key point here almost all the girls surveyed were wearing the hijab, and usually dressed modestly.

Thus, sexual harassment is a complex issue with many multi-faceted factors, which is further exacerbated by the fact that both the victim and perpetrator have had years of people telling them that:

Sexual harassment comes from the perpetrator’s belief or expectations that their attention, words and/or actions are welcome, or justified simply because the victim - who are often women - are seen as objects or commodities of sexual desire. Simply put, sexual harassment stems from a false sense of entitlement that is justified by a culture which privileges men over women.

Sexual harassment is a part of Gender-Based Violence (GBV). GBV is one of the most prevalent human rights violations. When GBV occurs in a patriarchal framework, the perpetrator (usually men) are absolved of responsibility by putting the blame squarely on the victim (usually women).

To the members of MPPUUM, we are sure you do not aim to blame the person being harassed. We are also very sure that you do not want the perpetrators to think that they are justified in their actions.

The true prevention of sexual harassment (and by extension, GBV) lies in understanding the dimensions of power, privilege and permission within the context of patriarchy and sexual violence.

It does not lie in moral policing. Only by understanding, educating and addressing gender-based violence, can we reduce the prevalence of sexual harassment.

In Malaysia, one-in-four people have experienced some kind of sexual harassment. However, this statistic has not been updated nor is the severity of the sexual harassment reflected by numbers alone.

Sexual harassment has long-term negative effects on both victim and perpetrator. The traumatizing impact for the victim is usually psychological and can affect other areas of life, namely employment, relationships, earning capacity, and the capacity to grow and impact society positively. As for the perpetrator, this simply gives him (or her) a perceived ‘license’ to continue to commit GBV, be it sexual harassment, rape or domestic violence.

Awam would like to offer our services to give the members of MPPUUM a better understanding of GBV. We would be happy to give a short talk at UUM regarding sexual harassment. Please do call us at 03-78774221 for more information.

Awam is an independent feminist organisation committed to ending gender-based violence and upholding equality and rights for all.