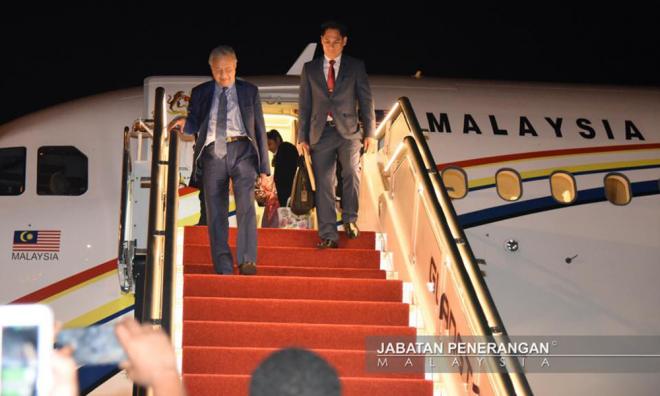 Armed with their goals and visions, in the past decade, Apec economies have been resilient, even through obstacles, and managed to ensure their goals are met.

An idea started by Bob Hawke, the late former Australian Prime Minister, today, it is one of the most important regional economic cooperation in the world.

Next year will be an important year for Malaysians as Malaysia will be hosting the Apec 2020 Summit. This will be Malaysia’s second time hosting following 1998’s Apec Summit in Kuala Lumpur.

As we have experienced in Asean meetings and Apec meetings, this would be the first time the new government under Pakatan Harapan’s leadership to steer the meetings.

Malaysia is no stranger to regional diplomacy. We hosted an OIC Summit in 2003, and we regulars in Asean Summits and also other regional summits alike.

The messages have been very clear and concise: (1) regional stability, (2) sustainable development, (3) free trade and more economic growth and (4) shared prosperity in the region.

We also stressed on peace in the South China Sea, striving to find peace with minimal confrontation as Malaysia remains steadfast in being non-aligned to major powers and ensuring the economic activity between both the United States and China, Malaysia, and other Asean economies are not interrupted.

However, as the trade war escalates today, Apec and Asean's challenge is to ensure how the economies withstand those challenges and stumbling blocks.

Malaysia is proud of Rebecca Fatima Sta Maria, as she is now Apec Secretariat representing Malaysia and the first female to be in the job.

It will be a challenge for her, given the vast experience in the Malaysian civil Service especially in the Ministry of International Trade and Industry, to steer forward the Apec agenda and ensure Apec serves the best interest of its economy and of Malaysia’s own.

In Pakatan Harapan leadership’s one-year report, it shows that the new leadership does not have the stability in terms of policy and position, thus it will create a negative impact on our economy and our people but there may be hope in this government with our involvement as a host country for Apec Summit 2020.

Hope is a wonderful thing, but undeniably, there is too much politicking in the country, both the government and opposition, against one another or within. There are many instances where ministers' statements caused Malaysians to react, at most times negatively.

Vision 2020 is almost over yet we do not have any progressive and long term vision for us to keep moving forward on the post-2020.

I believe in the light of Malaysia's position as an Apec chairperson, Malaysia needs to have a solid framework or vision on our trade policy, economic policy, fiscal and monetary policy in a year’s time before entering the new dawn of Malaysia.

Given Malaysia's hosting of Apec in 1998 and also recently during the Asean Summit in 2015, Malaysia has been focusing on economic prosperity and also fighting for a common economic goal to ensure freer and fairer trade that will benefit both Asean and nations within the Pacific Rim.

Technology must also be prioritised as the digital economy is promising a brand new prospect for growth. Technology such as big data, blockchain, artificial intelligence and not excluding sustainable environment; which can be a big deal for Malaysia if we implement or improve these sectors.

Malaysia has witnessed in the news about cases of "exported trash" and landfills, with pollution and uncontrolled development, and climate emergency continues to threaten our ecosystem and also the quality of life to Malaysians and the rest of the world.

We must renew these efforts to ensure all of us meet the UN Sustainable Development Goals. It is better to pressure the bigger economies to take hold of these threats to the environment.

Bogor Goals helped most of the Asia Pacific countries over the past decade on delivering economic progression and it should not be put on hold.

It should be continued, yet it needs to be amended as time passes. Meanwhile, sustainability and capacity building should increase even more for enhancing the best ability in economic reconstruction.

Bogor Goals will reach the deadline of its agreement in 2020 and it would be good if Malaysia would deliver an important agreement or action in a long term phase during the chairpersonship to showcase Malaysia’s prowess and vast experience in regional diplomacy by chairing the entire summit with prosperous, wise and beneficial outcomes to the Apec leaders, economies and the Asean countries especially Malaysia.

Thus, a KL Declaration must be made as a stimulus package and a continuation of Bogor Goals and Osaka Action Plan.

Malaysia's position as an Apec 2020 chairperson will be in a tough spot for this year as Apec needs to be vigilant of critical geopolitical sentiment by the US and China, and Malaysia needs to show that we can deliver a strong political will between the East and the West for the benefit of Apec.

Malaysia should always remain in the centre of international diplomacy, non-aligned between the West and the East, in line with the Wasatiyyah concept the former prime minister Najib Abdul Razak emphasised during his governance.

There is high hope that new government especially for the Ministry of Trade, Ministry of Finance and Ministry of Economic Affairs to act together and do their best in delivering important agreements for the benefit of all country members.

Leave unnecessary politicking behind. Good policy resolutions and an overall agreement from Apec 2020 is best for Apec member economies, Asean and Malaysia.

We must focus on new horizons of trade and leave internal party bickering behind.

We may not know who is going to be Prime Minister next year. What Malaysia needs is a strong government and an effective opposition to ensure we get the best policies for the country.

Leave petty things we used to bicker every day in coffeeshops. Malaysia needs a strong and stable leadership regardless of party affiliation.

We know what happened during the 1998 Apec Summit in Kuala Lumpur.

Anwar Ibrahim, the former deputy prime minister and MP for Permatang Pauh back then, was trialled for a scandal, and the heat of the Reformasi protests is still going on. It was problematic and controversial.

We need to show the world the true Malaysia. If the country is being recognised as progressive, we will be viewed as shapers of the world, for the benefit of all not just within ourselves. Look outwards, not inwards.

Foreign relations
Letter
Ikmal Hazlan Ikmal Hisham
APEC
Related Reports
China wants trade talks with US to be equal, mutually beneficial
2 years ago
Apec fails to live up to its name amid US, China acrimony
2 years ago
M'sia will continue to fight for free and fair trade, says Dr M
2 years ago
Apec nations fracture over future of free trade
2 years ago