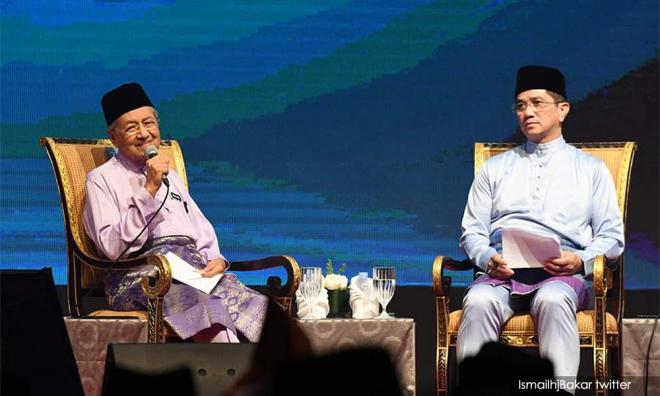 Handover arrangements not cast in stone

LETTER | I refer to news reports about Prime Minister Dr Mahathir Mohamad refusing to be drawn into PKR's internal squabbles between its president Anwar Ibrahim and deputy, Azmin Ali.

Mahathir is right in that he should not poke his nose into the affairs of another party. All parties should be left on their own to resolve any internal dispute.

But having said that, at the heart of this division between the PKR president and his deputy is a more pertinent question - who will take over the premiership when the 94-year-old Mahathir calls it a day?

From the day when the gay sex video implicating Azmin first surfaced, the overarching theme has always been about succession. Questions about the identity of the person in the video; who the conspirators are and the arrest of Anwar's aide are merely sideshows.

In a pact made before last year's watershed election, Mahathir was to hand over the country's reins to Anwar. But as Azmin's influence grew and Mahathir keeping close to his chest the handover time frame, anxiety among Anwar's supporters within and outside PKR started to set in.

Long story short, the gay sex video is to torpedo Azmin's chances of taking over as the country's eighth PM by those anxious about his meteoric rise whether from within his own party or otherwise.

So if at the heart of this gay sex video is the question of political succession, then Mahathir has the moral responsibility to review any handover arrangements made prior to this scandal breaking out.

Will Mahathir be handing over the leadership mantle to someone who has patience and tenacity or to someone who resorts to political blackmail ala-KGB, or better known as kompromat.

Does a nation want to be held ransom by individuals or groups over something as important as the candidate for our next prime minister?

While Mahathir is right to uphold the non-interference policy with regards to the internal squabbles of a fellow component party in Pakatan Harapan, he has every right to govern the nation the way he thinks best. And this includes weeding out those unfit to be the next PM.

Whatever arrangements made prior to last year's election are not cast in stone. What is cast in stone in a vibrant democracy is putting the interests of the people over individual political leaders.