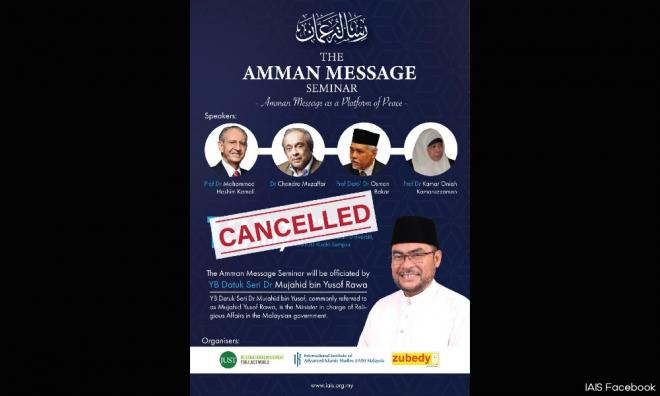 How much longer can we indulge in hatred and prejudices?

LETTER | Every day and night, we witness through the mass and the social media horrendous massacres, bombings, killings, pain and suffering across the globe, particularly in West Asia and North Africa.

Yet more than two decades ago, the situation was not as tragic.

Political insanity has always been in the history of humanity, this is not to be denied,

but then there have always been reactions from among the sane and those with a conscience to return the situation back to normal, livable conditions – sooner or later.

Shouldn’t the effort to return to a normal, decent life begin again, starting now, initiated by those with a conscience?

Certainly, the effort will not be smooth and easy, but it ought to be undertaken. If the people of conscience do not do it, who else will?

altogether but just as important is to prevent the possibility of these occurring elsewhere, especially in Malaysia.

It is essential therefore that we Malaysians promote the culture of no-hate amongst ourselves, to see differences as differences and not as hatred or animosity, to learn to agree to disagree, and to manage our differences decently.

This is generally in the DNA of Malaysians, imbued with our legacy of muhibah, namely to give space to each other to be as we are without causing discomfort to others.

But the shocking bomb threat of a seminar on the "Amman Message” by the Gerakan Banteras Syiah (Shia Eradication Movement) should be a wake-up call to all Malaysians.

Taking lessons from the church bombings in Sri Lanka, as the Muslim community there lamented in hindsight that being aware of the possibility of such a thing happening, they should have acted more decisively to prevent it.

Similar situations have happened elsewhere - and the lessons to be learnt is that indifference and passiveness in the face of brewing troubles and menacing threats will lead to tragic situations.

Hindsight regrets are useless and meaningless.

Why do Sunnis and Shias hate each other so much to the point of trying to eradicate each other from the planet upon which Allah Almighty, in His Infinite Wisdom, has placed us all?

Is it really a matter of faith and belief, or are these not the concoctions of the politics of power-crazy politicians serving the agendas of their patrons and their allies.

It is in the light of understanding each other and to diffuse misconceptions and hatred between Sunnis and Shias that King Abdullah of Jordan, a Sunni king, initiated the Amman Message in 2004 in consultation with leading Sunni and Shia ulama, in the attempt to stop Muslims butchering fellow Muslims.

How can it be so wrong to just understand this Amman Message?

On the contrary, this Amman Message ought to be explained to Malaysian Muslims of whatever stance so that we will not be made tools of hidden, perverted agendas of devilish minds.

After all, we come into this world for a limited span; we better live our time properly.

I hope the mass media can open up a forum on the Amman Message in their columns.

It is safer and more far-reaching than seminars and personal Facebooks.

Dr Kamar Oniah Kamaruzaman is a professor of comparative religion at a Malaysian university. She was scheduled to speak at the aborted Amman Message seminar.