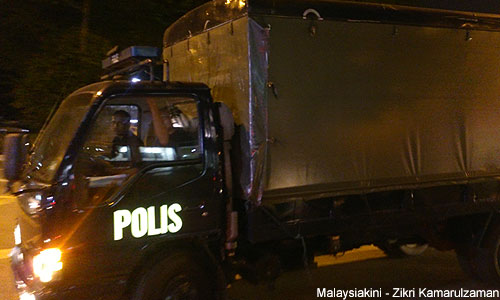 The IPCMC must be a Black Maria, not a Kancil

LETTER | In an article on Wednesday titled Actually, we commented on 100% of the IPCMC Bill, Citizens Against Enforced Disappearances, Caged, mentioned Green Papers. Here I will respond to several requests I have received to expand on Green Papers.

The Governance, Integrity and Anti-Corruption Centre drafted the IPCMC Bill. The statement by Caged reminded GIACC and the minister-in-charge, Liew Vui Keong, that the Pakatan Harapan election manifesto promised to introduce Green Papers as a tool to engage all stakeholders early in the policymaking process.

I commend Liew for seeking views from many segments of society about the Independent Police Complaints of Misconduct (IPCMC) Bill which he tabled in Parliament on July 18.

In recent history, Liew is the first minister to take such a step. He faces an uphill struggle. Interested parties must reciprocate by working with him to achieve a bill which will satisfy high expectations.

Now, about the bill itself.

The IPCMC bill, like every other piece of legislation, is designed to meet certain goals. We can think of it like choosing a car. First, you decide what you want to do with the car. Then, you choose a car from the many which are available. Then, you modify the car, if necessary.

What do we want the IPCMC to do?

Suaram has advocated for an IPCMC for about 20 years. Suaram expects the IPCMC to address police misconduct and crimes such as those included in its annual reports which detail human rights violations in Malaysia.

Caged expects the IPCMC to act against police officers who abduct and disappear people (“enforced disappearances”) – a serious crime, punishable by death. Suhakam shares this expectation.

Note: Clause 25(1)(b) of the present bill says if the complaint involves a criminal offence, the IPCMC must refer it to the police.

The experience of Suaram, Caged and Suhakam is that the police cannot investigate themselves. For example, during the public inquiry into the disappearances of social activist Amri Che Mat and Raymond Koh, it was clear to everyone that the investigating officers never took seriously the possibility that the police themselves abducted the two men.

Therefore, we expect the IPCMC to effectively take over the investigations of certain cases – as is practiced in other nations, as was recommended by the Police Commission in 2005 and as was enacted in the Anti-Corruption Commission (MACC) Act, 2009 and in the Enforcement Agency Integrity Commission (EAIC) Act, 2009.

What do the above comments have to do with a Green Paper?

Those comments are relevant because the goals of the IPCMC must be expressed in relation to actual cases of police misconduct which have not been resolved satisfactorily. Also, the question of why existing institutions failed to address these issues must be considered.

Take, for example, the case of Aminulrasyid Amzah, the 14-year-old boy who was shot to death by police in April 2010, in Subang Jaya. One police officer was initially convicted of culpable homicide. But his conviction was overturned because the autopsy report showed 20 bullets had been fired downwards into the boy – by policemen who were standing above him.

We are not aware of any actions taken against any policemen in that case. The family only got some semblance of justice in 2018, from the Federal Court, following a civil trial. The court upheld the finding of the High Court and the Court of Appeal, reported by the media as follows:

"[...] the police were not justified in the shootings, which had breached the IGP's Standing Orders (that firearms can be discharged only where lives of police personnel or the public are threatened)

Note: Clause 22(2) of the present Bill puts breaches of Standing Orders out of the scope of the IPCMC. Clause 14(3) of the 2005 Draft Bill included former officers within its scope. The present bill does not.

A Green Paper will lay out issues (cases) concerning police actions which need to be addressed in cases such as those involving Aminulrasyid, Amri Che Mat and Raymond Koh.

The Green Paper will discuss why the EAIC failed to address the issues in those cases: the reasons may be inadequate legal powers, lack of focus, inadequate funding, poor leadership, etc. It will provide historical data, such as growth in numbers of staff, budgets, results and so on.

The Green Paper will present a range of alternative solutions and be the basis for an invitation to the public to comment on them.

A Green Paper makes everyone clear about which mountain is to be climbed, and which track up is to be chosen. Without a Green Paper – a common set of data and questions – we may end up discussing a path chosen by another to climb the wrong mountain.

A Green paper will ensure that we don’t get a Kancil when what we need is a Black Maria.

The writer is spokesperson for Citizens Against Enforced Disappearances (Caged).