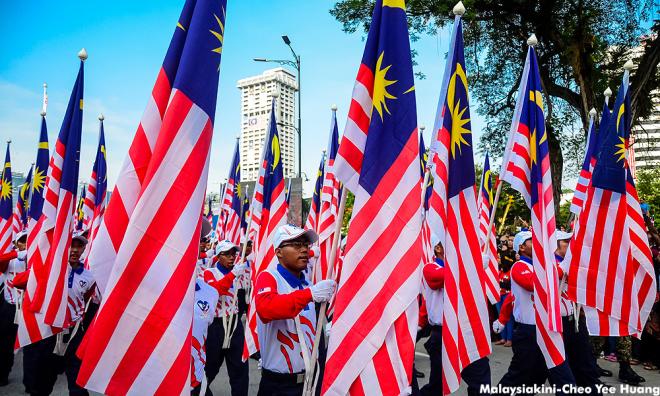 LETTER | Why should non-Malays feel uptight about the introduction of khat or Jawi calligraphy in the vernacular schools? On the other hand, why should Malays feel offended by the crosses hanging out at churches? There is something going amiss even in the eve of celebrating 62nd National Day.

There seems to be little trust, by non-Malays including not only Chinese and Indian Malaysian, but also East Malaysian non-Muslim natives, in a Malay dominant administration that is based upon Malay supremacy propagated by Biro Tata Negara, a governmental body that functions with an unconstitutional, Malay Muslim-dominant ideology founded during Mahathir's first tenure as the country’s premier in the 1980s while civic education emphasising citizen’s rights and duties was literally scrapped from the school syllabus.

For nationalism to be progressive and productive, it has to be outward-looking and progressing with times. There would never be true national unity if a single-race dominance is a foundation for multiethnic Malaysia.

A single-race dominance has been proven failed to unite any multiethnic countries, including a state ideology based on nativism or bumiputeraism of a single race that is not necessarily the first settlers but developed the first “civilised government” (the term coined by white apartheid regime) or the first “definitive government” (the term coined by Dr Mahathir Mohamad in The Malay Dilemma), meaning a single- dominant “race” has the absolute power to dictate others’ citizenry status as to who is native and who is not. In other words, Orang Asli have no constitutional position to be considered natives or bumiputera.

Today at the eve of 62nd National Day, this unconstitutional ideology of dividing citizenry into native and non-native still divides and rules the country of many ethnic groups.

Just how similarly all these terms in the name of a single race-dominant nationalisms coincide with one and another in propagating racial dominance and “privileged”. Racial dominance is lacking any moral consistency. But, how does one, who believes in Malay-Islamic supremacy or Ketuanan Melayu in administering Malaysia or Tanah Melayu (Malay’s Homeland), respond with a moral consistency in regards to Thai dominance in resolving minority Malay Muslims rights in Southern “Thai-land”?

Similarly, Lee Kuan Yew provided narratives, in a very much self-pity gesture, for Singapore’s separation from Malaysia. He described Singapore, to the effect, like a little ship being swamped by a sea of Malay Muslims. Forgetting his narrative of Malaysian Malaysia, Lee came close to equating Singapore with Israel that was mainly for the political expediency of creating a new “Singapore Nation”, according to Michael D Barr, that was pretty much based on Lee’s personal racial view of Chinese (East Asian) cultural superiority. Contradictorily, Lee was more an observer of Anglo-Saxon superiority that was common among the immediate post-colonial leaders of the third world.

As Lee and Mahathir had been known for their opposing views in terms of Malaysian nation-building when they were parliamentarians in Malaysian parliament, one might have been surprised that Lee was quoted to have agreed with “three-quarters” of what Mahathir’s analysis in The Malay Dilemma pertaining to Malay’s cultural and genetic inferiority along the “racial hierarchy”.

Malays’ tolerance towards corrupted leaders has been cultivated under this mindset to maintain the “Malay sovereignty”. If not for the rhetoric of maintaining the “Malay sovereignty and dominance” in government, from 2008 until 2018 general elections, Malay voters have voted in a typical bell-shaped curve pattern, which is quite reflective of how ordinary voting pattern would be in a mature democracy.

We should thank the reform movement brought about by Anwar Ibrahim and PKR, which has been a successful Malay-majority multicultural political party to the envies of many. It also represents the true hope for the future hope of democracy in the majority rule but a big no to both racial dominance by either the majority or a minority.

Isn’t it a sort of Stockholm Syndrome?

Isn’t it a sort of Stockholm Syndrome in believing that there would not have been any change of government without Mahathir’s leadership and race-based Bersatu  in 2018 general elections? As the longest-serving prime minister, Mahathir had spread his influence throughout three to four generations of Malaysians, and his world views have lied down the deeply ingrained political culture and racially addictive policies of “Malay sovereignty and dominance”. After 62 years of independence, it seems we have no better dose of medicine than the addiction of Malay supremacism.

Like Lee who actually admired “three-quarters“ of Mahathir’s unscientific and negative assessment of Malays themselves explicitly expressed in The Malay Dilemma, both Lee and Mahathir, whose yesteryears’ political animosity has actually been more of complementary to each nation’s political expediency, had wrongfully adopted Charles Murray and Richard Herrnstein's bell-shaped curve theory, that reflects the normal distribution of racial hierarchy and intelligence within a race/society, to justify their elitist rule whereas the smartest know the best for their more inferior community.

Generalising all Malays of lower competence in business and professional fields not only has been proven wrong, but it has been used as rhetoric to consolidate the Malay elite ruling class’ power and to further sustain an oligarchy economy.

In real-time, an ethnic group and a people’s socio-economic status advances in relation greatly to the availability of education, effective public and private administrations, social justice and social mobility. The majority of Malays have progressed not due to the reserved ‘privileges’ in getting government contracts and GLC posts for the few elitists, but the general policies of industrialisation, urbanisation and uplifting of education standards.

This is evidenced by the similar ratio of Malay to non-Malay average household income has stood the same before and after the implementation of the NEP. The same ratio is also applied to Malay and non-Malay in Singapore city-state. Nonetheless, the income disparity widened when most Malays used to live in rural areas, and the income gaps have narrowed when more Malays move, live and work in the urban areas.

The Malay-centric New Economic Policy was once carried out in a noble mission to restructure the socioeconomic disparity and eradicate poverty. Nonetheless, its shortcomings had appeared, but they were carried on with the New National Policy that also created an acute disparity in wealth distribution and new class conflicts between rich and poor Malaysians, of which Malays are no exception to this.

The Malay Nationalist Economic model under the National Economic Policy by privatising government assets and operations to elitists by which it has cultivated cronyism, nepotism and corruption. Among many unresolved scandals, the 1MDB scandal was just the tip of the iceberg of an ailing race-based nationalist economic model.

Even after Pakatan Harapan’s takeover of the government, the old regime remains pretty much intact.

A preferential socio-economic policy could be either the need-based affirmative action or the race-based apartheid. Affirmative action was never meant to be race-based, as Martin Luther King Jr articulated that it was for all poor Americans regardless of their colour.

And US Supreme Court has over the years rendered race-based quotas as unconstitutional whereas merits must precede racial categorisation. That means besides disadvantaged ethnic minorities, disadvantaged white Americans have too benefited from affirmative action.

The African-American scholar Orlando Patterson concludes recently that the benefits of affirmative action (in university admissions) “promote (if indirectly) a heterogeneous professional elite” and “in conjunction with anti-discrimination laws, it has directly fostered the growth of an African-American and Latino middle class”.

Nonetheless, the non-racial labour law, anti-discrimination law, availability and upgrading of vocational education, creation of job opportunities, accessibility to social security and housing are far more effective in uplifting the socio-economic status of any community. Unlike apartheid and NEP, Affirmative action was never meant to cultivate the crony elite class of a particular race.

In the Malaysian context, it must be alarmed that affirmative action is never based on race, native status nor racial supremacy or racial hierarchy. Any preferential socio-economic policies based on race, ancestry or bumiputera/native status could draw similar justifications for Afrikaner’s apartheid to Mahathir’s Malay supremacy despite the fact that it is unconstitutional under the Federal Constitution.

Mahathir has admitted to his own personal unpleasant racial treatment in Singapore as a medical student. But one’s own adverse experience with racism does not justify the repercussion with institutionalised racism, that has been engineered by Mahathir and practiced by Umno-dominant BN to the present Bersatu.

Many has chosen to blindfold the fact that Bersatu and Mahathir made it clear that its mission is to “save Malays and Umno”. It seems more natural that Umno and Bersatu will remerge for their common propaganda in great contrast to all the other component parties of DAP, PKR and Amanah, which propagate New Malaysia of one nation and one people than separate nationalisms under the umbrella of Malay nationalist dominance.

Pakatan Harapan leaders are pretty much in denial of the true reasons for many U-turns they have made since their victory at GE-14. Harapan is like a cart pulled by three horses going in a single forward direction with an old warhorse keep turning on its right to make U-turns.

Its own unnatural combination of contrasting ideological values between Bersatu and other component parties threatens not only the survival of Harapan but bleak the actual creation of bi-coalition democracy in Malaysia.

The weird composition of Harapan has practically destroyed than achieved a genuine bi-coalition democracy. The actual threat to the creation New Malaysia lies in the Harapan’s own closet- that is the undying single-race supremacist ideology not only has failed to unite our nation and to create a New Malaysia, but it would also potentially create more problems by breaking the nation apart.

Interestingly, some Malays view themselves as the “Englishmen of the East”, a sort of Anglo-Saxon – like superiority among themselves in governing the Federation of Malaysia with the Malay majority dominant nationalism.

The dominant English nationalism, that has ruled Great Britain for centuries, has almost come to the verge of a total break-up following the passage of a referendum on Brexit. Had there been a predominantly Anglo-Saxon nationalist movement to leave the EU, likewise, there would be reciprocal Scottish, Irish and Welsh nationalisms.

Similarly, a single-race dominant Malay nationalism has been the actual threat to a genuine Malaysian unity as reciprocal, separate Chinese, Indian, Sabah and Sarawak nationalisms will rise and break the nation apart.

The culprits are none but the Malay supremacists. The solution is none but lies in a common belief in all-Malaysian nationalism whereas all Malaysians are born, raised and treated equally by the state.

Dr Boo Cheng Hau is the former assemblyperson for Skudai.