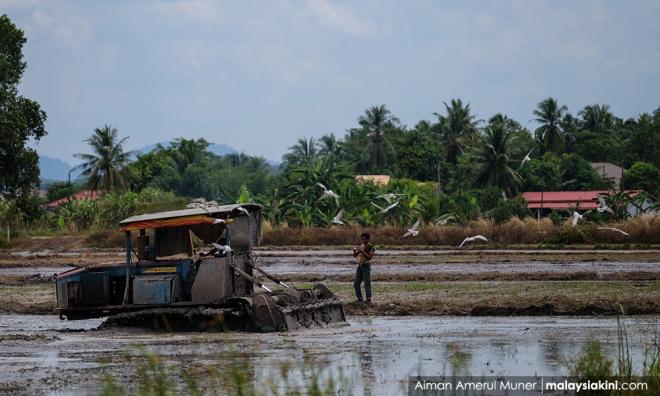 LETTER | History, in most forms, has been taught in a linear manner. Whether one is taking A-levels or the International Baccalaureate, it is assumed that the history of mankind will progress, rather than regress.

To the degree the latter may happen, the syllabus of the schools the world over often cast this in the form of cataclysmic wars, climate change and an overdose in consumerism. These will cause a collapse in major societies.

But if the three 'C's do not manifest in their fullest forms, human societies will continue to progress.

In this context, Malaysia has neglected the importance of agriculture. Agriculture is seen as an industry that can drag the country backwards.

Yet agriculture is the backbone of food safety, security and sovereignty, and should not have to be looked down on as something regressive.

In Japan, while eight percent of its land is arable, it has utilised every form of technology to become food sufficient. Thus the Japanese have gone into hydroponic farming in a big way.

Waters are recycled to allow fruits and vegetables to grow in vertically-built environments or greenhouses.

In the United States, were it not for the trade war with China, the agricultural industry there is one of the biggest in the world, supplying products to many parts of the world.

Be it soybean, rapeseed or potato, the United States is in the lead, as is the European Union. Northern Ireland, for example, understands the importance of rapeseed and soybean, and has lobbied hard to stay within the European Union to benefit from Common Agricultural Policy subsidies.

In Italy, while the south may remain poorer than the nrth, it is the south that is focused on driving the grapevines in Italy, allowing Italian brewery to have a steady supply of red wine to spur their economies.

Had it not for the aging process that is in grip of Italy, the government in Rome would do just as well by focusing on the importance of agriculture.

Instead, Italy has been roiled by political instability and turbulence over the last three decades, recording the most number of government collapses despite being a member of the Group of 7.

Malaysia needs to take heed of the view of Deputy Agriculture Minister Sim Tze Sin who has pointed out many serious problems with an excessive focus on the plantation of palm oil.

Now that India and China are not buying as much palm oil from Malaysia, the prices of palm oil have reached a plateau.

But Sim has correctly pointed out that the world's population will grow to nine billion by 2050. Malaysia can use the remaining land to focus on supplying food, both to itself, and selling them to countries that need them.

A strategic partnership can be built with Japan too, where their hydroponic farming, can be built in Malaysia, creating a win-win outcome for the two countries.

In fact, in light of the desertification of China, due to extensive use of its land over the last 40 years, China itself is in need of more food and fruits from Malaysia.

The late Khoo Kay Kim once said that if only Malaysia knows how to apply more food products to China, our economic growth would be secured.

Khoo was not referring to China's addiction to our durian, but papayas, mangoes, pineapple, tapioca and if need be even bird's nest; all of which are the best in the world.

Our youths need to understand that Malaysia is a blessed agricultural land. As and when they combine agricultural sciences with proper soil studies, and the riverine systems, that are both manmade and natural, they stand the highest chance to transform their investments in agriculture into serious commercial endeavours.

Achieving the latter, however, requires the top echelons of the government to re-emphasise the strategic importance of agriculture.

Students in Malaysia should not be told that industrialisation is the only way out to eradicate poverty. Rather when a country is sufficient in its food safety, security and sovereignty, as Japan did, that country can overcome many adversities, and become a fully developed economy too.

With growing underemployment and unemployment amongst youth, nearing more than half a million, RM51 billion annual food imports, and vast fertile ground that Malaysia has, it is not rocket science to put all those variable in its place.

Bringing glory to agriculture, like many Scandinavian countries have done, Malaysia can productively employ its youth resources and land as a way to reduce food imports and gradually increase food safety, security and sovereignty.

If one looks at the staggering statistics of our food imports, the immediate question would be what happened if there was an air, land and maritime blockade?

Would Malaysia be able to feed its 32 million population? For how long? Think and reflect.

Yoursay: Flying into oblivion with a car no one asked for
30 Aug 2019
New thinking needed to bring down the cost of food
8 Aug 2019
Deputy agriculture minister gets hands dirty with urban farming
11 Aug 2019
Malaysian economic resilience is a must in this age of Sino-US trade war
7 Sep 2019