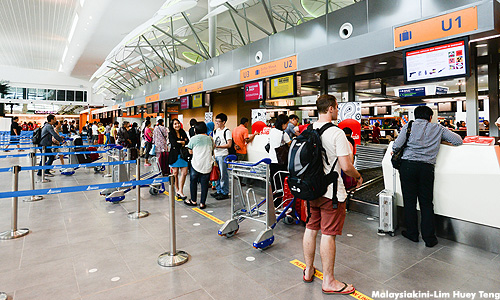 Landing at KLIA2 is nothing short of a nightmare

LETTER | Most of us who choose to travel with a budget airline are willing to compromise on the luxuries as we are focused on the destination instead of the journey itself.

However, we do not expect our journey to be extended by a couple of hours due to the inefficiency of an airport, do we? Unfortunately, this has become a norm these days when arriving at KLIA2. My excitement for my destination is short-lived as soon as I disembark a flight that lands at KLIA2.

As a frequent traveller, I dread landing at KLIA 2 because, unlike other airports, the time it has taken me to walk from the arrival gates, clear customs and collect baggage has never taken less than 90 minutes. In fact, there was once it took me a total of three hours just to get out of the airport.

This is certainly not what any passenger expects to be greeted with after a long flight and as a former Malaysian, it’s not the first impression I would like other foreign passport holders visiting Malaysia to be welcomed with.

Personally, I am not going to make a big fuss about the long pilgrimage KLIA2 makes me endure, but my heart goes out to the elderly and parents with young children who have to walk the distance, which is a few kilometres, if I’m not mistaken, carrying their bags and kids.

My last few trips to Kuala Lumpur have been nothing short of a nightmare at the KLIA2 airport. It’s worst than the chaos I remember experiencing at Thaipusam as a child. The queues for non-Malaysian passport holders is horrendous. The layout is not conducive for the volume of passengers the airport receives. There is just no structure or order. I kept getting in the way of Malaysians heading to the e-gates.

Insufficient barriers to guide people on where to queue to avoid us lining up like snakes and getting in the way of others.

With the airport tax we are paying, it’s not unreasonable to expect the basic facilities that have been outlined above to help make airport custom clearance seamless and convenient for passengers.

I understand that the Malaysian government recently made a decision to reduce the passenger service charge to RM50 from RM73. I hope this will not be an excuse to disregard the current inefficiencies or become the cause of the quality of service and facilities at KLIA2 to deteriorate further.

I’m not denying that long queues at airports are becoming a norm as people are now travelling a lot more. It’s quite common in many busy airports but the difference is that these airports seem to have a better process to manage the human traffic.

With 2020, being Visit Malaysia Year, I’ve seen several banners and posters promoting it around the world. This will definitely result in an influx of tourists landing at KLIA and KLIA2 next year. I really hope something will be done promptly to look into the matter I have highlighted as, I for one, would not want myself or anyone else to be welcomed into Malaysia with such inefficiency.