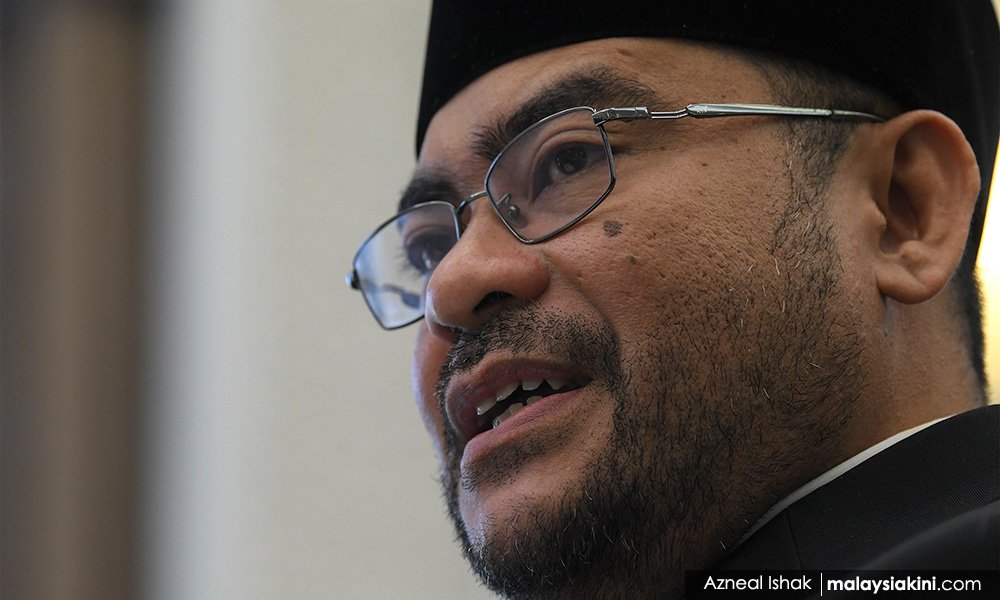 LETTER| I am certain, Zaid Ibrahim realise the importance of Islamic administration in the country's development. Unfortunately, I see him trapped in a siege mentality of Jakimophobia (if I may use the term).

Baseless fear results in endless ridiculed of anything Islamic. Jakim is a short form for Jabatan Kemajuan Islam Malaysia.

He missed a point to alert readers.

Education Ministry got the biggest chunk of the national budget allocation that amounts to RM60.2 billion while the Health Ministry received RM30.6 billion towards better public health services.

Yet, Zaid argues why Islamic affairs through Jakim received a big amount?

He failed to see the whole need but focuses his mind only to Jakim.

Zaid chose his favourite subject on Islamic affairs making his allegation such as 'religious matters is political and is divisive in Malaysia'.

He failed to deliberate what 'religious matters is', but starts to question why Jakim should have received the big amount (how much in comparison to others, he did not do justice to the readers)

Zaid has been very consistent in questioning 'religious matters' in the budget debate since 2017 and prior to that he called Jakim to be more 'liberal' and labelled 'lazy, stupid Malaysian turning to religious law'.

Jakim become his target again in 2020 budget with the same kind of 'Jakimophobia' mindset.

His comments reflect his sarcastic thoughts towards the word 'Islamic' and his mind is trapped within the phobic narrative of the alleged 'Jakimisation'.

Let me remind Zaid, Jakim is innocent but the previous leadership who exploited Jakim to become that monster it has been now in the transforming period within the Malaysia Baharu phase under a new vision.

Zaid (above) must have missed a lot of developments since two years of Pakatan Harapan's effort to transform this nation including Islamic affairs to a progressive and inclusive entity.

The policy of compassionate Islam aspiring to address radicalisation of religion on one extreme and Islamophobia on the other end is a great contribution to prosper the nation and ensuring Malaysian to choose the path of peace and harmony.

Jakim is entrusted now to promote three main thrust of its administrative pillars which are the compassionate Islam, the greater objectives of shariah and the Malaysian model.

We aspire to define Islam within the context and realities of our multiracial environment without diluting the principles of Islamic tenets and teaching.

How this big ideas can potentially be realised will depend on a lot about how people of the two extreme (radicals and Islamophobia) in Malaysia can come in the middle, and help us build the nation together.

Islam is embedded in our nation, we cannot pretend to ignore it through our simplistic mind nor through our phobic attitude towards Islam.

We are focusing on integrating our six core values into the framework such as Ramah (kind) Aman (peace) Harmoni (harmony), Mesra (friendly), Alami (green) and Hormat (respect).

It is read R.A.H.M.A.H in Bahasa which relates to kindness, compassionate and full of mercy in English.

All the 14 agencies under the Islamic affairs are submissive to the three pillars, and the six core values under one vision towards a compassionate society.

Even the UN High Commissioner of Human Rights was impressed when we presented it during her meeting with the Minister of Islamic Affairs.

The new policy of compassionate Islam or Rahmatan Lil Alamin is beyond politics as the policy sets to aspire and contribute to the recently announced Wawasan Kemakmuran Bersama 2030 (WKB30).

The good news is that the Council of Rulers have endorsed it as a way forward for Islamic affairs in the new Malaysia to sustain. What is so divisive in religious matters if I may ask?

Zaid and the like-minded who are phobic to anything on religious matters should be alerted that almost 70 percent of the allocation to Jakim goes to Guru Kafa, Imams, Guru Takmir (religious teachers in mosques) and supervisors of mosques and Kafa.

The remaining 30 percent is administrative and programs in the nature sharing the small portion with other needs such as administering halal certification, TV Hijrah etc.

The big chunk on the allocation helps to provide needs for more than 35,000 people especially in rural areas for their service to the nation which are unknown to Zaid and most of us.

What is wrong providing little allowances to these folks?

Rest assured we will guarantee their commitment to teach our children basic of Islam in line with the compassionate Islam that we aspire.

Yes, we got RM1.3 billion, it's small comparing to our ideals in contribution to nation's harmony and peace and thus prospering the nation.

Alhamdulillah, we can still manage it with little that we have.

race & religion
budget 2020
jakim
mujahid yusof rawa
zaid ibrahim
Related Reports
Jakim has too much money
a year ago
Zaid: Media rot started during Dr M's first tenure, successors followed his blueprint
a year ago
MP: Mujahid's statement on LGBT 'throws them out into the cold'
a year ago
Marina accuses Mujahid, Wan Saiful of 'misogyny' over Women's March remarks
a year ago