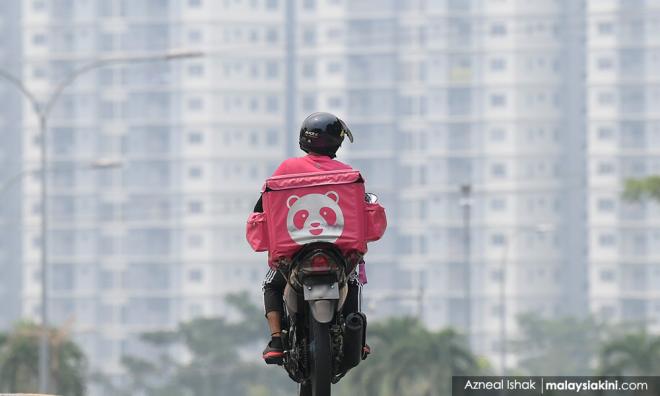 LETTER | I refer to the Malaysiakini report PM: We want to have regulations for Foodpanda, Grab.

Regulations for Foodpanda, Grab to protect those in the gig economy?

I wish to ask the government of the day. Who monitors and manages the licensing for taxis in Malaysia? Who regulates them? Who sets the policies and regulations for public transportation in the country? Who approved the planning of developments and township?

You - the government of Malaysia.

The public has consistently and perpetually complained about the poor services by the public transport operators but what action or remedial steps have you taken to improve it? Zilch.

The public complained about the poor connectivity in public transport. Did you listen and improve on it? Zilch.

The public complained about the inaccessibility and lack of supporting infrastructure around their workplace/residences when commercial and residential developments were planned and approved. Did you listen? Zilch.

After the introduction of Foodpanda, Grabfood etc, those who wish to have a meal outside no longer need to waste unproductive hours and endure unnecessarily under the hot sun waiting for an available car park which is sorely lacking in most of the commercial areas

All these gig models didn't spring out of anywhere suddenly. Entrepreneurs who started these gig models saw the inefficiencies in the existing business models and the lack of supporting infrastructure that gave rise to them coming out with a model to support or plug these gaps.

The gig business model is supposed to offer and provide an additional income for existing wage earners who find their existing wages are insufficient to meet their monthly living expenses. It was not meant for people to engage in it full time. It was meant to allow people to fully utilise their assets e.g. their cars, their motorbikes, unoccupied homes/apartments and is not meant to be a full-time business or income earner.

It was meant for those who don't want to be tied up with a 9 to 5 job. Those who wish to work at their own pace and time. Those who wish to have a flexible working schedule so that they can have more time to look after their families or pursue their own interests. Obviously, enterprising individuals have the option and choice to pursue it full-time if they wish.

If rules and regulations are introduced to protect those "employed" in the gig economy, it would be a "death knell" for those would-be startups who plan to launch or are in the midst of planning a startup to participate in the gig economy.

The government should refrain from intervening in the gig economy. Malaysia is a small country in terms of users. Our market size will not create a unicorn out of any startup in the gig economy. Let these startups use Malaysia as a testing and breeding ground and pilot their business model without interference. If we want startups in Malaysia to grow to be a unicorn and a regional/worldwide player, the government should not put their heads and hands into this.

The government only "intervenes" by helping these startups expand regionally when they have successfully penetrated the "small" Malaysian market.

The government has to understand and admit that they have no idea which area or focus a new startup would emerge from the various initiatives that are being undertaken by the private sector and the individuals concerned. It could be a startup in a completely and unthought-of sector common to most people.

If the government believes that by introducing rules and regulations it would bring some orderliness to this economic sector, they will sadly regret it later. The gig economy opened up a new dimension for all our enterprising youths where little self-capital is required if one has an enterprising idea.

The gig economy stripped away a lot of necessary requirements which an entrepreneurial spirit needed to muster in the old days before they could embark on their venture such as huge capital outlay and investments in physical assets. Now because of advancement in technologies, practically every enterprising citizen can be an entrepreneur with just a small amount of investment.

In conclusion, my plea to the government is please stay away from trying to regulate the gig economy. The ecosystem surrounding the gig economy is bigger than just the interests of those who are working in it. A lot of unproductive assets would be put to good use by enterprising youths. Unproductive hours through waiting would be minimised when matters are resolved and moved efficiently along the ecosystem.

Those who start a business in the gig economy are complementing the government’s efforts in raising the spending power of the people by offering and giving them an opportunity to supplement and improve their monthly income. Food and beverage operators will see an improvement in their productivity and businesses as people are now able to enjoy their food more without the need to go out of their offices or residences. Motor vehicles will enjoy steady sales as the public continue to invest in motorbikes or vehicles knowing that in addition to providing convenience and comfort to themselves and their families, they can use the same to earn and supplement their income.

Properties will also enjoy brisk sales as investors investing in properties know that aside from the traditional rental market, they have the option of leasing out their properties to a different segment thus allowing property developers to continue developing.

The benefits to the ecosystem far outweigh the proposal to develop rules and regulations to protect those who are working, supposedly on a part-time basis, in the gig economy.