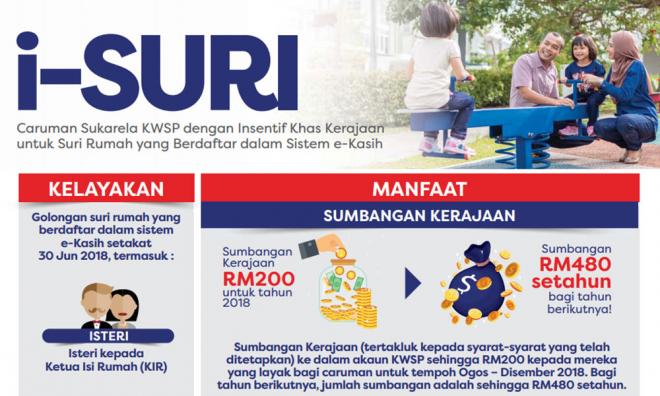 LETTER | The EPF's "Skim Caruman Sukarela Insentif Suri" (iSuri) aims to protect the welfare of women. In particular, the scheme is targeted for housewives, single mothers, widows and single women registered under the National Poverty Database (eKasih) system. In which it acts as a safety net to provide savings in preparation of uncertainties rather than relying solely on the provision of help by the government or any organisation.

The implementation of phase one and phase two that we have seen so far are a voluntary contribution for the members of the iSuri scheme. Moving into 2020, the scheme will finally reach its last phase where a compulsory contribution amounted at 2% from a husband’s salary is to be made to his wife’s account. However, the deputy women, family and community development minister said that there needs to be a finetuning of the legal constraints to allow this implementation.

With amendments on existing policies yet to be made, the mechanisms of this scheme then appear to be vague. Especially, there is a concern on the amount of contribution for polygamous couples; either they are subjected to 2% for each wife, which simply means a husband with four wives will need to contribute a total of 8% of his EPF payment. This was raised by the opposition in Dewan Rakyat last Thursday.

To date, this scheme has demonstrated the government’s commitment to elevate the position of women in society with full-time housewives being recognised. The transition of the scheme to phase 3 should then be fully supported. Although the following points can be considered by the government.

For a start, iSuri should be introduced as a part of the module in the marriage course. This is to manage a rising divorce rate caused by financial problems. According to statistics by the Ministry of Women, Family and Community Development, it was found that financial problems among households were the biggest contributors to divorce. Between 2013 until May 2019, around 17,359 cases were reported to be the main influence in a divorce. This is hugely caused by financial illiteracy and future planning in a household.

An implementation of this scheme will then allow men to have a clearer picture of their financial responsibility in sustaining the welfare of their wives instead of taking this concern lightly that will only lead to a divorce. Especially in a polygamous marriage where a husband needs to consider the welfare of more than one person.

Secondly, in discussing this matter in polygamous marriages, the government should be careful in addressing and determining the percentage of the contribution for each wife. As stated by Dr Wan Azizah Wan Ismail, this will be further discussed. However, it is important for the compulsory contribution to be sustained at 2% for each wife. This is because each wife in a polygamous marriage should be valued equally.

Thus, to avoid the concern of inequality, it is crucial to take this thought into account. Simultaneously, an equal contribution will also allow for better clarity for prospective polygamous husbands. In supporting the words of Dr Wan Azizah, if a husband is able to marry four wives, indeed, he can then afford to contribute up to 8%.

The current scheme of iSuri has received positive responses especially from the women community. Accordingly, they are a part of our society that needs to be protected. Thus, at this stage, the government should identify appropriate mechanisms and loopholes in the final phase. Certainly, this will not be an easy step. Regardless, for the future of women, the third phase of the scheme should be materialised despite the obstacles.

The writer is a research analyst, Institute for Research & Development of Policy (IRDP)

women
isuri
Related Reports
DPM: Additional RM45 million for i-Suri programme
a year ago
i-Suri expanded to cover Orang Asli and East Malaysian native groups
a year ago
EPF for housewives: 4,365 sign-ups so far
2 years ago
EPF scheme for housewives kicks off on Aug 15
2 years ago