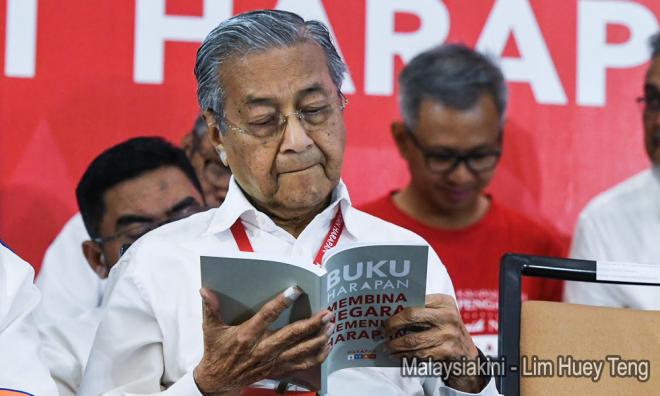 Mahathir and the transition of power

LETTER | "We don't know if the country is ready for a transition of power," so says Prime Minister Dr Mahathir Mohamad recently. It must be shocking to many why he said this. Malaysians will want to know what he meant by that statement.

When Dr Mahathir decided to be part of Pakatan Harapan and showed determination to bring change in the government, the people were ready for the change and indeed voted in Pakatan Harapan instead of BN.

That, in the Malaysian context, confirmed the desire of the people to affect and accept a change. A transition from a corrupt government to incorruptible government. And where rule of law will be upheld.

We must also remember that on March 8, last year, the Buku Harapan was written. Dr Mahathir wrote, among other things:

And, most importantly, Dr Mahathir concluded by stating that we "cannot hope this regime (Najib's regime) will correct itself.

The only way to correct the situation is by bringing in a new government that has the credibility to implement the promises in this manifesto. A change of government will correct the mistakes of the current regime (Najib’s).

So in last year's May 9 general election, the people accepted the promises Dr Mahathir made on behalf of Harapan. They wanted the change.

They were ready and showed their determination for change of power from the kleptocrats to those who were ready to do the cleaning and provide a government with justice.

Have the people changed their course? No, they have not. Instead, it was the government under Dr Mahathir’s helm that had deflected from some of the important promises which could have been avoided.

The Tanjung Piai by-election should be treated, as the people's reminder that if we have the courage and were ready for a change, we still have the courage to whip you back to the correct way should you stray away.

The country was always ready to deny BN power, that is why Harapan is in. However, you can lose it if the aspirations of the people are ignored.

Go back to Buku Harapan. Only that can help you to sustain the trust of the people.

No one needs to fear to do the right thing.

letters
pakatan harapan
buku harapan
mahathir mohamad
Related Reports
Anwar nips 'no-confidence vote' talk in the bud, says Dr M taking Tg Piai seriously
a year ago
Politics in Malaysia is no more the same
a year ago
Yoursay: Will Harapan leaders dare pick up Mahathir’s gauntlet?
a year ago
Immediate transition? Harapan can sack me if they want - PM
a year ago