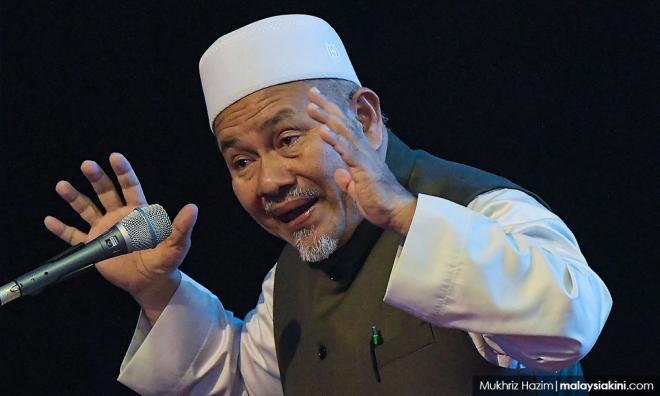 Calls for Lim Guan Eng to step down not right

LETTER| Tuan Ibrahim Tuan Man’s statement calling for the Finance Minister Lim Guan Eng to be replaced in the rumoured reshuffle is as shallow and myopic as his economic acumen.

The PAS deputy president claims that the PAS-governed states of Terengganu and Kelantan received an imbalanced allocation in the recent budget.

Yet somehow he has conveniently forgotten the fact that Kelantan’s development expenditure had been increased from RM1.214 billion to RM1.376 billion for 2019.

In fact, that is much more than Penang which received RM857 million this year.

I invite Tuan Ibrahim (above) to take a moment to ponder on the fact that the Pakatan Harapan gov't allocated a bigger development budget compared to when his current Muafakat Nasional ally Umno was ruling.

I suppose Tuan Ibrahim thinks that more should be given to rural states at the expense of the more urban states.

Unfortunately, this kind of logic reveals his poor grasp of economics.

Does he not understand that because taxation is collected by the federal gov't, it is in the interest of all states for allocations to be spent in the more developed states.

By improving infrastructure, economic contribution will increase, and more taxes will be collected.

After all, where would the federal gov't get the money to channel for development in states like Kelantan and Terengganu?

Penang, for example, is instrumental to the national economic performance of Malaysia.

According to MIDA’s statistics for this year, Penang is currently leading in terms of total investments, attracting RM9.2 billion out of which RM8.7 billion are foreign direct investments.

Economic prosperity has also resulted in increased immigration to Penang. After 11 years of clean governance, its population has spiked from 1.5 million people to 1.8 million by next year.

Despite the big jump in population, Penang has managed to keep its unemployment rate to a minimum.

A check with the Department of Statistics Malaysia revealed that the average unemployment rate of Penang in 2018 in the past 4 years was just a mere 2%, effectively meaning that there is zero unemployment in the state.

In other words, Penang brings great benefits to the country in terms of foreign investment, GDP contribution and even jobs.

As such, does it not make sense for the federal gov't to support the state in order to cater to the demands of a growing population?

Tuan Ibrahim also accuses Guan Eng of not doing enough. Perhaps he should first explain what PAS has done in Kelantan and Terengganu as they have been administrating these states for many years.

Tuan Ibrahim claims that his opinions regarding the Guan Eng's performance is based on “polls and surveys”.

While this is the right method to gauge public opinion, I urge Tuan Ibrahim to disclose his survey findings so that we can validate whether his results were objectively taken from a sample that truly reflects the Malaysian population.

I would like to remind Tuan Ibrahim that effective change does take time.

If every reform that we want to do were to be implemented at once, the result would be anarchy.

One only has to look at the mobocracy that ensued in the Russian economy following the downfall of the USSR. Indonesia also suffered a decade of hardship following Suharto’s overthrow in 1998.

The latest economic blueprint for Malaysia looks at tackling issues that are currently stunting Malaysia’s progression to high-income nation status.

The plan addresses growing inequality stemming from the policies of the previous government and the need to restructure the economy through innovation and knowledge-based community participation with the ultimate objective of building a prosperous and united Malaysia.

As the decade comes to a close, SPV 2030 enables our beloved nation to start afresh, free from the shackles of patronage politics that stagnated our economy for much of the last two decades. SPV 2030’s key to success is the institutional reforms that will take place.

Lastly, a feature of Guan Eng’s style of governance which often gets overlooked is his advocation for the principles of competency, accountability and transparency.

Tuan Ibrahim may turn a blind eye to Guan Eng’s commitment to reform, but even the famed British publication The Economist made note of it, highlighting Guan Eng’s clean style of governance as one of the catalysts for the increase in foreign investment in Penang.

Besides open tenders, another feature of clean governance and transparency is asset declarations.

First introduced by Harapan in Penang and Selangor, it has now been made mandatory for representatives at the federal level as well.

Recently, the deputy speaker of the Dewan Rakyat noted that a large number of opposition MPs have yet to declare their assets and a quick search shows that Tuan Ibrahim is one of them.

Perhaps before Tuan Ibrahim continues to throw stones at Guan Eng, the PAS deputy president should first lead the way by showing us his money.

The writer is the political secretary to Zairil Khir Johari, state assemblyperson for Tanjong Bunga.

economy
finance
pakatan harapan
pas
Related Reports
Don't drag me into this - KJ denies proposing debate on PM transition
a year ago
Stop political infighting, focus on economic issues
a year ago
National rare diseases governance committee set up applauded
a year ago
No interference in awarding of contracts by Agriculture Ministry
a year ago