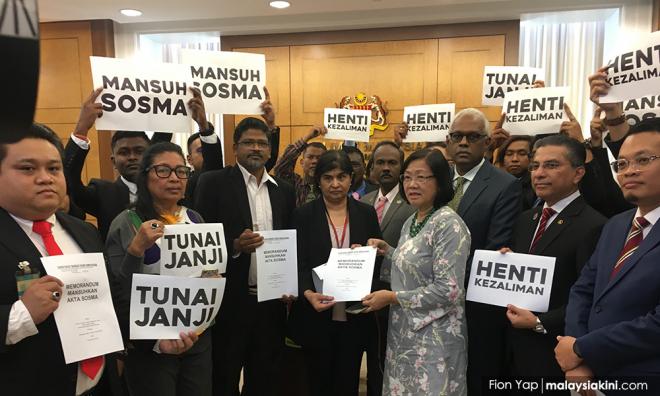 What happened to Harapan's vow to improve human rights?

LETTER | Yesterday was International Human Rights Day, a day to celebrate the progress made on furthering the rights of citizens worldwide.

This is an opportune time to reflect on our own country when it comes to human rights and the many challenges that lie ahead.

When Pakatan Harapan won a dramatic victory in the GE14 elections, they vowed to steer the country forward with human rights as one of their top priorities.

However, since their win, we have seen a heavy regression in the area. The kind of regression that has gotten us worried about our present and our future as a modern, fair, and humane nation.

From the Suaram 2019 report, several areas of abuse were glaring. One was the treatment of prisoners. The government has yet to abolish the Security Offences (Special Measures) Act 2012, the Prevention of Crime Act 2015 and the Dangerous Drugs (Special Preventive Measures) Act 1985.

These laws have been allegedly used and abused to hold prisoners without trial in the name of "crime prevention". Furthermore, custodial deaths mark an all-time low and horror stories such as the alleged abuse and torture of the 12 alleged LTTE detainees make you wonder whether the police are the protectors, or the villains — a scary thought.

Freedom of speech is yet another human right that has fallen to the sidelines this year. Harapan was vocal about getting rid of the Sedition Act and encouraging freedom of speech before they were elected. This seems to have been yet another unfulfilled promise.

The Sedition Act and the Communication and Multimedia Act allow widespread prosecution of anyone who offends a government official or royal, while human rights defenders and political activists are allegedly silenced.

Don’t even get me started on LGBT rights, rights which are not only ignored but mocked by the Harapan government. This year has been one of the darkest for the LGBT community. Homosexuality can be punished not only by 20 years in prison but by violence as shown by the recent case of several men being caned due to homosexual activity.

Prime Minister Dr Mahathir Mohamad disregarded LGBT rights in a speech last year where he questioned whether LGBT families can be considered real stating, “they call themselves a family”. This attitude only encourages the hostile environment these men and women face daily.

Our indigenous Orang Asli people, people who were promised a better future under Harapan, people who were here before most of us, are still being ignored and treated as second-class citizens.

Starvation air pollution and the stealing of their land is their constant reality. Migrant workers are still facing high levels of exploitation and are at risk of becoming victims of sexual and human trafficking.

The list of human rights abuse is getting longer and the frustration we feel with our government is reaching boiling point.

Malaysia is considered a modern and democratic country, so why are we so far behind when it comes to human rights?

The government should stop pandering to the religious majority and stop focusing on external matters. The rights of the rakyat are being abused.

Harapan is urged to take action to overcome these issues in 2020.

Malaysian civil society as the progressive third force
11 Dec 2019
Suhakam's report in Parliament: A landmark, but more needs to be done
11 Dec 2019
M'sia faces credibility, cronyism and climate crises
9 Dec 2019
Transgender problem in Malaysia exposes our bigotry and hypocrisy
11 Dec 2019
Marina: Equal rights proponents not out to 'dance naked in the streets'
10 Dec 2019