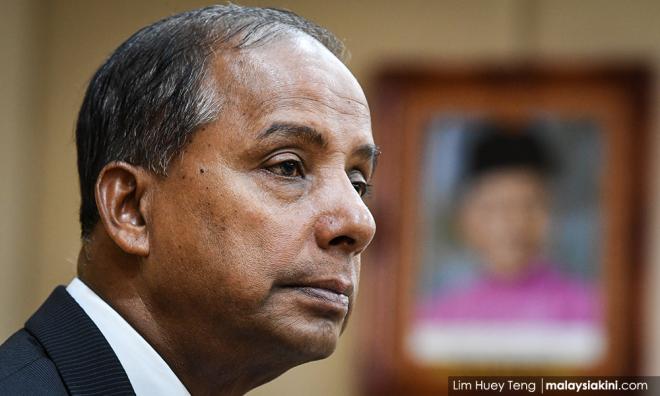 From the onset, Bestinet Sdn Bhd had been a controversial company, not least because it is linked to Abdul Hakim Hamidi, the younger brother to the former home minister and current Umno president, Ahmad Zahid Hamidi.

The company, which owned and operated the Foreign Worker Centralised Management System (FWCMS), had also been embroiled with allegations of money laundering and abuse of foreign workers - allegations the company had denied. The company was awarded the lucrative job during the BN era.

In fact, back in August 2018, Human Resources Minister M Kulasegaran (above) announced that Bestinet was suspended from operating its foreign workers management system. This came in the wake of the Nepalese government barring its workers from coming to Malaysia.

Things came to a head with a public war of words between the minister and Bestinet's executives. Kulasegaran insisted there were strong grounds for the suspension, despite Bestinet's appeals.

Fast forward to Dec 9, 2019, and all is hunky-dory between Kulasegaran and Bestinet. Despite having no investigative powers, Kulasegaran announced in the Dewan Rakyat recently that his ministry had cleared Bestinet of any wrongdoings. He was responding to a question by Lanang MP Alice Lau, who is also the chairperson of the National Institute of Occupational Safety and Health (Niosh), an agency under Kulasegaran's ministry.

The grounds for dismissing Bestinet's alleged wrongdoings had not been clearly articulated. More puzzling is why it was done by the ministry and not the police and the MACC.

Also, one would imagine that having suspended Bestinet in 2018 based on damning allegations, the Human Resources Ministry would have lodged a report with the MACC on this. But as it turned out, no reports were lodged according to Parti Patriotik Nasional pro-tem secretary-general Mohd Zulkifli Abdul Fattah (below, middle). He said this was revealed to him by MACC officials after he lodged a report against Kulasegaran at the anti-graft body HQ last week.

Mohd Zulkifli had further alleged that "intense lobbying" was going on to ensure that Bestinet regains the multi-billion ringgit contract to manage foreign workers online system, which it had lost in August 2018.

The ministry must come clean on this. Even for a government notorious for going back on its words, the Bestinet u-turn is staggering, not just for the billions of ringgit at stake, but the welfare of foreign workers and our country's reputation in the workers' source countries.

Furthermore, if indeed the ministry had made a "mistake" by suspending Bestinet in 2018, what assurance is there that the all-clear given to the company 16 months down the road is the right one?