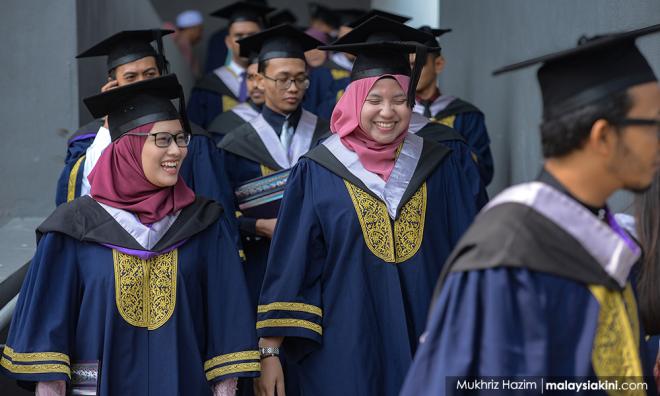 LETTER | When we look at the national unemployment figure of 3.2 percent last October, 512,100 Malaysians were unemployed, the lowest since December 2015.

Compared to the previous month of September, there were 521,400 unemployed, or even when we compare to October 2018, there were 512,900 — both figures are an improvement over the current figure of October last year.

So, what is the problem?

In a nutshell, the problem is youth unemployment which hovers between 10 to 11 percent, three times the national level. Out of the 290,000 youths from 15 to 24-years-old who were unemployed or underemployed, 140,000 were graduates amounting to nearly half of the total unemployed youths.

The main reason behind this problem of graduate unemployment and underemployment is the mismatch of graduate qualifications with the market demand, particularly for highly-skilled jobs relating to engineering and technology.

Partly due to this, the Education Ministry is promoting the teaching and learning of coding and computer skills at both primary and secondary levels to prepare students for the demand in highly-skilled jobs, especially as the economy transitions to the Fourth Industrial Revolution (4IR).

On the other hand, universities are also enhancing and bolstering their strategic linkages with industries and the private sector.

When graduates find it hard to secure employment that commensurates with their qualification and skills, they would have to opt for jobs for which they are over-qualified.

In other words, they would be competing with so-called "low-skilled" jobs with SPM holders.

This snowball effect worsens the figures for unemployment and underemployment and, at the same time, ensure wages remain stagnant.

According to the Malaysian Employers Federation, out of 600,000 jobs which are mostly low-end, only 60,000 jobs are executive level.

So, you can imagine how difficult the situation is when about 200,000 graduates are competing for executive jobs.

This translates into a ratio of one executive job position for every three graduates.

In light of this, the government — through Budget 2020 — has introduced the [email protected] programme to address the graduate unemployment issue and to encourage employers to hire more graduates.

This scheme, which begins this month, is eligible for graduates who have been unemployed for more than 12 months. RM500 monthly will be credited to a special Employees Provident Fund (EPF) account, which also allows flexible withdrawals.

Employers will also receive a hiring incentive of up to RM300 per month for two years.

Finance Minister Lim Guan Eng has announced that RM6.5 billion will be allocated for the next five years under the [email protected] programme as a stimulus to generate employment and up to 350,000 jobs.

This initiative is expected to encourage graduates who have been unemployed to be more proactive in looking for employment.

At the same time, the Malaysian Youth Council has welcomed this incentive as a well thought out move to address youth unemployment and stimulate the economy, as well as prepare for the 4IR.

Many economists and experts believe the scheme will benefit the economy. With the cash incentive, graduates will have extra disposable income to spend or save.

Now, let us look in more detail at how [email protected] can benefit the employer.

With this scheme, they will have a higher propensity to hire unemployed graduates since the RM300 represents new net financial assets.

It helps to improve their cash flow, especially for the small and medium-sized enterprises (SMEs). Specifically, the burden on the employer’s contribution to the EPF will be considerably reduced or even “zero-rated” with particular reference to the employed graduates.

Over time, employers might also be incentivised to reduce their dependence on foreign workers in certain areas such as education, private healthcare sector and tourism.

Employers might also be encouraged to focus more on local graduates as opposed to foreign.

Also, the monthly RM300 received by the employers can be kept aside for training and upskilling of graduates so they will become more valuable as workers that contribute to a skilled nation.

However, this would require both the unemployed graduates and prospective employers to play their part accordingly.

The writer is a research assistant at Emir Research, a think tank focused on strategic policy recommendations.