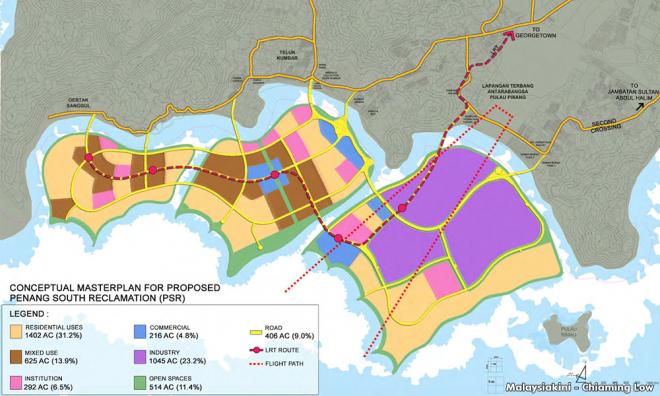 LETTER | The Penang Transport Master Plan (PTMP) kicked off in 2013 with a RM6.3 billion agreement signed between the Penang state government and Zenith Construction Sdn Bhd to undertake the building of three highways and a tunnel. A land swap of 3.7 acres was made in payment for the feasibility studies and detailed designs of the highways.

The Zenith deal has been plagued by MACC investigations and today, almost seven years later, the highways have hardly started in earnest. The groundbreaking ceremony for “the first project under PTMP” was finally carried out several days before the expiry of the Environmental Impact Assessment (EIA) approvals for the highways.

Yet, the Penang chief minister is now in a great hurry to sign yet another PTMP agreement with an uncertain timeline. This time it is a Project Delivery Partner (PDP) agreement with SRS Consortium, for six percent fees, excluding reimbursables. The total value of this project has doubled from RM20 billion to RM40 billion. The PTMP cost totals RM46 billion when the Zenith packages are included.

The Penang chief minister has prioritised three megaprojects in Phase 1 of the PTMP - the Penang South Reclamation (PSR), the Pan-Island Link Highway (PIL) and the LRT. The reclamation is supposed to pay for the two transport infrastructure projects.

The justification for these projects is not supported by any online or publicly viewable detailed plans and documents; lacking are the cost-benefit and comparative analyses to show that they are the best solutions to benefit the local population; lacking are the plans to illustrate that the north-south PIL and Bayan Lepas LRT projects can really ease overall traffic congestion.

There is also the "chicken-and-the-egg" question - is the massive scale of the PSR project conceived to pay for the PTMP? Or is the PTMP unnecessarily bloated to justify the 4,500-acre reclamation?

The three-island reclamation will take 15 years, the stand-alone LRT line will be completed only in 2029 (according to the PSR and LRT EIA timelines), without any plan for feeder services. Bus-users are groaning from the long waits along certain routes, and the apparent unwillingness of government even to reach for the “low hanging fruits” of public transport service improvement. At this rate, Penang mainland residents might have to wait until 2040 for the PTMP to roll out any items in Seberang Perai.

The proposal to buy and sell highways started with Pakatan Harapan’s famous promise to abolish all tolls. As it turns out, the PSR may be funded with proceeds from the sale of highways linked to Gamuda, the 60 percent shareholder of the SRS Consortium. Some called it a “windfall gain of RM2.82bil” for concession holders, “effectively taking all their future profits upfront”. Due to its convenient timing, this buy-out of Gamuda-linked highways might appear too much like a federal subsidy for the controversial PSR project.

The Penang government might argue that PSR is needed to pay the loan and that land value will increase over time.

But the ability to repay is subject to the condition that the market is not sluggish when the reclaimed land is ready to be sold, and that the land can be sold fast enough to repay the loan plus interest. Otherwise, the cost of financing the loan will eat up all the profit gained from sales of the reclaimed land. In the event that the financial aspects of the project are not managed prudently, or the land cannot be sold at the targeted price, the federal government might have to bail out the state government with public funds!

The problematic costings behind the Penang South Reclamation:

Two figures have been bandied around for the 4,500-acre reclamation costs: RM16 billion and RM11 billion for 4,500 acres which works out to be RM82 or RM56 psf respectively.

Either way, these costings are somewhat higher than 1MDB’s Pulau Indah Port Klang reclamation offering for little over RM30 psf and Benalec Holdings Bhd’s Melaka Gateway reclamation, sold at RM34 psf. In January 2020, Benalec, the self-styled “land manufacturer”, had to call off the Melaka land sale due to non-payment.

The reclamation costings set by the Penang government seem to be tied to the potential sale price of the land: RM110 psf for STP2 and Gurney Wharf land which was tagged at of RM1,300 psf in 2013, and RM56 psf or RM81 psf for PSR which could potentially sell for RM300 psf.

However, an engineer will tell you that reclamation works should cost more or less the same anywhere in the Straits of Malacca; the vast difference between reclamation costings in Penang, Port Klang and Melaka cannot easily be explained even by taking into account the depth of the seabed or the distance of the sand transport. This type of non-transparent price-fixing is especially worrying when the client is not a private company but a state government.

What is the projected PSR sale price? Bayan Lepas land nearby normally sells for around RM150 per square foot, although recently commercial land was sold for as much as RM300 per square foot. For low-lying island real estate, a lot of investment into topside development and marketing will be required to make it commercially marketable at RM300 per square foot. The seller of the PSR land will expediently leave out any mention of defects or risks of impending sea-level rise, for fear that banks won’t finance, or insurance won’t cover the reclamation properties in a few decades.

Experience shows that a long-drawn-out reclamation project can be problematic during a slump. Property prices in Dubai’s Palm Islands – the original inspiration for resort-island-type reclamation – has dropped 40 percent since 2016 (a similar discount was held out for the newly reclaimed land in state-owned Gurney Wharf, was tagged at RM1,300 in 2013, but offered at only RM746 per square foot.

The optimistic projections of the proposed PSR might end up in a heap of disappointment, like the Melaka Gateway project. Wade Shepard, author of Ghost Cities, wrote:

“Melaka Gateway was supposed to have been the catalyst that would completely alter the face of Melaka and the southwest coast of peninsular Malaysia, transforming the region from a low-key epicentre of traditional cultures and traditions - a legitimate Unesco World Heritage site - to a modern, booming, economic powerhouse. But the winds of economic fundamentals combined with political upheavals have left the project little more than a stagnant slab of reclaimed land.”

Like Melaka, Penang is exploiting the George Town World Heritage “brand” to sell real estate, while blanking out the ugly reality of its coastal despoliation. The PSR “smart and green” islands are meant to showcase Penang’s economic powerhouse future, but Penangites will not be able to afford to live on the fake islands.

The PSR project targets 446,000 population by 2038. But where will the majority of these residents come from? Just look south to Johor’s Forest City which targeted a population of 700,000, for comparison. In 2017, Tony Pua wrote an article, “Chinese Property Projects in Southern Johor: Should We Be Concerned?” pointing out that, of 23,240 units approved in the Forest City, 98.54 percent of the units were sold to foreigners, 70 percent from China. Despite Forest City’s strategic location near Singapore, the uptake has not been as projected. The Hong Kong-listed Country Garden, developer of Forest City, recently cut almost 400 jobs in a “restructuring” exercise.

In Penang, Tanjung Pinang Development Sdn Bhd, a subsidiary of E&O Properties, carried out Phase A of the 760-acre Seri Tanjung Pinang 2 (STP2), while undertaking a 131-acre reclamation of Gurney Wharf for the Penang government. When E&O Properties made a cash call in early 2019, stock prices tumbled. In December, E&O Properties sought to raise an additional RM1.5 billion through Islamic medium-term notes (Sukuk Murabahah).

Clearly, private developers take risks with shareholders’ money in facing the ups and downs of the property cycle. However, when the Penang government issues sukuk bonds for the PTMP backed by a federal guarantee, it is Malaysian taxpayers’ money which is being risked.

I have been told that projections for Penang’s reclamation property prices were initially done in 2010 when Asian markets were boosted by inflows of global capital. In the meantime, the national property overhang has grown 500 percent between 2014 to 2018, causing the price threshold for foreign ownership to be reduced for highrise properties.

Newspaper headlines shouted that the PSR project would fetch RM70 billion real estate development value. This overstated development potential has excited some Penangites. Realistically, the government might only have 3,000 out of the 4,500 acres to sell – minus roads, public facilities, 15 km coastal parks and bike tracks and so forth. At RM300 psf, this would generate RM39 billion, not even enough to pay for the transport infrastructure.

The Penang government should be very worried about the scale of the PSR project, which is 19 times the size of STP1 (where Straits Quay is located) and six times the size of STP2. The global economic outlook is unpredictable. The oligopolistic nature of assigning a single consortium to manage 4,500 acres of state-backed real estate creation, is another cause for alarm.

Without a detailed financial plan, is it financially prudent for the Penang government, with a projected revenue of RM519 million, to issue RM10 billion in sukuk bonds to start off a RM46 billion transport infrastructure project? Judging from the start-and-stop progress of other reclamation projects, it is unlikely that the PSR will be immune from cashflow problems, delays and cost overruns. The 15-year timeline can easily drag on for a generation or more. A federal bailout would mean further increasing Malaysia’s debt burden – yet another case of “privatising the profits and socialising the losses”.

The Penang government might go ahead and sign the PDP agreement, knowing full well that the decision-makers of today will not be around to foot the consequences. Only one thing is for sure – the Project Delivery Partner will be assured of its percentage-based fees, while the long-term financial risks and burdens, for better or for worse, will ultimately be borne by the Penang people and Malaysian taxpayers.