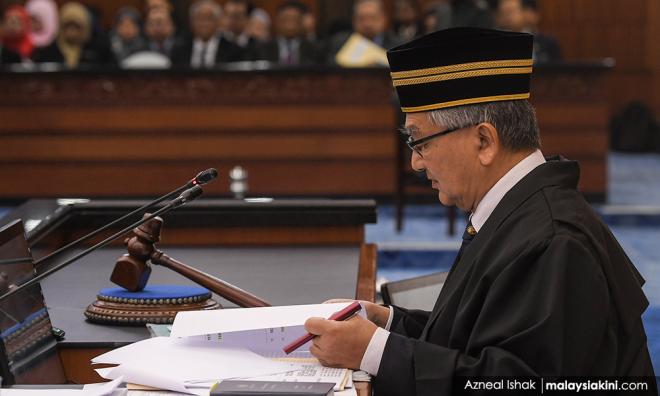 Speaker can decline PAS's proposed motion of confidence in PM

LETTER | There has been much talk about the opposition political party PAS's intention to move a motion in the Dewan Rakyat for a vote of confidence in the prime minister.

While the motive behind this move remains to be seen, let us look at what the Federal Constitution has to say.

(2) The cabinet shall be appointed as follows, that is to say:

(a) the Yang di-Pertuan Agong shall first appoint a prime minister to preside over the cabinet a member of the House of Representatives who in his judgment is likely to command the confidence of the majority of the members of that House.

(4) If the prime minister ceases to command the confidence of the majority of the members of the House of Representatives, then, unless at his request the Yang di-Pertuan Agong dissolves Parliament, the prime minister shall tender the resignation of the cabinet.

Essentially, it means this.

It is the Agong in his wisdom that decides which individual commands the confidence of the majority in the Dewan Rakyat and who is to be appointed as the prime minister.

Of course, the Agong's judgement in appointing the prime minister would necessarily take into account the glaring realities such as the party with the most seats and also consensus amongst the parties with majority seats as well as their agreed nominee for the prime minister, amongst others.

What the Federal Constitution does envisage or contemplate is a situation where there is a cessation of the commanding of majority confidence by that individual he had appointed as the prime minister.

Logic would dictate that such a situation could only arise as a result of a vote of no-confidence by the members of the Dewan Rakyat against this individual appointed by the Agong as the prime minister.

There is no such motion.

If anyone wants the Agong to revisit his earlier judgement in appointing the prime minister, it must necessarily and only be done by a vote of no-confidence through any person (government or opposition).

Until such vote of no-confidence, there is no practical reason for the opposition, in this case, PAS, to re-assert the Agong's judgement in the Dewan Rakyat.

As is stands, the Agong's decision to appoint Mahathir as the prime minister was reached in his wisdom. This wisdom of appointment by the Agong is required by the Federal Constitution and the Agong has rightly done so.

Therefore, with all due respect to PAS, Malaysians wholeheartedly accept the wisdom of their king in appointing Mahathir as the prime minister. There is no requirement, constitutionally or otherwise, for PAS or any other opposition political party for that matter, to waste the precious time of the Dewan Rakyat to talk about something that the king has already decided.

In the circumstances, it is humbly submitted that the speaker of the Dewan Rakyat may respectfully decline to hear this proposed motion of confidence by PAS and instead proceed with other more important and urgent motions which require deliberation by the Dewan Rakyat for the benefit of the rakyat at large.