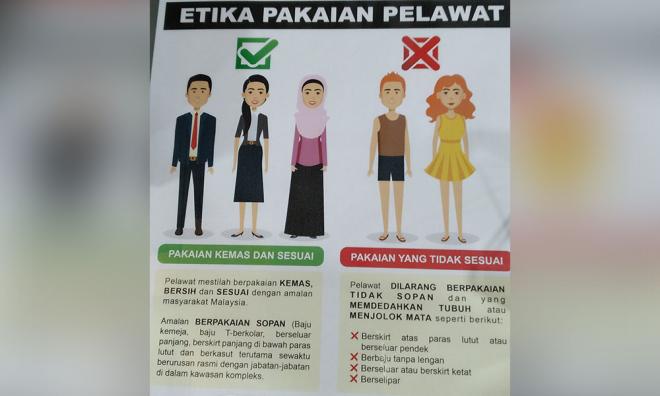 LETTER | I went to the Hang Tuah Jaya Municipal Council (MPHTJ) outlet at Melaka Mall to pay my 2020 assessment bill. I waited for my turn to receive a queue ticket number.

A Chinese girl before me was turned away by the staff manning the queue ticket machine because she was wearing a pair of shorts. I was then also turned away for wearing "shorts"

I told the staff I was wearing a skirt, not shorts. She looked at my skirt and told me it did not cover my knees. My skirt was loose-fitting and just two inches above the knees.

She then pointed at a notice pasted on her counter (above).

I asked the staff, "So you won't let me in to pay my cukai pintu?" and reminded her that this is what pays her salary too.

Grudgingly, she gave me a ticket. When I asked, I was told this dress code ruling came from the "Yang Di-Pertua MPHTJ".

I asked whether the chief minister was aware of this and her reply was, "Of course, it's from the state government".

The previous BN state government had also issued a similar dress code at one time but then-chief minister, Ali Rustam, claimed he had no knowledge of such a ruling.

That dress code was later removed upon his orders after the press exposed it.

Do we still have little Napoleans pushing their weight around in our current Melaka state government?

Does the current Malacca Chief Minister Adly Zahari know about this dress code ruling and is it really on his order?

This dress code leans heavily towards covering most, if not all parts of the body. No slippers too. This is MPHTJ's definition of "sesuai".

What this means is we all have to dress up and make sure we're covered from head to toe - just to pay a bill.

The last time I checked, Malacca was still being run by the Pakatan Harapan government. I do not live in a Taliban or a PAS-led state.

This dress code ruling is racist because we all know that it is mainly the Chinese who would wear attire that exposes the arms and legs.

It is discriminatory because it targets mainly Chinese women. Men in shorts were allowed in.

As a Chinese and a woman, I am insulted and offended by this ruling.

I am also infuriated because the government, state or federal, is a public servant.

It is here to serve the rakyat, not refuse them their right to receive service just because they are wearing shorts.

Someone should remind the YDP MPHTJ exactly who is paying his salary.