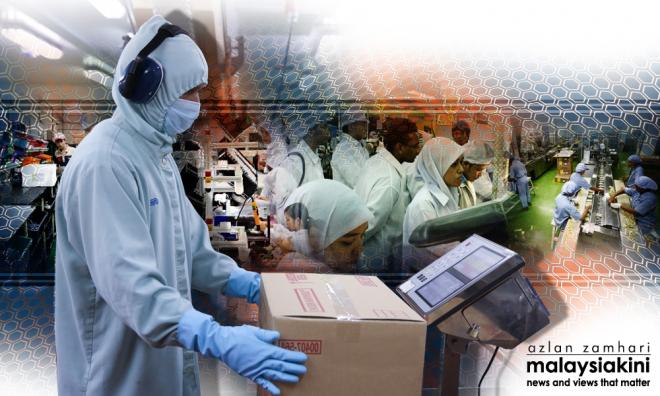 We need to 'flatten the curve' of economic recession - now

LETTER | Now, almost a week into the movement control order, the devastating economic effects of the necessary measures to “flatten the curve” of infections are plain to see.

The shuttered shops and deserted streets are a striking illustration of an economy that, although not at a standstill, is clearly not running at full steam.

The effects of the lockdown come on top of the drop in tourist arrivals and the supply-chain shock due to the lockdowns in China since January.

It will take a few weeks before we get the first indicators that show the true impact on the economy, but that doesn’t mean we can sit idly by until then.

While it is practically impossible at this stage to quantify the impact to GDP, it stands to reason that it will be significant.

Economist Pierre-Olivier Gourinchas calculated that a drop in economic activity of 50 percent in one month and 25 percent in another two months, before returning to baseline, will result in a decline in GDP growth of almost 10 percent!

Initial numbers coming out of China seem to bear out this estimate. Industrial output dropped by 13.5 percent in the first two months of the year.

Urban unemployment soared, retail sales dropped by more than 20 percent, and investment by 25 percent. These figures are unprecedented and significantly worse than what was seen during the global financial crisis of 2008.

Altogether, the Chinese GDP could see a fall of 13percent for January and February, and the drastic lockdown measures only started on Jan 23.

While other countries haven’t yet released numbers showing the impact, there is ample reason to believe that all, including Malaysia, will be affected similarly.

We are now at a stage where massive intervention is required to prevent the economic fabric of the nation from disintegrating.

On top of the first-order effects of the lockdown, individual consumers and businesses would be acting rationally and in their self-interest to cut their spending and investment, but at the level of the economy this risks translating in a vicious cycle of business losing revenue, defaulting on loans, causing banks to reduce lending, hence reducing investment and consumption further, etc.

In order to counter this, to “flatten the curve” of the recession as he calls it, Gourinchas calls for fiscal measures to compensate for all lost income in the initial stages of the contraction.

The cost of this will obviously be huge. As illustrated above, we should assume that it would amount to 10 percent of GDP. For Malaysia, this would mean a fiscal package of RM150 billion. Meanwhile, the measures announced at the end of February only amount to RM20 billion, and some of the measures (like discount vouchers for domestic tourism) are no longer applicable under the movement control order (for comparison, the stimulus package rolled out during the Global Financial Crisis in 2009 was RM60 billion).

On cue, the US is currently debating a stimulus package of some US$2 trillion, or roughly 10 percent of its GDP. Even Germany seems to have bought into this reasoning.

Extraordinarily, the stalwart proponent of balanced budgets and fiscal responsibility announced a suspension of the ceiling on new government debt enshrined in the Constitution.

The fiscal stimulus package they announced amounts to €356 billion, also some 10 percent of GDP.

Can we afford a similar effort? Malaysia’s debt to GDP ratio is similar to Germany’s, for illustration. Yields on Malaysian government debt reached their lowest level in February, although they rose since then, obviously in response to the global economic uncertainty.

The dynamics of capital flows are obviously fundamentally different between Malaysia and Western economies, and they certainly pose a constraint for fiscal policy, as does the crash in oil prices, which affect revenues.

Nonetheless, there should be room for a vastly bigger stimulus package, financed by additional government borrowing.

How to spend cash influx

How should the money be spent? In previous notes we have already highlighted the need to compensate lost income for businesses and individuals.

For the former, financial support should enable them to keep their employees and safeguard their production capacity.

For the latter, income support ensures their ability to maintain their lifestyle. Most of the measures proposed in the previous stimulus package are valid, but generally speaking, they need to be increased in size and expanded in scope to cover the entire economy, not just selected sectors and workers.

For businesses, this support could take the form of additional funds for already-existing public entities providing company financing, for example, the lending facility announced in the previous stimulus package.

In addition, the government should consider setting up a fund that can take direct equity stakes in failing companies.

Bank Negara will also have to increase the funding available to financial institutions to ensure they keep providing financing and ease loan terms (for example, a temporary moratorium on loan payments.)

If the support to companies works as intended, most employees should keep receiving their income, and indeed, maintaining employment should be a condition for companies to receive support.

However, for the unemployed, existing programmes such as the Employment Insurance Scheme, should be increased in size so payouts can reach a level that is comparable with what the newly-unemployed worker earned previously.

The scheme should be expanded to also cover freelance workers in the gig economy, and even consider payouts to workers in the informal economy, since this represents a significant part of our overall economic activity.

Similarly, payments to the B40 group at this time should also be expanded, for example to an additional RM1,000 per month for the 4.1million households who are recipients of the Bantuan Sara Hidup (BSH) scheme over the next two months, since they are disproportionately at risk of greater hardship.

For proportion, such a measure would cost about RM8.2 billion. The government should also consider providing subsidies to low-income students to purchase a laptop and an internet connection so that they can follow online courses. The key is to ensure that income levels of both businesses and workers do not drop significantly due to the pandemic, and that future production capacity is protected.

One important caveat is required here. Because the nature of the economic shock requires extraordinary action, measures targeted at companies so that they survive and maintain employment are justified. However, care should be taken to avoid the situation where losses are socialised and profits privatised, as happened in 2008.

Support for companies should come with clear conditions, first of all a guarantee to maintain the employment of all workers. Next, companies that receive support should agree to suspend dividend payments for the next five years, and stop using stock buybacks. Strict limits should also be imposed on executive pay.

Once this crisis is behind us, a long and hard look at the fragilities in our economic system and how to address them is necessary, with policy measures to match. But for now, bold and immediate action is required to save our economy as it is.

PM: Money for equipment-strapped MOH, states including opposition ones
23 Mar 2020
Putrajaya's new motto should be 'do whatever it takes'
23 Mar 2020
Sepanggar MP contributes entire month's salary for those in need
23 Mar 2020
Don't be stingy, economist tells gov't in facing Covid-19 crisis
22 Mar 2020