LETTER | In 2018, I wrote a letter, which Malaysiakini published, titled LGBTQ Malaysians deserve a better future, in which I demanded that the incoming Malaysian government stop the criminalisation, persecution and discrimination against members of the LGBTQ+ community.

Two years later, LGBTQ+ Malaysians continue to be discriminated against and marginalised, and worse, violently attacked, arrested, caned, or imprisoned under the order of the Malaysian government.

Muhyiddin Yassin, the current prime minister of Malaysia, dedicated government funding to promote homophobia and told a national counselling conference in 2012 that “the symptoms of sexual orientation disorder like LGBT, which was previously faced by the Western society, are now faced in our society, and that the profession was needed to curb the spread of LGBT groups”.

This directly contradicts expert medical opinion. For example, in 1990, the World Health Organization declassified homosexuality as a mental disorder. Unfortunately, after decades of progress made by many countries around the world, Malaysia continues to criminalise same-sex relations.

This is also the prime minister who greenlit government departments such as Jakim and MCMC to monitor LGBTQ+ activities online, creating privacy violations and safety concerns. Censorship laws enforced under this prime minister’s regime have been used to restrict LGBTQ+ people’s freedom of expression and make it impossible for them to organise, let alone protest for change.

Under this prime minister’s watch, a lesbian couple was publicly caned while five men were sentenced to jail, caned and fined for attempting gay sex. These government-sanctioned attacks against the LGBTQ+ community are homophobic, inhumane, and clear violations of basic human rights.

The backdoor appointment of Muhyiddin Yassin as the current prime minister, the return of the former ruling Barisan Nasional coalition, and the entry of the Islamist Pan-Malaysian Islamic Party (PAS) into the government have led to the creation of an ultraconservative ‘Malay-first’ government that further suppresses democratic voices and ignores calls for equality for all Malaysians, including LGBTQ+ citizens.

This abrupt formation of a conservative, racist and homophobic government coalition with members from the corrupt BN regime and radical Islamic party PAS is unprecedented and runs foul of essential democratic values such as liberty and social justice.

Since Muhyiddin manoeuvred his way into the prime ministership, there have been calls by purported PAS members to push for an oppressive agenda that will turn Malaysia into an even more conservative society. This regressive agenda promotes a stricter version of Islam that calls for Sajat, a local transgender entrepreneur, and other LGBTQ+ members, to be arrested and flogged.

Such homophobia and transphobia exhibited by religious bigots are deplorable. No one should have to fear for their safety and livelihood due to their sexual orientation or gender identity.

Section 377 of Malaysia’s archaic penal code criminalising same-sex relations with fines, whippings, and up to 20 years of imprisonment has fostered fear among Malaysians who identify themselves as LGBTQ+. The rise of conservative religious groups has created a hostile environment that perpetrates homophobia and transphobia, pushing LGBTQ+ Malaysians deeper into the closet. 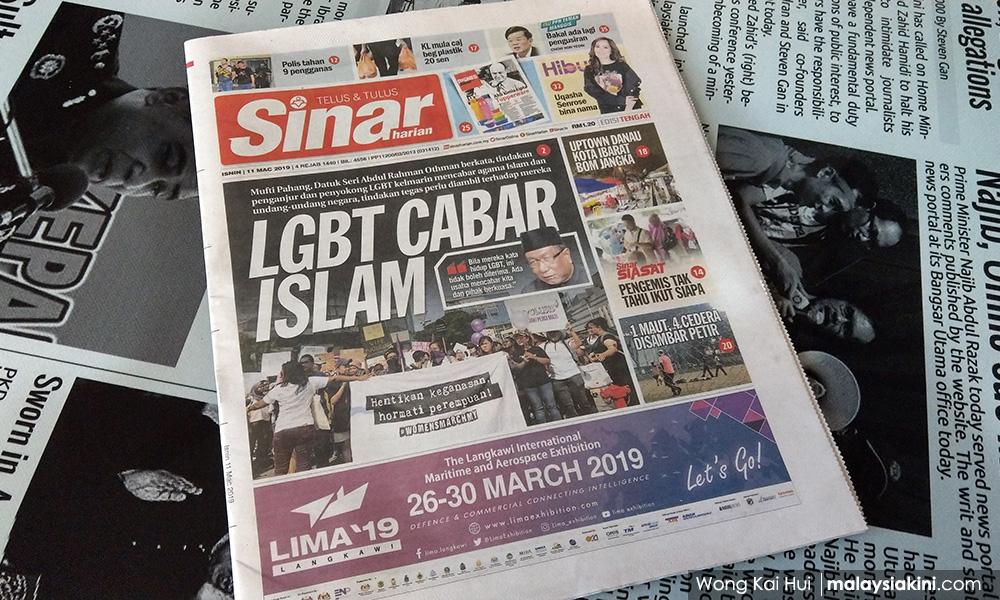 Freedom for all Malaysians requires freedom of LGBTQ+ individuals. The liberation of LGBTQ+ individuals will lead to a better Malaysia that finally holds the government accountable to respect Freedom of Speech, Expression, Press and Religion. Unfortunately, this future is not possible under the current regime that wrangled power through undemocratic, backdoor means with a prime minister known for his false, dangerous and racist ideology of Malay supremacy.

LGBTQ+ identities were celebrated around the world during the virtual Global Pride event at the end of June. As an openly gay Malaysian who celebrated Pride month, I call for a multiracial government coalition led by a new political leader who is committed to progressive change and social justice for all.

I call on the Malaysian government to take an active stance against homophobia and transphobia. I call on police officers to stop the violent policing, harassment, and arrests of transgender people. Transgender Malaysians have experienced disproportionate levels of police and gang violence and government-sanctioned imprisonment.

I call on Prime Minister Muhyiddin to immediately release all LGBTQ+ detainees who were arrested and imprisoned due to their sexual orientation or gender identity. I also call on the prime minister to ban conversion therapy and make it illegal for politicians, religious leaders and public institutions to endorse or promote anti-LGBTQ+ propaganda.

Conversion therapy is widely recognised by experts as an especially dangerous practice that forces many LGBTQ+ teenagers into depression and suicide. In 2018, Theresa May, the former prime minister of United Kingdom, issued a public apology for the UK’s colonial anti-gay laws. It is time for the Malaysian prime minister to publicly apologise and acknowledge the severe trauma that has been inflicted upon the LGBTQ+ community and work towards repealing anti-LGBTQ+ laws so that no Malaysians will have to live their lives in fear of who they are and whom they love.

Transgender activists of colour who challenged the status quo through riots and bold resistance played a major role in the history of Pride. Their activism has shown that progressive change can occur if people are willing to be bold, speak up and challenge authority.

The current prime minister and corrupt members within his political circles sidestepped democratic electoral processes that all Malaysians have the right to exercise. This violation of democracy and faith in the political process should be publicly condemned; the current regime should surrender the governing power to a progressive, people-powered multiracial coalition that advocates for true equality for all Malaysians regardless of their race, religion, sexual orientation, or gender identity.

Until this happens, I will continue to be vocal in the fight for LGBTQ+ rights in Malaysia and spotlight human rights abuses and homophobic policies perpetrated (or maintained) by the current regime. I look forward to the day when LGBTQ+ Malaysians can live their life openly and proudly, without being persecuted. Pride month may be over, but the fight for LGBTQ+ equality continues. Happy Pride.

HANS HOW is a Malaysian gay man and LGBTQ+ activist championing the continued fight for LGBTQ+ equality. You can find him on Twitter @HansHow00. He is also vice-president of AsylumConnect, a tech non-profit providing the first resource website and mobile app for LGBTQ+ asylum.