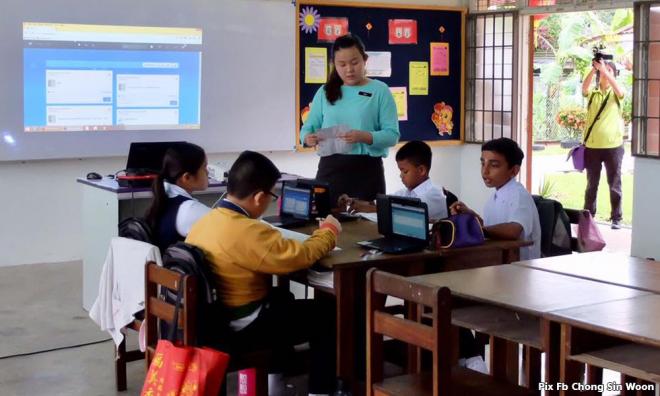 LETTER | Teaching of science, mathematics in English not unpatriotic

LETTER | First of all, I must put this on record – I am not in any way unpatriotic nor anti-Bahasa Malaysia. The fact that I am writing this is sufficient testimony that I love and care for my country and I am as patriotic as any other loyal Malaysian.

Over the last 50 years, the education system has been through numerous changes, both in terms of content and medium of instruction. I have had the privilege of experiencing all these changes, first as a student, then as a trainee teacher, followed by more than 20 years of teaching.

While some of these changes were good and in line with evolving times, many others were not progressive moves which tend to negate our aspirations towards achieving greatness and advancement. The latter includes the injection of too much religious content, the complete usage of Bahasa Malaysia in teaching and the mode of administration through the education system.

As a result, we can see the system and the standard of our education sliding from bad to worse. One good indicator of this negative trend is the proliferation of a range of alternative education facilities, with an increasing number of tuition centres, home schools and private and international schools.

These alternatives help to prop up the academic results of our students to a certain extent. However, fees charged by private and international schools are way beyond the reach of ordinary Malaysians.

As a nation with its own national language, it remains an indisputable right of the government to make it a policy to have the national language as the medium of instruction in all its schools. This is an accepted fact and nobody should question this and nobody has, but since it is a man-made policy, people can also adapt to current needs and make modifications towards having the finest blend in its education policy to move the nation towards greater heights.

There is nothing unpatriotic in doing this as the ends will justify the intended means.

Destroying any nation does not require the use of atomic bombs or the use of long-range missiles. It only requires lowering the quality of education and allowing cheating in examinations by the students.

Allowing this would result in patients dying at the hands of future doctors, buildings collapsing from the designs of future engineers and money being lost through unqualified accountants etc. But the worst impact would be uneducated and unsophisticated citizens having voting rights, who could easily be persuaded by politicians with malicious intents.

"The collapse of education is the collapse of the nation." These wise words were that of the late Nelson Mandela. It serves to remind us of the importance of having a quality education system that will churn out future generations of compatible calibre who are capable of keeping abreast with the rapid rate of advancement and changes.

English author Joseph Addison’s wrote: "Education is a companion which no misfortune can depress, no crime can destroy, no enemy can alienate, no despotism can enslave. At home, a friend; abroad, an introduction; in solitude, a solace; and in society, an ornament. It chastens vice, it guides virtue, it gives at once grace and government to genius. Without it, what is man? A splendid slave, a reasoning savage."

If we adopted this view, we could have a wholesome education system which would be capable of taking on the best in the world.

The latest reversal on the policy to use English in the teaching of science and mathematics (PPSMI) was based on a survey carried out by a team of so-called experts from our universities.

According to a report, the 2006 study showed no significant improvements were achieved in the PPSMI project. Hence, they decided to abandon the PPSMI programme.

There were two reasons given for this failure. One was the difference in the availability of Internet access between rural and urban schools, and the second was that the pilot project involved the training of teachers in this programme to be carried out in Bahasa Malaysia.

I regard both reasons as extremely flimsy and lame. We learnt English in the 60's without even knowing what a computer is, let alone the Internet and Bestarinet. Personally, I consider the other reason offered as even more ridiculous. How can we hope to achieve proficiency in English when we are trained in Bahasa Malaysia?

I strongly feel the authorities should have adopted the same approach when the government was making a switch to use Bahasa Malaysia as the medium of instruction in schools back in the 60s.

The then “Bulan Bahasa Kebangsaan” still rings loud and clear in my mind, as I was an active participant in various inter-school Bahasa Kebangsaan contests and competitions then. I consider it a resounding success as many of us from that era did very well in the language, and I went on to be the first batch of teachers to be trained to teach in Bahasa Malaysia, and subsequently, I proudly graduated from UKM as one of its pioneers.

UKM pioneered in the full use of Bahasa Malaysia as its medium of instruction and to do this, most of my lecturers were imported from neighbouring Indonesia.

Again, I consider this comparison as not valid as these countries had used their mother tongue as the medium of instruction for decades and most importantly, they encourage the use and teaching of English in a big way.

Most European countries have a second language subject as a compulsory subject in their curriculum. Moreover, their hunger for knowledge in science and mathematics is manifold that of Malaysians. More than 75 percent of research and findings are documented in English.

In conclusion, I sincerely appeal to all those who are in policymaking to consider the views expressed above, and hopefully, make the bold step of initiating a long-term policy of using English in PPSMI.

No more flip-flops and let Malaysia move forward, along with all other countries. Quarrelling over this over and over again will only serve to stagnate the country’s progress.