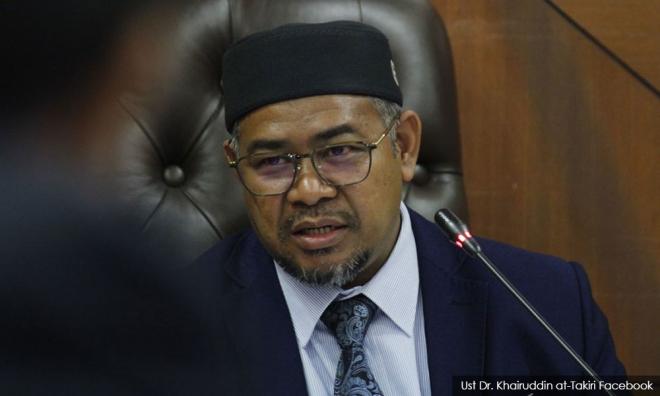 LETTER | Lately, there has been quite a number of statements by political elites related to the consumption of alcohol. In a debate on the Road Transport (Amendment) Bill 2020 to propose heavier fines for drink driving offenders, PAS’ Pasir Puteh MP Nik Muhammad Zawawi Salleh claimed that all religions forbid alcohol consumption.

Lately, Prime Minister Muhyiddin Yassin has said that only pubs and bars have yet to resume businesses, but he feels that it may be a good thing if they don’t open at all.

PAS minister Khairuddin Aman Razali (above) – who caused uproar for not complying with a mandatory 14-day quarantine after returning from Turkey – is reported to have stated that pubs and nightclubs should be closed permanently.

Analysing these statements, one could draw a conclusion that there is a tendency among the political-religious elite to suggest their moral norm on the rakyat using the justification of their own scriptures and simplistic reading of scriptures of other faiths without understanding the complexities of a given issue, or whether such a suggestion of morality would automatically be accepted by a pluralistic society.

The question is, can a society which is multi-ethnic and religious in nature accept a morality that is imposed from a particular religion? Can morality be narrowed down to mere obligation or would it be better to see it from the perspective of internal happiness, where people are educated to make right choices based on spiritually self-developed moral conscience and reason?

It seems that Malaysia’s ethnoreligious political leaders are guided by the morality of obligation that is narrowed down to set off beliefs and rules that are exclusive, instead of being guided by the conscience that comes from the heart of a person where choices are made responsibly and voluntarily, without being imposed by external coercion.

A society based on conscience is an uphill battle in Malaysia because the Islamist has integrated politics of power with religion that has divided the Malaysian community on basis of Muslims and non-Muslims, and made worse by the bigotry of religious exceptionalism.

While there are moderate Muslims who have tried to bring some reason to the public discourse, their voices have been subdued by extreme influential ethnoreligious elites that are part of the current Perikatan National government.

Malaysian society today needs a world view that is based on spiritual connectivity and solidarity that is beyond race and religion to build a conscientious society. The Rukun Negara mentions the belief in God in universal language that is understood by the people of all faiths.

Issues such as corruption, poverty and inequality and even excess alcohol consumption are issues of conscience that cannot be reduced to the dualistic and reductive understanding of religion. There is also a sociological and psychological dimension of such ills that need to be addressed.

Therefore, for the betterment of Malaysia, it is vital for conscientious Malaysian political leaders to create a society of moral conscience based on self-awareness and education that moulds character, instead of a society that is ruled by a moral obligation that is imposed by the external elites.

RONALD BENJAMIN is the secretary of the Association for Community and Dialogue.

letter
politics
morality
Related Reports
COMMENT | From immorality to hero: Am I the only one baffled by PAS?
4 Sep 2020
LETTER | It pays for all of us to be more courteous
1 Sep 2020
MP SPEAKS | Let every Malaysian come forward and reunite
10 Aug 2020
LETTER | Put racists to shame
16 Jul 2020