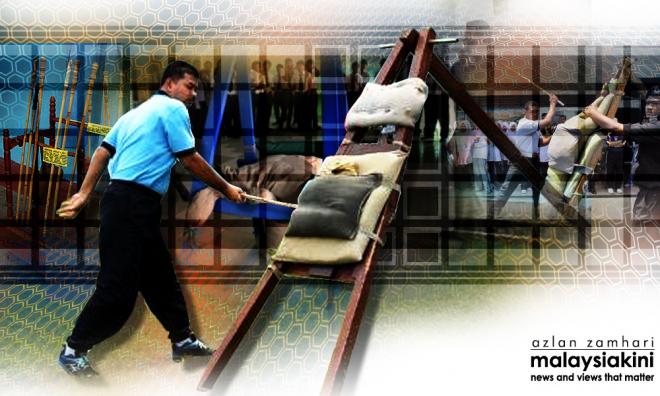 LETTER | Whipping as a deterrent punishment

LETTER | Whipping for the commission of serious offences has been viewed by the human rights activist as inhumane and cruel to the extent that many countries have abolished whipping as a punishment from their statutes, such as India and the United Kingdom, pursuant to the Indian Abolition of Whipping Act 1955 and the Criminal Justice Act 1948, respectively.

In Malaysia, whipping is contained in the penal statutes and was first introduced by the British in the 19th century, formally codified under the 1871 Penal Code Ordinance of the Straits Settlements.

In all cases, the whipping is inflicted on the buttock of the offender by specially trained officers.

Thinner canes are used on white-collar criminals for offences such as bribery and criminal breach of trust.

A youthful offender is also subject to whipping but its infliction mode would be in the same way of school discipline namely, with a light rattan.

However, three categories of persons specified in Section 289 of the Criminal Procedure Code (CPC) cannot be sentenced to whipping, namely women, men above the age of 50 except those convicted of rape and unnatural offences, and men sentenced to death. The exclusion is mainly because of the intrinsic gravity or severity of the punishment.

In relation to its infliction, Section 290(1) of the CPC provides that the punishment will not be inflicted unless a medical officer is present and who certifies that the accused is in a fit state of health to undergo such punishment.

Further, Regulation 133 of the Prison Regulations 2000 provides that at the infliction of every sentence of corporal punishment the officer-in-charge and the medical officer shall be present.

The medical officer shall give such directions for preventing injury to health as he may deem necessary, and the officer-in-charge or any other officer appointed for that purpose shall carry such directions into effect.

In relation to a youthful offender, although a medical officer is not required to be present at the time of the execution, the whipping sentence nevertheless will not be executed unless the court is satisfied that the offender is in a fit state of health to undergo the whipping.

If during the execution of whipping, the medical officer certifies that the offender is not in a fit state to undergo the remainder of the sentence, the whipping will be stopped.

In such a situation, Section 291 of the CPC provides that the court which imposed the sentence has to revise the sentence and may in its discretion either remit the sentence or sentence the offender in lieu of whipping, or in lieu of so much of the sentence as was not executed to imprisonment for a term which may extend to 24 months.

In the event the earlier punishment is imprisonment, then the additional imprisonment should run consecutively to the original period.

The additional term of imprisonment however is subject to the maximum the court can impose on the offender for that particular offence.

It is indisputable fact that whipping for the commission of serious offences is excruciatingly painful which would result in extensive soft tissue injury.

In the assessment of a sentence, the main consideration is the question of public interest. Public interest demands that law and order must be maintained at all times, and a deterrent sentence ought to be passed for the commission of serious offences.

The purpose is to discourage the offender from repeating his crime and further, the would-be offenders would be discouraged from breaking the law.

In any case, the sentence imposed on the offender must reflect the revulsion felt by the great majority of society for the commission of a particular crime.