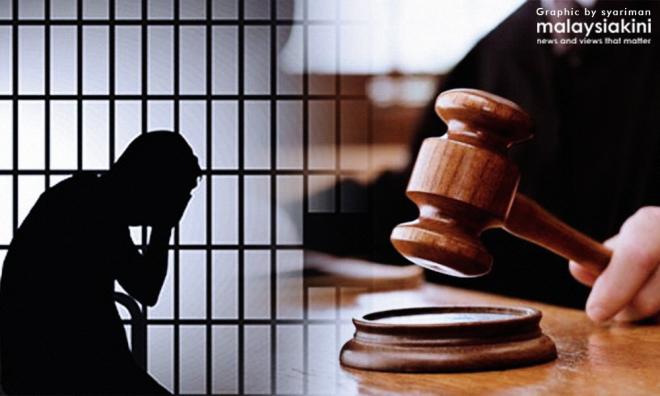 I refer to the Malaysiakini letter Crowded prisons - grant bail to under-16s, women and the infirm.

The writer has urged the courts throughout the country to consider granting bail for all accused persons under the age of 16 years or any women or any sick or infirm person who is accused of a non-bailable offence as provided under Section 388 of the Criminal Procedure Code (CPC).

But for accused persons who have already been refused bail by the court and therefore remanded pending trial, the granting of bail for such accused persons will have to be done under Section 389 of the CPC. This will involve a proceeding for each accused person before a High Court judge and a host of other court personnel.

Already, the Gerakan vice-president has called for the health authorities to take a firm stand and introduce stringent measures immediately to contain any potential infection which may have occurred when the prisoners were taken to public places. He has even called for the closure of the courts if the situation warrants.

The best alternative should be to act under the Prisons Act 1995 (Act 537). Section 3 of the act empowers the home minister to “declare any house, building, enclosure or place, or any part thereof, to be a prison for the purposes of the act for the imprisonment or detention of persons lawfully in custody.”

In addition, Section 8(1)(b) of the act provides that wherever there is an outbreak within a prison of a disease which renders it necessary to provide for the temporary shelter and safe custody of any prisoner, the commissioner-general of prisons may, with the approval of the home minister, direct that prisoners be put in the shelter and safe custody of temporary prisons. A temporary prison shall be a prison for the purposes of the act.

Since the outbreak of the pandemic, the home minister has twice exercised his powers under Section 3 of the act. The first was in April when he declared seven places as temporary prisons under section 8 of the act, namely the Malaysia Prison College, Kajang, the Prison Officers Training Centre, Taiping, the Malaysia Correctional Institute, Melaka, the Malaysia Correctional Academy, Langkawi, the Prison Officers Training Centre, Kota Kinabalu, Taman Wira Hall, the Sandakan Prison and the Ehsan Hall, Tawau Prison.

The second was in June when the minister declared the Correctional Centre Muar, Johor to be a prison for the purposes of the act.

It looks like the home minister will have to exercise his powers yet again to declare a place nearby the Alor Setar Prison as a prison or temporary prison.

The Singapore experience of Covid-19 outbreak in crowded dorms that were homes to more than 300,000 low-wage foreign workers from countries like India and Bangladesh, who mainly work in industries like construction and manufacturing - perfect conditions for the virus to spread - informs us that the healthy prisoners will have to be taken out to other prisons. Infected prisoners will have to be isolated and treated.

The success of Singapore’s measures is now in the numbers - only four new local cases, all of which reside in dorms.

So let’s hear it from our home minister.