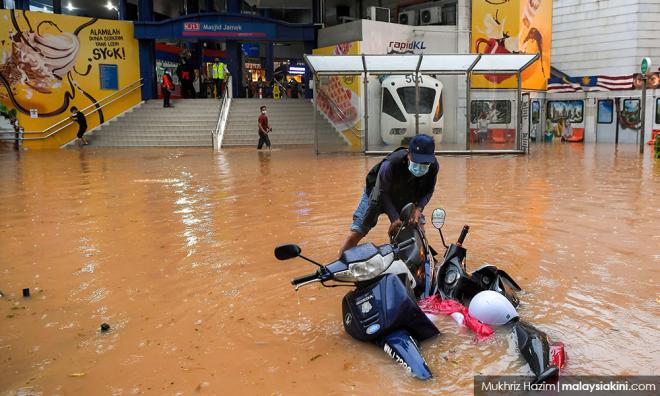 LETTER | Malaysia needs to do more on disaster risk reduction

LETTER | Every year, Oct 13 marks the International Day for Disaster Risk Reduction (DRR) with a call by the UN General Assembly since 1989 for a day to promote a global culture of risk-awareness and disaster reduction.

The country’s well-coordinated responses to the current Covid-19 pandemic demonstrates our ability to put in place clear vision, plans and competent, empowered institutions, acting on scientific evidence for the public good.

Similar responses and high priority is needed to respond to the climate emergency and the impending crisis.

In 2010, the country came up with a National Climate Policy on Climate Change that underscores the country’s commitment to institutionalise measures to integrate crosscutting issues in policies, plans, programmes and projects in order to increase resilience to climate change.

The nation needs to expedite efforts in putting in place a National Adaptation Action Plan to guide legislation, governance, planning and coordination of adaptation measures as well as an adaptation index to measure vulnerability levels of the country against climate change impacts.

More urgency is needed in these efforts, as the reality on the ground shows the country is not moving in the right direction, with business-as-usual development projects and plans, as we are not planning or preparing adequately or at all for the current and impending climate impacts.

Many questions arise in this regard. Are our policymakers and planners at all levels of government, including the architects and engineers sufficiently aware of the current and impending impacts of climate change? Are we planning for future threats and disasters?

We see the promotion of massive ‘business-as-usual’ infrastructure projects of highways, tunnels, reclamation works and building construction, with little or no regard for climate change risks and impacts.

There does not seem to be enough consideration given to whether such projects contribute to increasing climate resilience or if they undermine them.

We have to sound the alarm bells even louder and adapt (if possible) to the ‘new normal’ of climate change impacts. We have to also be ready to face situations where adaptation is no longer possible.

In Singapore, for instance, addressing the challenges of climate risks and impacts are already on board at the highest level of government, with the prime minister himself talking about climate change risks for the island state. It has been estimated that it would cost S$ 100 billion or more to protect the island state against rising sea levels, and measures are being undertaken with a long-term perspective.

Surely, we too should also be embarking on investing in adaptation plans and measures that build the country’s climate resilience.

Urgent responses are needed now, and we can learn from what other countries are already doing. There are also international funds available to us, such as the United Nations Framework Convention on Climate Change’s Green Climate Fund that has resources to help countries cope with the climate challenge.

Clearly, there has to be a reset button in the way we do things to secure our futures, in a climate-changing world. We have to begin to relook at everything we do from a climate change lens. For otherwise, we will be making wrong investments that will not be sustainable in the long-run, and which would be a colossal waste of scarce public resources.

Forest and soil conservation measures, including the protection of watersheds and rivers to prevent and mitigate against floods, turning urban areas into “sponge cities”, and the strengthening of our coastlines through mangrove forest protection and rehabilitation are all vital parts of the plan.

Clearly, a lot more needs to be done and with extreme urgency. For otherwise, we may be totally unprepared for future disasters, with catastrophic consequences.

MEENAKSHI RAMAN is the president of Sahabat Alam Malaysia.