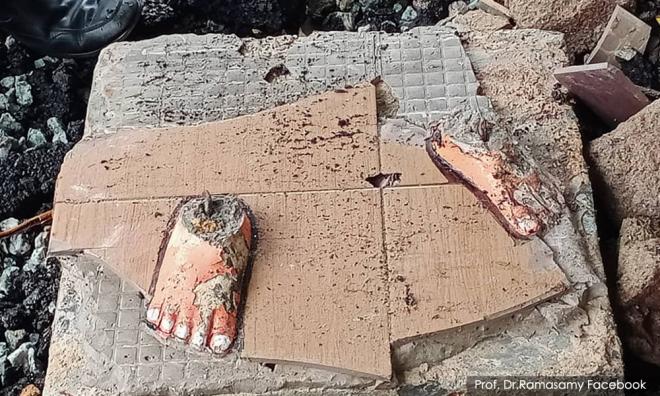 LETTER | The loud boasts of the Minister of National Unity Halimah Mohd Saddique recently in Parliament that the demolition of non-Muslim places of worship in Kedah would cease was rather premature.

During her visit with others including the Minister of Human Resources M Saravanan, she was assured by the Kedah PAS government that the demolition of non-Muslim places of worship would stop.

Thus, with another demolition of a Hindu temple on Dec 1 and other non-Muslim places of worship earmarked for demolition, Halimah's assurance in Parliament remains a farce.

As a representative of the Indians, Saravanan remains a mute spectator to the tragic events in the Indian community. Hardly a few months after the infamous destruction of a temple in Alor Setar, another has taken place.

The Majlis Bandaraya Alor Setar (MBAS) took advantage of the Covid-19 lockdown to destroy another Hindu temple - the Sri Raja Muniswarar Temple -which is more than 50 years old in Taman Bersatu, Kuala Kedah.

I understand from reliable sources that the authorities in Kedah taking advantage of the pandemic are planning further demolitions of non-Muslim places of worship.

I further understand that since the PAS government came into office several non-Muslim places of worship have been demolished in the name of road expansion, their illegal status, the encroachment of state land and other excuses.

A few months back MBAS with the strong backing of the Kedah Menteri Besar Muhammed Sanusi Mod Nor, demolished a century-old Hindu temple opposite a railway station in the name of road expansion.

The temple was destroyed in the early hours of one morning and subsequently, a majestic tree, hundreds of years of old, was cut down to ensure that the demolished temple would not take shape under the tree.

There was no road expansion whatsoever and the place was converted into a parking lot for motorcycles. So much for the honest and integrity of government officials in Kedah.

Apparently, among other municipal and city councils, MBAS has proven to be the most active when it comes to the demolition and removal of non-Muslim places of worship.

It cannot be denied that these agencies have the support of the overzealous PAS government in Kedah.

The destruction of the temple in Taman Bersatu was by MBAS. Although notice was given before the action, the absence of an alternative place made it not possible for the temple to be relocated.

If the Sri Raja Muniswarar Temple could exist for more than 50 years, why has it been suddenly destroyed? The land on which it was situated might have been state land but does this warrant destruction?

Recently, the menteri besar said in the Kedah state assembly that the government might not give financial assistance to temples and non-Muslim places of worship but nonetheless, the state government would be fair to them.

So the indiscriminate demolishing of this temple was it an act of fairness as assured  by the menteri besar?

On Hindu religious matters, PAS depends on Indian members who have some kind associate membership with no voting rights. In the case of temple destructions, these so-called “Indian advisors” have hardly any role.

For some pittance thrown at them, they are more than prepared to justify the actions of the PAS in temple demolitions. Yet they have the gall to define themselves as “Indian representatives”.

Despite the charade and propaganda of tolerance, democracy and justice, PAS is a party with powerful ambitions. It’s religious and political agenda is clear with regards to non-Muslims' way of life, culture and religion.

The writer is deputy chief minister (II) of Penang and state assemblyperson for Perai.