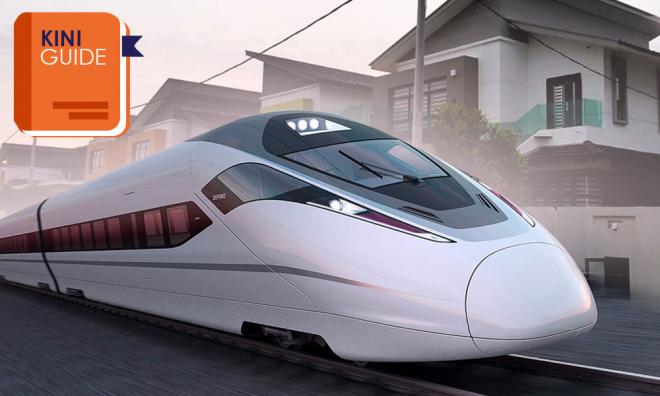 LETTER | Before travel restrictions were imposed due to the Covid-19 pandemic, I flew between KL and Singapore several times a month for work. I must say I am quite familiar with the air travel between both countries.

So, when the government last week decided to cancel the Kuala Lumpur-Singapore High Speed Rail (HSR) project linking both countries, I feel it is the right move. From Day One, I have had reservations about the project.

First of all, flights between Malaysia and Singapore, particularly from KL were aplenty (at least before MCO) and the prices were reasonable due to the intense competition among the airlines plying the route.

In fact, the KL-Singapore airspace is among the busiest in the world. It typically takes about two hours, or slightly more, for one to arrive in Singapore after factoring in travelling time to KLIA and the check-in process.

The HSR promised to cut travelling time to around 90 minutes, only marginally faster. And we still need to factor in the price of the train tickets. Unless there's a critical mass, I believe the HSR ticket would be markedly more expensive than flying.

Air travel between Malaysia and Singapore was quick and easy and choices aplenty, at least before the lockdown. From the business travellers standpoint, there's no pressing need to provide alternative transportation.

Besides, with Covid-19 now upon us, it is unnecessary, if not irresponsible, to spend a staggering RM43 billion to build the HSR project. So much more can be done by the government with that amount of money, particularly to help the vulnerable groups hit by the pandemic.

If I may do simple arithmetic, RM43 billion if disbursed equally to all 30 million Malaysians, including babies and the elderly, will see each one of us given some RM1,433. A family of four will get RM5,732. Imagine just how much that would mean to the B40 group now hard hit by Covid-19.

Of course, that's not how the HSR costing - or wealth distribution - works, but my simplified calculations are meant to draw attention to the astronomical sums involved.

Besides, Malaysia has a knack for building infrastructure because that's where the politically-connected make their money. Just look at the Port Klang Free Zone (PKFZ), which was modelled after Dubai's Jebel Ali Free Zone but has only become a huge financial burden on taxpayers due to the earlier mismanagement and corruption.

Some have argued that the HSR would have an economic spillover effect, especially in towns where the stations would have been built. This argument, while valid, does not address the problem of alleviating the hardship of people throughout the country, not just several towns along the 350km stretch the HSR tracks were planned out for.

The "spillover effect" would have been addressed by the Gemas ETS project, which links KL and JB via rail. Just like how KL is now well connected to Ipoh and Penang via the ETS rail service, the Gemas double-tracking rail project will connect the federal capital to the southern parts of the peninsula. While the trains are not as fast as the HSR, they do provide comfortable alternative transport to those who do not wish to fly or drive.

I know a lot of friends who take the ETS to Ipoh, Penang and beyond, whether for work or leisure. The comfort and facilities like WiFi onboard make ETS an appealing choice if they want to avoid driving or flying. Towns like Kampar and Batu Gajah have enjoyed the spillover effect from the ease of visitors reaching there and I foresee the same success for the southern stretch of the rail tracks.

To me, the HSR is a project for which the time has not yet come. I don't doubt that one day we would need to revive the HSR, perhaps linking Singapore and Kunming in China, an idea floated in the 1990s. For now, there are more pressing matters at hand and Malaysia has made the right choice not to proceed with the project until a more suitable time.

YOURSAY | With leaders like ours, S'pore can eat us for lunch
3 Jan 2021
Umno man decries 'murder' of Johor economy as KL-S'pore rail shelved
3 Jan 2021
'Bad economy' throws KL-S'pore HSR off track and other news you may have missed
1 Jan 2021
Johor DAP urges Putrajaya to propose replacement for HSR
1 Jan 2021
Loke, Najib call for govt to be transparent on HSR cancellation
1 Jan 2021
HSR agreement with S'pore terminated, Malaysia to pay compensation
1 Jan 2021