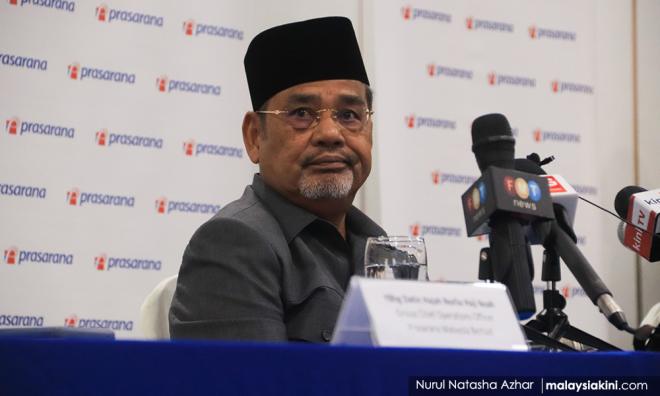 LETTER | After Prasarana's sound and fury, the chairperson has to go

LETTER | Prasarana Nasional Berhad should apologise to the public and journalists who had to sit through its chairperson Tajuddin Abdul Rahman’s online press conference on Monday.

The two-hour-long circus was full of sound and fury that some may describe as signifying nothing, only to be undone with a press statement issued with much less pomp, if with more facts and sense, half-an-hour later.

Rather than closing the loop on their arguments and winning public opinion, what Prasarana and Tajuddin may have done is open themselves up to potential lawsuits and dig themselves further into public disrepute.

Tajuddin alleged that bumiputera contractors were not being treated fairly by MRCB-George Kent (MRCBGK), the turnkey company for the Light Rail Transit 3 (LRT3) project.

He even brought up that there was a non-Malay consultant, and even named the jolly fellow in the press conference, in relation to his allegation.

I do hope the fellow is looking at ways to take Prasarana and their chairperson to task for what may be seen as tantamount to defamation.

In their immediate response, MRCBGK noted that 39.7 percent of their contractors were in fact bumiputera, well beyond the government-mandated 30 percent bumiputera quota, all thus far having been dealt with fairly, with no reports to support Prasarana’s claims.

The burden of proof lies with the accuser in any case and naming a person in the open for such allegations without definite proof may be seen as quite despicable.

Tajuddin then alleged that MRCBGK only put up RM10 million in capital and should put in some of their own funds and continue with construction works.

To which the company replied that they had been pumping in RM200 million out of pocket to keep the project going since July 2020.

MRCBGK countered that the payment made in October was for work done up until June 2020, with no payments made by the transit service and project owner for certified work since July onwards.

Tajuddin even targeted the press, namely Malaysiakini and The Edge, asking them to break journalistic ethos and name their sources.

At the same time, he also said that Prasarana’s CEO was suspended with pay due to “insubordination”. To whom was the CEO insubordinate, exactly, and in what way?

Those questions were never answered. The chairperson then went on to admit that Prasarana could not make payment to the contractors because they did not have enough money.

Later on, Tajuddin said that the contract for "Latitude 8", with a gross domestic value of RM1billion, was granted to a company in which his relatives are shareholders in 2012.

Thus, he said, there is no conflict of interest - to paraphrase, he was a businessperson who was in the midst of cari makan.

However, seeing as how the project has been delayed since 2019, why has Prasarana not sued the contractor for failing to meet the deadlines? Why not terminate the contract without cost and reopen the tender?

Tajuddin also said that he suggested Prasarana should move into Latitude 8 and make it their headquarters, which will be on prime real estate in Kuala Lumpur.

Did he not just say that Prasarana was strapped for cash and unable to pay their contractors? So why move into a glittering new headquarters in the prime area of Kuala Lumpur when you can sell the building and make RM1 billion to pay your contractors?

Quite frankly, moving Prasarana to Subang Jaya would actually make sense, since it would mean their staff would have to take their own trains and boost ridership, rather than get stuck in the nonsensical traffic of the city.

Are Prasarana’s image and a billion ringgit office building built by a company, 20 percent of which is owned by the chairperson’s family, more important than the public-serving LRT3 rail project?

A project that will bring the people of Klang and Shah Alam into the city centre, alongside servicing the needs of about 10 million people in the Greater Klang Valley?

Because, if the image is so important to Prasarana, here’s one suggestion that won’t cost a sen and will be cheaper in the long run - get rid of your chairperson.

The continuous inconsistencies and haranguing of the media throughout the press conference makes a mockery out of Umno, out of the already fragile Perikatan Nasional government, out of Prasarana as a government-linked company, and quite frankly, out of the minds of Malaysian people and journalists who had to sit through such a debacle.

Hopefully, Umno, the Ministry of Finance that owns Prasarana, the Ministry of Transport and the cabinet itself can see how making Tajuddin chairperson of a government-linked corporation was unwise.

And quite honestly, some heads in Prasarana should also roll for agreeing to go along with such farce.