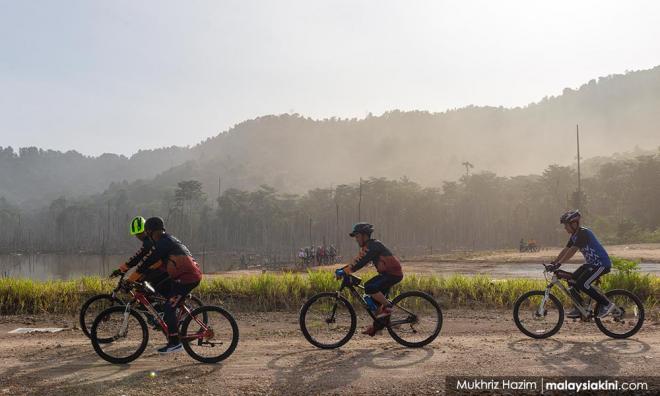 LETTER | In geography, banks are lands alongside rivers. These government reserved lands are known as river reserves and cannot be bought for private use. But left on its own, they could be covered with undergrowth, occupied by squatters or used as illegal dumping grounds.

At long last, the Ministry of Environment and Water had started building trails along riverbanks last year for recreational activities such as jogging, cycling, angling and picnicking.

Although 43 trails totalling 210 kilometres had been built, they remained largely unknown.

If those who cycled for sport or leisure were to be aware, they could have opted for such trails rather than dice with danger pedalling on busy highways or trunk roads. These cyclists would automatically become the ‘trail patrol” ala “highway patrol” and be the eyes and ears for the Environment and Water Ministry.

Under the National Trail Programme, 10,000 kilometres of trails would be built at selected riverbanks in the country by 2030, at the rate of 1,000 kilometres per year. The ministry secretary-general Zaini Ujang said his ministry would collaborate with state governments to develop and beautify a collection of river reserves and turn them into public parks for recreation.

As a certified trainer for the ‘Travel and Tours Enhancement Course’, a programme that was introduced in 2012 by the Ministry of Tourism, Arts and Culture (Motac), I have been advocating better use of riverbanks when conducting the module on ‘Responsible Tourism’.

I have also included it in my articles whenever I wrote about ‘Community-based Tourism’ as many rural settlements have rivers running through them. If the Environment Ministry genuinely wishes to promote eco-tourism, it must work with Motac, as many people have a poor understanding of tourism, including those in state governments and local authorities.

In the past, access roads were built to many waterfalls and mountain streams in the name of tourism, but picnickers quickly turned these pristine sites into garbage dumps infested with rats and flies. After enjoying roaring sales, hawkers did not clear the rubbish left behind.

While picnicking is for leisure, tourism is a business which is only sustainable when it generates enough income to pay for maintenance including sanitation, and also provide for the safety and security of visitors in the vicinity.

While no structures should be constructed on river reserves, some of the private land next to them could be used to build restaurants with toilet facilities and even chalets at choice locations. These operators would ensure the surrounding area is clean, safe and secure to attract visitors.

As for eco-tourism, it means tourism that is friendly to nature, not to exploit it. Sitting on a boulder with legs dipping in the cool water and enjoying nasi lemak may be a paradise for many Malaysians, but such backward mentality does not bode well for the progress of our society.

It is no surprise that many of our rivers are used for indiscriminate dumping of garbage and whatnot, our mountains and hills stripped bare, exposing the laterite soil and turning floodwaters looking like teh tarik. And recently, severe clogging has resulted in floods worsening and the water took longer to recede.

Perhaps the greatest loss suffered by our country was the desecration of our virgin jungles and immaculate rivers, much of it irreversible and irreparable, no thanks to corrupt politicians and officials in government working in cohorts with greedy businesses.

If the remaining jungles are conserved, they would become the greatest attraction for foreign tourists over the decades to come and not our cities, as the vast majority of people in future will be living in metropolises and will want to head to tropical rain forests for their holidays.

For truly long-term plans, the Environment Ministry could start planting banyan trees along elevated riverbanks. These trees have roots above ground that can also be found on branches. Should an aerial root grow down from a branch and reach the ground, it would grow big and thick like a tree trunk.

With human intervention, a branch can be led to keep growing sideways, supported by new roots that have grown into trunks. Although still connected to the mother tree, each of these root trunks can grow independently as a banyan tree on its own.

As tourism requires publicity, we could announce to the world that Malaysia is planting trees that will grow to be the widest in the world on selected riverbanks, to be launched by the Environment Ministry. These banyan trees will be led to grow a kilometre each way and spanning two kilometres wide.

The launch could be recorded and uploaded in YouTube. Nearby, enterprising landowners could offer visitors to plant family trees that can grow for over a thousand years. They can also have the names of ancestors, family members and relatives engraved on a large cement slab using a chart to illustrate the family tree or history.

The names of new-borns could be added later, and the growth of the tree would be looked after and shown over WhatsApp by the landowner for a fee. These tourists would return repeatedly for gatherings and hug their family trees, feeling connected as the site turns more sacred.

Likewise, we should treat our jungles and rivers as sacred, and atone for past sacrilege. We must change and develop our mindsets and the same should apply to our riverbanks. Let us hope that the Environment and Water Ministry can go beyond the superficial and start something our descendants can be proud of.

Always remember, “We do not inherit the earth from our ancestors, we borrow it from our children.”