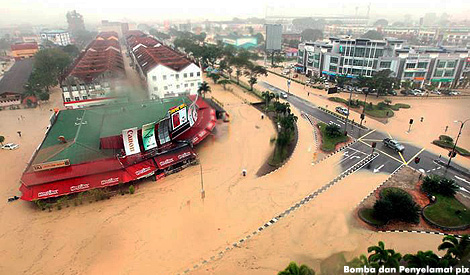 LETTER | Don't you get it? Climate change is causing floods

LETTER | Yesterday, Malaysiakini reported that more than 40,000 people have been displaced by the floods and are taking shelters at relief centres. The flood situation shows no sign of abatement when the same report noted that rain is expected to continue in the states hit by the floods.

This is not unexpected. Scientists have long warned that long-term global climate change causes more extreme weather patterns. These, in turn, make floods more likely. Therefore, I was neither shocked nor scared when I learned about the current flood situation.

What scares me instead is the lack of discussion which identifies climate change as the main culprit for the flood situation we find ourselves in. While many politicians had helped the flood victims, few, if any, have reached out to the public to explain that climate change is the main cause of the increasingly severe floods.

For example, judging from their recent posts on social media as of the time of writing, specifically Facebook, Environment and Water Minister Tuan Ibrahim Tuan Man has yet to make the connection; neither has Yeo Bee Yin, former energy, science, technology, environment and climate change minister.

But politicians are not the only ones missing the connection between climate change and increasingly severe floods. The media have also not done so. Whilst it might be argued that the role of media is to report what is happening in a neutral manner, it is my opinion that they should play a more active role and educate the public on the link between climate change and floods.

Blaming others, particularly the politicians, is only too convenient and does not solve the predicament that we are in now. Each and every one of us – the government and the governed – has to first understand how climate change causes severe floods and then take the issue seriously.

If we do not, I dare say the floods would get increasingly out of control and scarier as the years go by.

WONG CHANG FU is a graduate of the National University of Singapore, where he studied climate change law, among others.