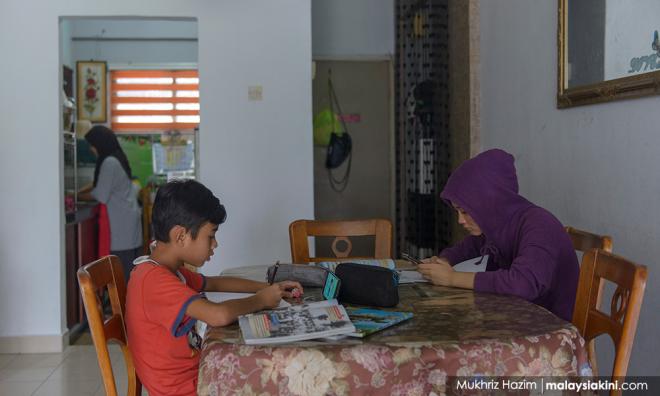 LETTER | If there is anything this current government has been fed with but refuses to acknowledge is the anger, frustrations, appeals and tears of the Malaysian people. Since the pandemic started, our grievances have doubled, and our frustrations have fallen on deaf ears.

Scrolling through Twitter is likened to reading writings on the wall. All we do is stain the timeline with gravities that no one cares about, and they walk past it, words soon forgotten. Never had I experienced such blatant disregard for Malaysian welfare as I do now, in my lifetime in this country.

The pandemic accentuated all the gaps and crevices which had existed since time immemorial. What we are experiencing is not necessarily “new”. It is just that the current climate has made old wounds fester again, and we are bleeding more quickly than ever.

One particular issue that has personally make me want to throw a couple of (left blank for your imagination) against the wall is the declining quality of our children’s education. Many Malaysians have been juggling work, homeschooling, housework, and bored, unhappy children for almost a year.

Teachers are drained of their enthusiasm, having wracked their brains to accommodate technology and the temperaments of their students and their parents for months. What else can they do?

I teach at the university level. My students are in their early 20’s but even I grapple with the lackluster online environment in every other class. I cannot imagine what it must be like to teach six-year-olds or teenagers.

Teachers, I salute you.

Online learning is hard on everyone but undeniably, it must be the hardest for those who are unequipped with the basic learning skills. What if you are in Year 2 or with 8-year-olds who have yet to know how to read and write? Can you do a little bit of maths?

Surely, this would infuriate anyone, let alone a child. To think that 1.5 billion children suffer from early school years illiteracy worldwide, and in that number, that there are at least over a thousand Malaysian children. It breaks my heart.

Some of you may not so wrongfully perceive that most Malaysians can read and write, especially if you are from an urbanised state like Selangor or Penang. I am sorry to relay this to you, but according to data collected by the Untuk Malaysia team from January to February 2021, out of the 1,176 schoolchildren that were reported as unable to read, write or calculate, 35.3 percent came from Selangor.

Another shocking headcount comes from Kuala Lumpur and Johor. It is therefore wrong to assume that illiteracy is geographically determined.

Many studies have been done to look at the long-term impact of school years illiteracy, or illiteracy in general. The general finding is that, if not tackled quickly, illiteracy can lead to many social ails and impediments to personal growth. Individually and collectively, illiteracy is a matter to be taken seriously.

The cohort of students that are academically challenged and who were about to start school in 2020 or have been kept out of school since are the lost generation. The nomenclature is not intended to label a permanent state of doom. It is a tool to provoke us into action. These are young children; the number 1,176 in the data collected by Untuk Malaysia consists of primary schoolchildren. They are about 6- to 12-year-olds.

They have hope and they have a bit of time, but we must be swift and determined in our efforts. The government needs to be held accountable too. This is a matter of national interest as well as our duty as adults to protect the children’s individual rights to grow and prosper.

Among the most prevalent long-term impact that may afflict the lost generation is multigenerational poverty. Data has shown that eight out 10 lost generation children come from a B40 household.

There are already existing environmental challenges to learning in many B40 households, and the burden of not being able to catch up with lessons online due to the inability to comprehend notes or participate in activities could, as research has shown, encourage children to drop out from school.

In other words, children who already live with limited resources and fundamental learning skills could very well find schooling to be a waste of time and favour more economically substantial undertakings.

Dropouts and illiteracy have further ramifications. Unemployment and crimes soar in numbers in countries with high illiteracy rates. The lost generation is less likely to secure stable jobs and may resort to criminal activities to sustain their livelihood. Even among children who eventually learn to read and write at a later age, say for instance in secondary school, they have already missed out on very crucial lessons.

This could disrupt their performance in national assessments, hence decrease their likelihood to enter universities. While it is true for some that tertiary education is not the only ticket to financial stability, these “some” are the exception to the rule.

We cannot wager our children’s future on a game of chance. The narrowed chances of securing stable employment are detrimental to our economy. It lessens purchasing power of a valuable number of our society and widens the gap between the economic classes.

There are other salient but less explicit consequences to illiteracy. Deprived of the essential skills inculcated through education, the lost generation is more likely to fall into a web of social injustice, are unable to participate actively in governance, or to criticise or even identify an unjust system.

History has indicated that psychological slavery is most possible when a society is intellectually deprived. Illiteracy is a shackle; it binds a person into a wheel of destitution with limited options.

Imagine, I plead with you, imagine, these children we are ignoring because they are not ours. I would not be entirely proud of my daughter one day if she were to succeed at the expense of someone else’s child, because she has the privileges which I deny — through my inaction, laziness, arrogance or ignorance— to another child.

It does not only become a problem for a few individuals but also for the country. As it is, this beautiful country is hanging by a thread. Everyone is suffering in their unique ways. We have largely become sceptical of the government, so I beg you, do not become sceptical of each other. There is hope, and there is a way for the lost generation.

The writer is a volunteer at Untuk Malaysia.