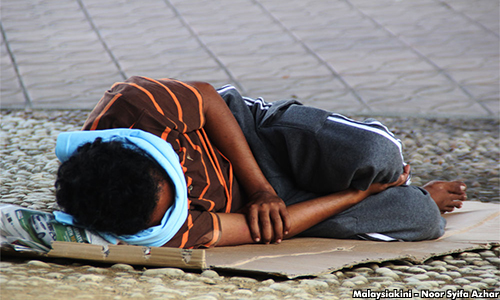 LETTER | Put in place people-friendly policy for the homeless

LETTER | As someone who has taught and carried out research in social studies at tertiary level, and been involved in social work for more than 30 years, I would like to bring to the attention of the minister and deputy minister of Women, Family and Community Development the difficulties encountered by the homeless in accessing the facilities and assistance made available by the government to help them alleviate their hardship.

Homeless people are victims of circumstances and do not wish to be in the state they are now in. They are likely to be alone, with no family connections, with little education or even illiterate. Some are physically challenged due to injury or sickness which makes it difficult for them to lead normal lives, let alone get back into the mainstream society.

Fortunately, for the existence of soup kitchens, which were almost closed down by one irresponsible minister in 2014, these homeless and destitute are able to have a decent meal every day. Incidentally, these soup kitchens are run by NGOs.

The homeless should be given access to the welfare benefits provided by the Social Welfare Department, which is under the Women, Family and Community Development Ministry. Currently, the amount stands at RM500. The amount is certainly insufficient, but helpful enough to tide them over, especially those who are old and those who could not work because of health or other physical reasons.

However, obtaining this financial assistance has proven to be difficult for the homeless. When they tried to register for the welfare benefits, they were told that they must provide an address in their application forms. The irony is that if they have an address, they would not be homeless! NGOs have brought this issue up a few times with the different ministers and deputy ministers in office at different periods of time.

In 2018, the then deputy minister agreed that homeless people could use the addresses of NGOs, which had been helping them. Some NGOs started to help the homeless by registering them with the Social Welfare Department, using their addresses. Unfortunately, the welfare officers rejected the applications. One of the reasons given was that the NGOs did not provide accommodations for the homeless and thus the addresses of NGOs could not be used. Consequently, the NGOs and the homeless are still caught in this Catch-22 deadlock.

I would like to appeal to the minister and deputy minister of Women, Family and Community Development to look into this issue. If a policy has indeed been previously decided at the ministerial level that the homeless could use the addresses of NGOs to register for welfare assistance, this directive must be passed down to the lowest level. If this has not been done, it is high time the ministry took the initiative to do so.

Malaysia has to meet the first and very important target of the United Nations Sustainable Development Goals (SDGs) on "No Poverty" and there is even an All-Party Parliamentary Group on SDGs. If we want to achieve the objective of SDGs - leaving no one behind - surely the homeless are the priority group to start with.

I hope NGOs helping the homeless will have no more unnecessary and illogical obstacles to hinder their work with one of the most marginalised groups of people in our country.

TEH YIK KOON is an academic at a local university.