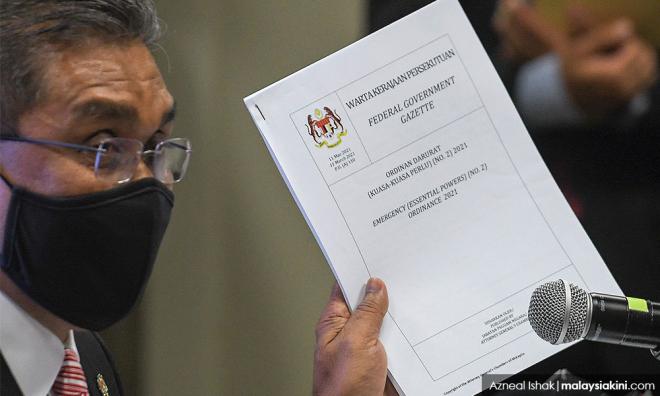 LETTER | Malaysia plunged 18 places in the latest ranking of the World Press Freedom Index from 101 to 119 out of 180 countries surveyed, the largest drop of any country in the 2021 edition. This is unfortunate when just a year ago Malaysia made the largest improvement among all countries.

The drop was not merely because other countries’ scores are improving relative to Malaysia’s, Malaysia indeed recorded the second-highest score increase from 33.12 to 39.47 (note that the higher the score in the index, the worse the press freedom is). Malaysia is now placed under the “Difficult situation” category, together with countries such as Afghanistan, Nigeria, and Palestine.

In March, the government enacted a “fake news” regulation under its emergency powers aimed to curb misinformation related to Covid-19 and the emergency proclamation. In response to Malaysia’s performance in the World Press Freedom Index, the communications and multimedia minister alluded to the newly introduced regulation and clarified that curbing misinformation does not mean restricting press freedom. He is correct in his remark that the two are not in conflict but is that how the situation is in reality?

While misinformation and disinformation are indeed serious issues during this pandemic, especially with the omnipresence of social media platforms as a key source of information, the question is how to effectively counter these issues while not compromising freedom of expression and subsequently build public trust towards authorities.

Limited information leaves room for assumptions and false rumours, fuelling further misinformation. Therefore, to curb misinformation, the government should disclose more information, not less. Transparency builds trust and is the foundation for collective action. Besides, access to information is also a citizen’s right. As asserted by Sultan Azlan Shah, the ninth Yang di-Pertuan Agong of Malaysia and the former Lord President of the Federal Court, “the right to know and the right to free expression are as basic and important as any other fundamental right enshrined in the Federal Constitution”.

Malaysia is one of the few countries that does not have a right to information (RTI) decree (in the form of a law or an actionable regulation) at the national level. As of 2019, 126 out of 193 United Nations member states and two non-member states have an RTI decree. Around 90% of the world’s population and 96% of the population in the Asia Pacific live in a country with an RTI law or regulation. In Southeast Asia, Thailand, Indonesia, Timor-Leste, and Vietnam have an RTI law, whereas the Philippines has an actionable RTI regulation.

It is time for Malaysia to enact an RTI law for citizens to demand information disclosure and provide legal recourse. Merely having an RTI law is not a guarantee that the right to information will be firmly guarded as other aspects such as laws around censorship and press freedom also matter. Nonetheless, it is one of the crucial steps to counter the dominant mindset of “secret by default” when it comes to government information. The substance of the RTI law matters for it to have any effect. A weak RTI law enacted just for show without any real commitment to transparency would do nothing good.

Malaysia can certainly benefit from a stronger and more independent fact-checking ecosystem. Fact-checkers help inoculate readers against misinformed media. They also make it significantly more costly for political figures and political parties to distort the truth and make empty promises. Mostly, a stronger fact-checking ecosystem combats misinformation in a way that does not harm journalism in the country.

Curbing misinformation should not in any way restrict press freedom, which will only erode public trust towards authorities.

ASHRAF SHAHARUDIN and GREGORY HO are researchers at the Khazanah Research Institute.