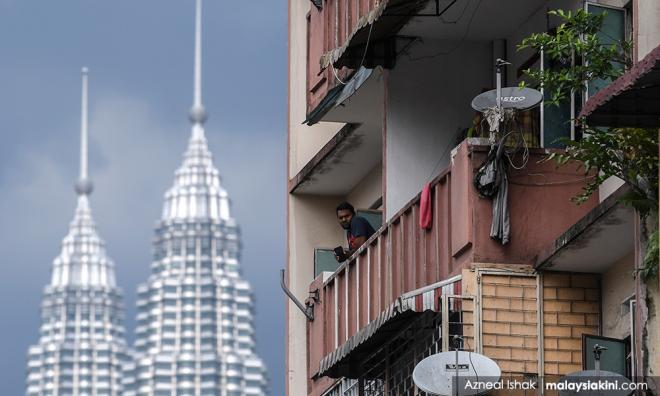 LETTER | I have lived and visited many developed cities abroad such as Toronto, Singapore, Melbourne and I envy their urban planning. I’m currently back in Kuala Lumpur and I can’t help but wonder when will Kuala Lumpur ever reach the same status as the cities I have been to.

I recently explored the city centre at night and felt unsettled by how poorly KL has developed.

There are illegal street vendors taking up pedestrians sidewalks at Lorong Perak and Jalan Bukit Bintang. Even at Jalan Changkat Perak where the Malaysia Tourism Centre is located, there is an abundance of illegal street peddlers which have occupied sidewalks.

These illegal stalls are dirty and lack proper sanitation. It’s just shocking this is still happening in 2021. Many sidewalks have been used by motorcyclists for parking, some even rode their motorbikes on the sidewalks.

Cars are parked haphazardly everywhere by the roadside causing massive congestion in the city centre. What happened to DBKL enforcement?

Roads such as Jalan Yew, Jalan Tun Razak that is the frontage of high commissions and embassies are full of potholes and cement slabs. Crossing the roads still proves to be very stressful.

The intersection at Bukit Bintang and Jalan Sultan Ismail where McDonald's is, also lacks a scrabble crossing which has proven to be effective for safer pedestrian crossings similar to how Toronto and Tokyo have done. Some pedestrian crossings have no signboards to warn drivers.

There is a lack of signboards to show where the nearest MRT/LRT stations are. I don’t even know where some of the GOKL buses stop as there were no proper bus stops, shelters or signboards.

Areas at Petaling Street have many illegal parking touts extorting money from people. There were mat rempit along Jalan Ampang at night doing stunts.

At night, there are also many faulty street lights around the city and prime places such as Kampung Pandan, Jalan P Ramlee and Jalan Ampang. Cars are still parked at the roadside illegally causing congestion.

Road markings and lines have faded in many areas in the central business district (CBD). Commercial areas such as Jalan Doraisamy, Jalan P Ramlee still lack bus routes and proper sidewalks. The blue-painted cycling lane in the city is a joke.

I am disappointed with DBKL lackadaisical approach in developing KL to be a world-class city. Issues from 10 years ago are still choking the city. Why is enforcement still so poor?

Cars are parked illegally by the roadside every day at KLCC, Bukit Bintang and Jalan Ampang. Are there not enough enforcement officers? Why are foreigners allowed to set up kiosks and stalls in public areas on sidewalks? Why wait for residents to lodge a complaint online on faulty street lights?

Don’t DBKL patrol around the city and look for problems? Why wait and see? Why not do and see? I have lodged reports with DBKL but DBKL needs to play its role too.

DBKL needs a reform agenda for Kuala Lumpur, the city looks backward, poorly managed and disorganised. DBKL needs to take the initiative to work with other agencies such as PDRM and JPJ for more consistent enforcement.

Cooperate with RapidKL to better plan bus routes especially at the outskirts and commercial areas. It’s frustrating that in 2021, walking along the streets in KL CBD is still very stressful, dangerous and complicated.