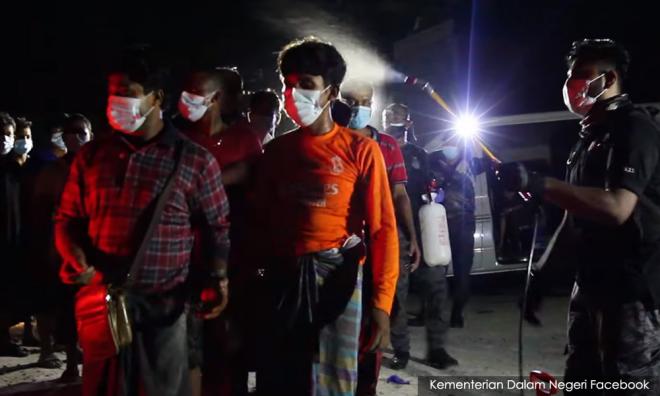 LETTER | The spraying of Dettol on the 156 undocumented immigrants who were arrested at a settlement in Cyberjaya on June 6 by the immigration authorities is not only a disrespect for humanity but also a vivid indication of total ignorance.

Despite the humble appeals by health experts in Malaysia and by the United Nations to put on hold the planned raid during the height of the pandemic and the emergency, the authorities went ahead with the raid.

The appeals made was because of the fear of possible overcrowding in the detention centres which may result in a surge in infections. This was also to avoid a repeat of 2020 which resulted in a sharp increase in infections after the raids were carried out on a few immigrant hubs.

Arresting and detaining the immigrants during this critical period puts a spanner in the government’s plans to control the spread of the virus.

We are already behind schedule in terms of inoculation as the rollout is moving at a snail’s pace.

By carrying out the exercise to spray Dettol, I am not wrong to say that the immigration authorities have crossed their line of duty.

It is a clear case of blatantly ignoring the need to consult the Health Ministry as to what was to be done in terms of controlling the spread of the virus just in case any of the detainees displaced symptoms. This was not the case of disinfecting a public case.

Even if it was disinfecting a public place, it should have been left to the local council.

Of the 156 detained, two are toddlers, four years old each. It is a trauma for these immigrants. For God’s sake please put on hold any further raids that have been planned.

A similar case of spraying disinfectant on a group of migrants who returned to their home state happened in a country in the Indian sub-continent in March 2020. It made headlines in newspapers across the globe including Malaysia.

Why pick during a lockdown to embark on such an exercise?

Don’t just target the undocumented immigrants. The full brunt of the law must be thrown at employers who hire them.

No givers, no takers.

Undocumented foreigners have been a long-drawn problem which goes back to the early 1990s. Several amnesty programmes have been carried out but that is far as it went.

The pandemic is a wake-up call for the authorities to resolve the problem of undocumented foreigners once herd immunity is achieved.

It must be noted that illegal workers are not only a security risk but also a social menace and potential health hazard as bad habits are imported.