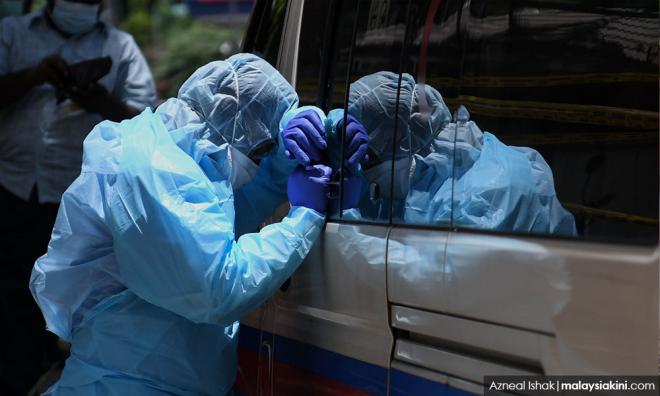 LETTER | Medical profession under siege by a dysfunctional govt

LETTER | When we critically need doctors’ services the most during the Covid-19 pandemic, they are under siege from our government.

When doctors and medical officers who have been overworked under extreme pressure and under impossible conditions try to give suggestions, the government ministers are attacking them.

Although the government refutes the failed state label, it seems what is evident is a fast disintegrating, failing government.

Yesterday, a former press officer who is known to be close to International Trade and Industry Minister Azmin Ali openly attacked Dr Noor Hisham Abdullah, the Health Ministry (MOH) director-general, blaming him for the current Covid-19 crisis. This does much damage to the people’s already shattered confidence in the government’s handling of the health crisis.

Last week, it was Housing and Local Government Minister Zuraidah Kamaruddin’s officer who made an uncalled public attack on Dr Adeeba Kamarulzaman, who is a WHO expert on contagious diseases, when she tried to advise on good sanitation practices.

With the recent wide revelation from health practitioners from main hospitals in Klang, Ampang, and Selayang of the appalling and scary situations there, the government should be sympathetic to them and the rakyats’ cry for help.

It even prompted Prime Minister Muhyiddin Yassin to visit the Klang Hospital.

At the same time, the authorities, including the police, are investigating doctors and the general public on their black shirt protests regarding contract doctors’ uncertain future and other related issues in the face of the health crisis.

While we are struggling to cope with an impending disaster, the politicians’ pride and ego take great precedence over the need to give due respect to the plight of the long-suffering rakyat and the medical community.

Blame games and washing dirty laundry in public are the last things the rakyat want to hear on the very day a record over 11,000 infections were reported. How could they have any confidence and trust in this perpetually feuding government?

Does the government not practice collective responsibility? The government decides on the policy and the medical team in MOH implements them. Why shift the blame and problems on the doctors alone?

Whether it is the state, the government, or the whole country that is failing, one thing for sure is that we are disintegrating as a cohesive functional unit as a nation.

The government, with the ministers and government servants in open disagreements and at loggerheads, who could the rakyat turn to?

Even the Malay rulers’ directive to convene Parliament and state assemblies have been greatly resisted.

If the most critical medical sector, that is the people’s main hope to be their saviour, is under siege by our very own government in a critical time of crisis, what hope do we have?

Given the dire state we are in right now, the rakyat’s hope is with the medical profession rather than with the chaotic, dysfunctional government

Together with the government’s own internal political bickerings and musical chairs, how else can we describe our beloved Malaysia, except as a runaway failing state in the making of our own.