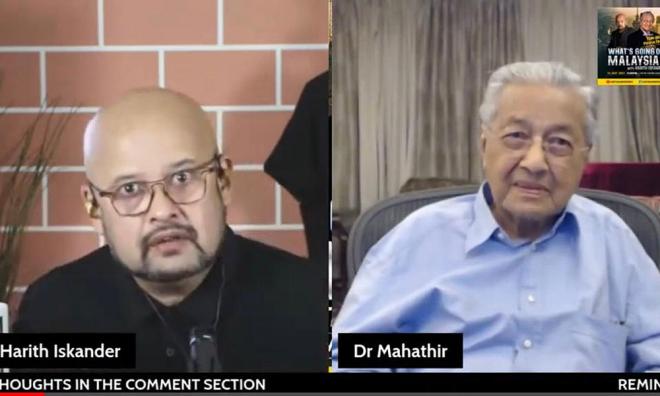 LETTER | I think most of us who watched the live-streamed show on July 14 featuring Dr Mahathir Mohamad with host Harith Iskander would conclude that Mahathir sincerely believes in the sanctity of his political mission, and how best to achieve that mission.

As Harith said at the close of the programme, "we may not agree with everything Tun says, but he spoke from the heart".

There’s little doubt that Mahathir is a man of high intellect. But some touted remedies for our nation’s ills seem contradictory.

For example, the doctor said several times that Malays must be united, decrying the present proliferation of Malay-only parties. Yet, over a short time span, he helped add two more to the list.

He opined that party-hopping (which triggered last year’s Sheraton Move and Sabah state election) resulted from too many Malay parties and because “everyone wants to be PM”. He thinks it’s now time to delegitimise party hopping. When asked why now and not before, his was blunt. BN was so strong before it didn’t matter at all when it happened.

Had he forgotten that BN had successfully used this approach (party-hopping) to take over past duly-elected state governments, notably Sabah in 1994 and Perak in 2009?

Throughout the chat, he made clear his strong stance against corruption. He had stood firm about not joining the present government because he will not work with the corrupted. He also emphasised that Pejuang members must have no expectation of being selected to run for public office.

Yet, during the time he was the prime minister when he often publicly railed against Umno leaders for corrupt practices, few, if any, were taken to task and incarcerated during his watch.

Sadly, Mahathir was also opaquely selective with his “facts” to justify some of his hard views.

For example, he claimed racial parties are still needed because “there’s still a lot of (economic) disparity between the different races and that must be addressed first”. His often-expressed mantra was that only a Malay can win in a rural constituency and also only a non-Malay can win in an urban constituency.

Asked if meritocracy has a place in Malaysia, Mahathir retorted: “Are all races in Malaysia prepared to accept 100 percent Malaysian identity? No more vernacular schools and everyone adopt Malay as their mother tongue?”

Is Mahathir not aware that the reason why national schools are increasingly not the first choice for most non-Malay (and many Malay) parents is that they view national schools as no longer providing the quality education their children need? Does he also not know that other countries are now embracing multiculturalism? And that preservation of ancestral cultural and language identities by migrant families is not incompatible with the loyalty they profess to their adopted country?

One question which was not asked is, why would a needs-based policy not make better sense than a race-based one? The former helps all marginalised citizens regardless of race. The latter favours all persons from one population segment, regardless of economic standing. This policy raises an obvious inequity: why should tax dollars be used to help rich Malays but not poor non-Malays?

Furthermore, not adopting meritocracy as the foundation of good governance adds all kinds of costs for the nation. It also fuels corrupt practices. All consequential costs (from poorly conceived government policies, weak projects implementation to “leakages” from corrupt practices and an oversized public services payroll, etc) are invariably borne by everyone, including the Malay majority.

In his chat with Harith, Mahathir said he is not optimistic about Malaysia’s future, but offered no quick-fix solution out of the quagmire. He bemoans our country’s current sad state.

But I wonder if Mahathir has ever done some self-reflection after being the longest-serving prime minister to honestly answer (at least to himself) whether there was anything he did or did not do that caused our country to drift into the present sad state that he now bemoans.

Perhaps, it is time for multi-racial parties to come to the front.