The cabinet has been slashed from 32 ministers to 28 but the number of deputy ministers increased from 38 to 40. 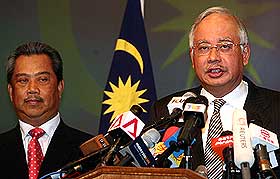 At the same time, the number of ministries have been reduced from 28 to 25, with the merger of a few portfolios.

There are only six new faces named as full ministers and even then, two were promotions from their deputy minister's posts. They represented only about 20 percent of the new cabinet.

Najib made his announcement at 3pm and he was flanked by his new deputy Muhyiddin Yassin. 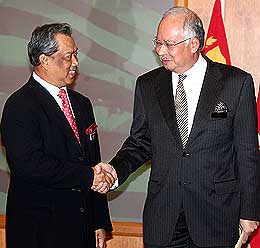 In a brief 15-minute statement before reading out his list, Najib said the cabinet reflected the government's aim to focus on people-first paradigm.

He said two ministries have been disbanded and their functions absorbed by others.

"A renamed Ministry of Energy, Green Technology and Water has been established, with a mandate to promote sustainable development and the adoption of green technologies," he added.

He said that a separate portfolio has also been created to oversee national unity under the PM's Department.

"This new portfolio will adopt creative approaches towards promoting national unity, in line with the concept of One Malaysia - People First, Performance Now," he said.

The new premier also added that he would personally evaluate the performance of each minister every six months.

"I will be personally involved in reviewing the progress of all ministers every six months to ensure their performance is on track, and where it is not, work with them and the civil service to ensure that we remove the barriers to their success."

Former trade minister Muhyiddin Yassin , who was elected Umno deputy leader at party polls last month, was promoted to the key post of deputy prime minister and also given the education portfolio.

The trade ministry is now helmed by Mustapa Mohamad , a trained economist who served as agriculture minister in the last administration. His deputy is Mukhriz Mahathir , the son of former prime minister Mahathir Mohamad.

The defence portfolio goes to Ahmad Zahid Hamidi , a close ally of Najib and one of the newly appointed vice-presidents of Umno.

Foreign Minister Rais Yatim was shifted to the newly created ministry of information, communications, arts and culture, and replaced by Anifah Aman , a backbencher from Sabah.

The sensitive home affairs portfolio, which handles internal security, is now held by Hishammuddin Hussein , the former education minister, who was also made one of Umno's three vice-presidents.

There was a snub for Khairy Jamaluddin , the son-in-law of Abdullah Ahmad Badawi who won the influential post of Umno youth chief. Traditionally, the youth chief sits in the cabinet but he was omitted from Najib's new line-up.

Khairy is the only head of the three Umno wings not appointed minister.

Others out of the line-up are Ong Ka Chuan (Housing and Local Government), senator Amirshah A Aziz (Minister in the PM's Department), Mohd Zin Mohamed (Works) and Zulhasnan Rafique (Federal Territories).

Shahrir Samad who had tendered his resignation as domestic trade and consumer affairs minister last week was not considered in this line-up. 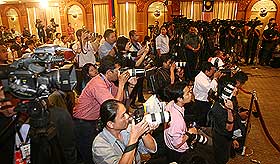 Sabah has increased its representation in the cabinet from three ministers in the previous cabinet to four while there is no change for Sarawak, which has two ministers.

Meanwhile, both Gerakan and MCA will also have a greater presence in the new line-up.

Ministers in the Prime Minister's Department

- Minister in charge of Law and Parliament (Umno)