The Malaysian Communication and Multimedia Commission (MCMC) has requested independent news portal Malaysiakini to remove two ‘provocative' videos, including the footage of the controversial cow-head protest, from its website.

"These videos contain offensive contents with the intent to annoy any person, especially Indians.

"This is an offence under Section 211/233 of the Communication and Multimedia Act 1998," said monitoring and enforcement division senior acting director Abdul Halim Ahmad in a letter dated Sept 3. [ letter here ] 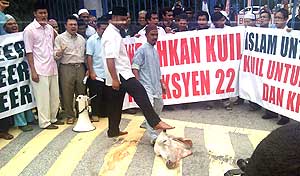 Under the communication and multimedia law, any individual found guilty of publishing content "which is indecent, obscene, false, menacing, or offensive in character with intent to annoy, abuse, threaten or harass any person" is liable to a fine of up to RM50,000 or a jail sentence.

MCMC, a government agency under the Information, Communications and Culture Ministry, is empowered to regulate matters relating to communications and multimedia activities, including private TV and radio stations as well as Internet websites.

According to the commission, it has received "numerous complaints" on several "provocative and offensive videos" that were posted on Malaysiakini and YouTube. 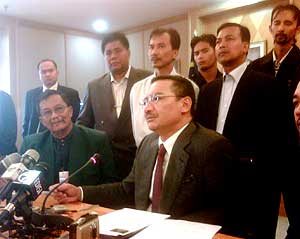 The second video is on Home Minister Hishammuddin Hussein's meeting two days ago with the residents who staged the protest and his subsequent press conference.

Last Friday, the residents of Section 23 in Shah Alam made international news when they paraded a severed cow's head on the city streets to protest the proposal to relocate a Hindu temple to their neighbourhood.

Some of the protesters were also seen spitting and stepping on the cow's head, while at the same time threatening to "shed blood". The cow is considered sacred by Hindus.

Editor: Our intention was not to offend

The protest drew flak from various quarters, including politicians from both Barisan Nasional and Pakatan Rakyat. Several police reports were also lodged against the protesters.

Prime Minister Najib Abdul Razak had also expressed regret over the incident, which is being investigated by the police under the Sedition Act.

Commenting on MCMC's request, Malaysiakini editor-in-chief Steven Gan said both the videos are news events which are of public interest.

"Our intent in putting up the videos was not to ‘annoy' anyone, but to do our job as journalists to draw attention to the protest and to ensure action is taken so that incidents like this will not happen again in Malaysia."

Gan said that there was no plan for Malaysiakini to take down the videos and the news website was seeking legal advice on the matter.

Late this afternoon, MCMC made an appointment with Gan for his statement to be recorded at the Malaysiakini office in Bangsar Utama tomorrow.