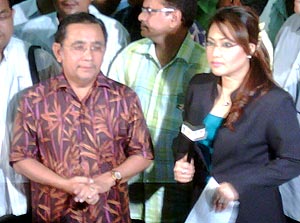 Deputy Prime Minister Muhyiddin Yassin, Negeri Sembilan Menteri Besar Mohamad Hasan and Mohd Isa raised their arms as they took the stage to the shouts of ‘Hidup Barisan!’ Zulkefly and PAS supporters were not at the hall.

In an immediate reaction, PAS vice-president Salahuddin Ayub ( photo, below ) said that his party accepts the decision of Bagan Pinang voters.

“This is a dark day for Malaysia because an icon of corruption has become a representative of the people.”

He added that Umno might have won the by-election, but it has lost the fight against corruption.

Meanwhile, Deputy Prime Minister Muhyiddin Yassin said BN has won all eight polling districts, including the three Indian estates, which showed a return in support from the minority community.

"We get an almost 100 percent increase in support and tjhis is a breakthorugh for BN.

"I hope this will transform into a new wave of support for BN and Umno," he said. 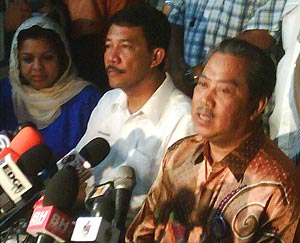 Muhyiddin added the BN government would continue with its policies which have benefited all communities.

7.31pm: Umno's Isa Samad claimed victory. He thanked party workers for their effort and voters for their support.

Asked if he had expected a landslide win, he said: "I didn't expect it to be that massive but I knew the majority would be bigger than 2008 (general election)."

He said his victory showed that Malays, Chinese and Indians have all returned to give their support to BN and Umno. 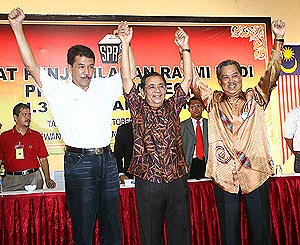 Asked to comment on the criticism by Umno veterans Dr Mahathir Mohamad and Tengku Razaleigh Hamzah over his candidacy, Isa said: "I just smiled."

Dejected PAS supporters have left the party's operations centre in Bagan Pinang. There were 150 people an hour earlier, now there are no more than 10.

6.53pm: Umno's Isa has scored a landslide victory in the Bagan Pinang by-election with a majority of over 5,000 votes.

6.42pm: Judging by the count so far, Umno's Isa is set to win the Bagan Pinang by-election with a landslide.

6.20pm: According to the early count in four of the eight polling districts in Bagan Pinang, BN is leading.

In the 2008 general election, PAS won Pekan Silliau, Ladang Atherton and Sua Betong (districts with substantial number of Indian voters where plantation estates are located). It is currently trailing in all these polling stations.