Without mincing his words, political analyst Abdul Aziz Bari likened those who hold the reins of power in Malaysia to a bunch of 'thugs'.

According to him, these individuals do as they please without proper regard for the law of the land and the percepts laid down in the federal constitution. 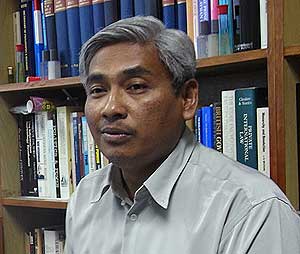 "We are like Zimbabwe, just with another name!" stressed the law expert.

Zimbabwe under President Robert Mugabe has earned international infamy over it's questionable policies and use of the legal system and laws to prop up the government.

Elaborating, Abdul Aziz said: "I don't know how else to call them, sometimes we need to call a spade, a spade. What we have is a state of lawlessness, it's like the law of the jungle."

He pointed to the recent overturning of the high court decision regarding the Malaysian Anti Corruption Agency's (MACC) right to interrogate beyond office hours as a glaring example.

"It is painful to hear the court of appeal decision. They are using the provision to overrule the high court, saying it is silent on the matter," he told Malaysiakini .

'Judiciary takes its cue from government'

According to the UIA law professor, the court of appeal's recent decision "is a lame decision and in itself a failure to carry out the court's role, namely to fill the gap left by parliament in the statute."

Abdul Aziz is adamant that "the high court decision is to be preferred as it is closer to justice and the spirit of the constitution."

"It is for the court to fill the gap by making a decision that is closer to fairness and justice," he added, though he bemoaned that in Malaysia, "the judiciary takes its cue from the government."

"When you have a judiciary like what we have, what can we do? In normal circumstances you go to court to compel the parties who refuse to do its legal duty to do it. But not in our case," he said.

What is worse, according to Abdul Aziz, Barisan Nasional is "undermining or simply could not care less about the constitution."

"BN has demonstrated complete disregard for the rule of law and supremacy of the constitution, either the letter or the spirit of it," he said.

Abdul Aziz contends that the Reid Commission's original intent was to propagate federalism, this he said permeates through the entirety of the constitution with the express delineation of powers to the state and the federal government.

On a micro scale, he added, this framework of federalism included the issue of the petroleum royalties and funding for states.

Abdul Aziz believes that the BN government is clearly going against the constitution when it set up the JPP (Federal Development Department) which is ultra vires of the defined rights of the states.

He explained that the state has rights to certain grants and funding the federal government sans such 'intermediaries'.

The use of the Emergency Ordinance to define territorial waters in the Kelantan oil royalty issue, he said, is another example of the BN government’s disregard for the law.

"Why not refer to the Petroleum Act or the Law of The Sea?" he asked.

In a similar vein, he also criticised the federal government's 'play acting' in making much ado when giving assistance and aid during natural disasters to opposition held states,

"Why the furore, it is their duty anyway, as described in the constitution," he said.

According to Abdul Aziz, this rot of lawlessness goes right down to BN’s core which is Umno.