A man who was arrested together with 50 others under the Internal Security Act (ISA) during a religious class in Sungai Cincin, Gombak on Jan 21, has demanded to see proof that the group is linked to terrorist activities. 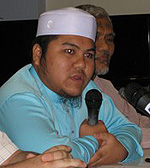 Mohd Yunus Zainal Abidin ( left ), 29, was freed at 3am the following day. 12 others from Syria, Nigeria, Jordan, Yemen and Malaysia are still in detention.

It was alleged that the detainees were linked to Umar Farouk Abdulmutallab, a Nigerian who had allegedly tried to detonate explosives onboard a Northwest Airlines plane flying towards Detroit.

Speaking at a press conference organised by the Abolish ISA Movement this morning, Yunus said that the 12 detainees are mostly graduate students who have been studying in Malaysia since 2003-2004.

They were all regulars at the weekly informal religious class held in a rented house by Aiman Al Dakkak, a Syrian doctorate student at Universiti Sains Malaysia.

Yunus, who was freed at 3am the next day, said that the police had mostly interrogated him on his connections to Aiman as well as the latter’s activities.

There was no mention of the alleged Nigerian bomber during the interrogation session, he claims.

Yunus also confirmed that the police had raided Aiman’s house but failed to find any incriminating evidence of his links to international terrorism. 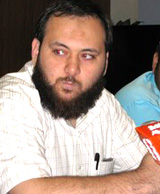 Homam Abdulalim Al Tarsha ( right ), a relative of one of the 12 detainees, affirmed his faith in Aiman’s innocence.

“He was guiding us on the Sahih al-Bukhari text, which is a collection of sayings from the Prophet Muhammad. If anything, Aiman was teaching us not to be terrorists. I’m really disappointed,” said Homam, who is studying engineering at Kolej Bandar Utama.

Both Yunus and Homam pleaded for the Home Ministry to allow the detainees a fair trial.

“I understand that national security is important, but show us some proof that Aiman is guilty of international terrorism first. Then we can evaluate the evidence,” said Yunus.