Seventeen years ago in 1993, Umno, the promoter and defender of the institution of Malay rulers, savaged the sultans when it decided to strip them of their immunity by way of amending the Federal Constitution. 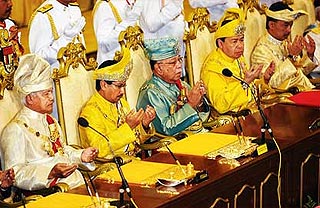 Umno leaders led by their then president and premier Dr Mahathir Mohamad justified the move on the grounds that "the amendments were necessary to protect the rulers and preserve the institution of the rulers as constitutional monarchs."

Tengku Razaleigh Hamzah of Semangat 46, while conceding the need for some mechanism for the rulers "to hear the grievances of the rakyat", opposed the amendments stating that they interfered with the "sovereignty of the rulers", and that this would eventually lead to the "formation of a republic".

Initially, DAP and PAS supported the amendments proposed, but for different reasons they abstained from voting for the proposals.

To PAS, the proposed removal of the rulers' immunity was acceptable because it was "not in accord with the principles of Islam."

But, it contended that the proposed amendments were "not comprehensive enough".

In addition, PAS vice-president Abdul Hadi Awang made it abundantly clear that it did not like the manner in which the "wrongdoings of the rulers were exposed" in the House.

However, he did not make any reference to the exposure of even more serious wrongdoings of the rulers outside the House. 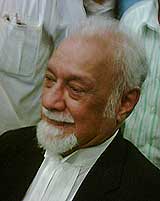 It is ironic that Karpal Singh ( right ), who now stands charged with insulting the Perak sultan, told the House then that while DAP fully agreed with the amendments proposed by the government, it would not vote for them because the Federal Constitution required the prior consent of the Rulers' Conference to amendments affecting their privileges and that the government had yet to obtain the consent of the rulers.

However, Mahathir and his Umno cohorts were in no mood to listen to appeals to observe constitutional niceties.

Generally, it is claimed that the conduct of the Malay rulers during the British rule and after the country gained its independence had not been exemplary, to the say least.

The Malay rulers had been accused of assaults, killings, usurpation of properties, making endless demands for timber concessions and various other misdemeanours.

Karpal had earlier raised in Parliament the matter involving the death of a caddy resulting from assault by the late Johor sultan. There was no action taken against the sultan.

By 1993, Mahathir admitted that the Umno had been made aware of the unacceptable conduct of the rulers.

"Although almost every prime minister and menteri besar has reported their problems to the Umno supreme council, the public was never informed. So the people do not know of the problems faced by the government," he said.

Mahathir also stated that "the government had been trying to get the rulers to agree on the issue since he became prime minister" and obviously was not successful. 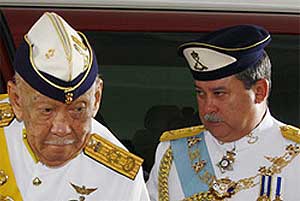 On Nov 30, 1992, the Johor sultan ( left in photo) "had done what he should never have done" and that incident, according to Mahathir, was "the last straw that broke the camel's back".

On this fateful day, the Johor sultan summoned Douglas Gomez, 52, a hockey coach at the Maktab Sultan Abu Bakar (English College) to his Palace Bukit Serene and there assaulted him.

According to Gomez, of all those present at the palace, only the sultan assaulted him. The media dubbed the incident as the ‘Gomez incident'.

On Sunday, Nov 29, Gomez, who had been the college's hockey coach since 1972, had in an interview with the New Sunday Times "criticised the JHA (Johor Hockey Association) leadership for ‘destroying' hockey in the state."

That statement to the press was the crime that Gomez was alleged to have committed and for which he was assaulted by the sultan.

A few days later, Gomez received medical attention for the injuries he had sustained and then made a police report.

There was an immediate reaction to the incident from Johor Baru Umno division chief Shahrir Abdul Samad.

He was reported to have said, "All sports loving people in Johor must be prepared to make a stand on the issue without any fear of repercussions."

Abdul Ghafar Baba, Umno deputy president and deputy prime minister, said that if it was true that Gomez had been assaulted then he must lodge a police report.

"We will investigate," he said. However, Ghafar confirmed that the cabinet was already informed of the summoning of Gomez to the palace.

It appeared that within the first week of the incident, the Government had already decided to act tough.

Finance Minister Anwar Ibrahim considered the events leading to the assault of Gomez as "serious" and said, "The government has decided to take a tough stand against the palace in a bid to prevent the spread of fear among Malaysians."

Anwar also urged "the rulers to look towards history and understand the people's problems and aspirations in dealing with the constitutional issue."

Look at the French and Iranian revolutions to draw the lesson, he said.

He pointed out to them that "Hikayat Abdullah Munsyi has criticised certain Malay rulers for their preoccupation with other activities, such as opium smoking, at the expense of administering their respective states."

Noting that this Gomez incident had made the people ashamed and angry, Malaysia's Foreign Minister Abdullah Ahmad Badawi, who later as prime minister ordered the police to probe Karpal for the comments that the opposition leader had made about the Perak sultan, warned the rulers of the consequences of antagonising the people.

"When the rakyat is ashamed and angry over such incidents in this day and age, the implications are grave," said Abdullah.

Mahathir made it known that "the government was studying the extent to which the rulers are immune to legal action."

He also made it clear that the "above the law" claim had many interpretations and it actually applied to certain matters only. "They do not include beating or killing people."

Mahathir also suggested to the rulers that they give serious consideration to the statement made by the Yang-di-Pertuan Agong Sultan Azlan Shah in 1981 that "rulers should maintain their credibility if they do not want to be removed to the museums."

Former law minister and attorney-general Hamzah Abu Samah emphasised that the "law should not provide exceptions to anybody, not even the rulers."

Attacks on the rulers

As the Parliament was in session then, there were members of parliament who also contributed to the mounting attacks on the rulers.

Shahidan Kassim (Umno-Arau) said that in this modern era ancient practices such as assaults and murders are major crimes and he called for the punishment of those responsible. "The assault on Gomez cannot be tolerated," he said.

Ibrahim Ali (Umno-Pasir Mas) pointed out that there was no law which allows the killing or assault of people by anybody.

The media played an important role in whipping up support for the move against the rulers. The editorial of Berita Harian quoted in the NST on Dec 9 proved the point.

It warned that "if hatred against the rulers is not contained, the people will revolt and the monarchy will be destroyed."

For its role in this Umno campaign to rein in the rulers, the media received thumbs up from the prime minister.

"The press played an important role in giving a clearer picture to the people over the recent issue involving the royalty," said Mahathir.

He felt that "the press has not pressured for the abolition of constitutional monarchy. It has contributed towards giving clarification to the people to avoid any confusion that may arise among the people." 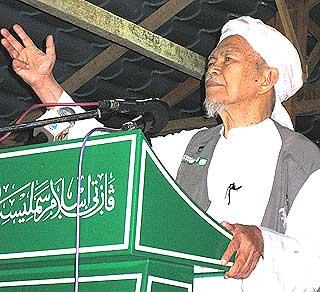 However, Kelantan MB Nik Abdul Aziz Nik Mat ( right ) had a different view. He described the press coverage of the issue "as being similar to communist tactics in planning a revolution."

Nik Aziz pointed out that such actions by the press were contrary to the laws "as the country had laws preventing anyone from questioning or discussing the position of the Malay rulers."

"We practise parliamentary democracy but so far the reports have been one-sided and attacking the rulers," Nik Aziz contended.

As pointed out by the Kelantan MB, the Sedition Act was completely ignored by the press in "giving clarification to the people" when they published reports on the wheeling and dealing of the rulers.

For about three months from December 1992 to February 1993, the media continued with their scathing reports with captions such as:

A clerk being fined RM100 for obstructing the Johor sultan's car; a motorist being fined RM500 for blocking royal motorcade; alleged abuses by the Johor sultan and members of the royal family; the conviction of the Johor sultan when he was Raja Muda on a charge of "culpable homicide not amounting to murder" for which he was fined RM6,000 and sentenced to jail for six months. He was later pardoned by his own father.

There were also five allegations of assault committed after he became sultan. Between 1988 and July 1997, the rulers were given 37,223.6 hectares of timber worth RM270 million.

The following were some of the headlines: 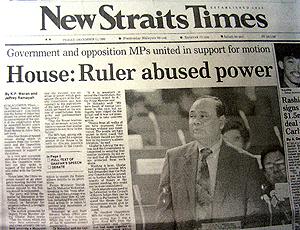 Customs seize three luxury cars - one of the cars was seized from a timber tycoon on suspicion of evading import duty using an ‘Approved Permit' issued to the Pahang sultan.

PM: No more extra benefits, Rulers to get only privileges; Kedah withdraws all perks given to royal household; Government sets limits on royal privileges.

Kedah sultan gets 160 ha concession a year: State government paid RM250,000 for expenses incurred by the sultan on an overseas trip; No more jobs for ‘royal contractor'; Illegal to use royal gun permits (with the allegation that the number gun permits sought per year by the Negri Sembilan ruler matched that of three battalions);Royalty owes RM264,000 in assessment arrears (Perlis royalty said to owe assessment arrears for houses, shoplots, stalls and a cinema).

Najib: Rulers have abused armed forces personnel; RM62.32 million spent on renovation of the King's palace in 1989; 6.8 million spent on cutlery, RM2.5 million spent on bedspreads and RM300,000 spent on storing the bedspreads: RM16 million needed to maintain nine palaces; Land wrested from the landless, Muhyiddin pledges full probe (he was referring to 1,600 hectares land withdrawn by the state government and given to a company controlled by the Johor royal family.

Extremely wealthy but still wanting more business favours (referring to the Negri Sembilan Royal family which owns large number of businesses ranging from the construction of oil and gas rigs to the Malaysian franchise for 7-Eleven Stores); Istana becomes a casino for a birthday party.

All these and more were reported in the media and there were hints of more to come if the rulers thought of not giving consent to the amendments to the Federal Constitution.

Part 2: Insulting the sultans with impunity