LIVE REPORTS The appearance of Najib Abdul Razak and Anwar Ibrahim on the last day of campaigning for P P212 signals tomorrow's voting may be close.

11.36am: Anthony Loke in a Twitter message claims that all speedboats in Sibu have been booked in order to deliver money to longhouses this evening. "Going rate is RM600 per door!" says the Rasah MP.

1 1.45am : DAP advisor Lim Kit Siang maintains the party's odds at 49 to 51 in favour of BN, due to what he claimed was continued pressure from Prime Minister Najib Abdul Razak and the BN.

"With Najib coming back here tonight, it shows the intense pressure they are putting on the Chinese, Iban and Melanau voters.

"They even went so far to block our party workers from entering longhouses last night," he said at their daily press conference this morning. 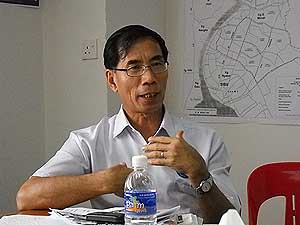 1.17pm: SUPP Sibu branch information chief Daniel Ngieng (left ) responds to Loke's claims on Twitter by urging DAP to lodge a police report on the matter if he was serious about his allegation.

"We also can say they (DAP) gives money. Everytime there are such allegations, if they have evidence, we ask them to make a police report."

5.45pm: Tony Pua reveals that DAP today face obstacles in entering longhouse areas. Their campaigners were threatened in Sg Sebedil, Rassau, and blocked from going into Penansu and Tanjong Bekakap.

According to Pua, Thomas Su, who led the team to Sg Sebedil, was threatened by BN supporters in full view of the police and Election Commission officers.

"They even warned Thomas Su not to set foot in the polling station there tomorrow, while the EC and police did nothing."

In Penansu, which is a BN stronghold, the DAP campaign team led by Tan Kok Wai was also blocked from entering the longhouse, although they have rented a room there as the party’s operation centre.

"We are forced to cancel our function in Penansu this evening," he lamented. DAP campaigners were also turned away in Tanjong Bekakap.

In addition, DAP was forced to hire boats from Sarikei for Anwar Ibrahim’s visit to the longhouses today because BN has booked all the locally available boats.

About 60 Pakatan MPs are attending the gathering, which DAP officials say is expected to draw 10,000 people. Sor far, about 2,000 have gathered to listen to warm-up speakers.

7.30pm: Chiew Chin Sing (DAP-Kidurong) stressed that tomorrow’s Sibu by-election will be the prelude to the next state elections and hope that the people can vote for change.

7.35pm: Najib and his motorcade leaves his first stop - the BN ceramah at the Chinese-majority Rejang Park - as soon as he got there.

No reason is given, but talk is that he will return when the crowd gets bigger. The crowd is estimated at around 500 people at present.

8.10pm: Najib comes back to Rejang Park, a DAP stronghold, in the middle of candidate BN candidate Robert Lau Jr's speech. Three cheers of "Satu Malaysia" are met with rather muted response. The crowd has grown to about 700 people.

attracting all sorts including a lady selling copies of 4D gambling

results for today. As Robert Lau continues with his speech, the lady calls out "totooo, totooo", getting some buyers as she moves around.

8.25pm : Najib takes to the stage, finally getting the crowd to respond when he said "salam yi ge malai sia" in Mandarin (salam 1Malaysia).

8.30am: At the DAP ceramah, the crowd has ballooned to 10,000. The parking lot opposite the Paramount Hotel is now filled with a sea of people. So too are two lanes of the main road. MP Chong Chieng Jen (DAP-Bandar Kuching) leads the crowd to shout "Pek Moh xia tai" (white hair step down) three times.

A man wearing a PPB T-shirt appears at the scene to pressure the cafe owner to cut off electricity supply to the stage. After Chong has completed his speech, the light at the stage has been turned off ( right ).

"He is our young fighting cock. He can work anywhere in the world, but he told me that Sibu has been good to his family.

"He said they owe a debt to Sibu, and that is why he is offering

himself as candidate for Sibu.

"I stand by Robert Lau Jr and no one else. When he stands, he speaks for Sibu and he has my ear as prime minister," he said. [VIDEO l 2.52 mins]

"Let's make a deal. If you deliver me Robert Lau Jr on Sunday, I will

sign the cheque on Monday," he said to a spirited response from the

8.55pm: Lights at the DAP ceramah opposite of Paramount Hotel are back on. It was switched off by the cafe owner who was urged by man who appeared to be a BN supporter about 20 minutes ago.

9.05pm: Najib arrives at the Sibu Gateway to attend a concert for Sibu residents.

Draped around the landmark square are banners saying "Terima Kasih PM, Kerana Menolong Rakyat Sibu" (Thank You PM, for Helping the People of Sibu) and "PM, You are the Best".

A crowd of about 3,000 are present, and they are listening to 'golden voice' Jamal Abdillah. 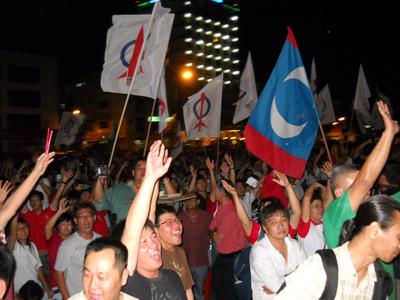 9.20am: At the DAP ceramah outside Paramount Hotel, party supremo Lim Kit Siang takes the stage. He says money is coming to town like water.

Kit Siang: Can you accept?

"We should tell him if you cannot solve the flood problem in next 24 to 48 months, then he should retired. In the 13th general elections, let us make Najib the opposition leader."

9.40pm: It begins drizzling in parts of Sibu. At the DAP ceramah, many unfurl their umbrellas and stay put.

9.45pm: PAS president Abdul Hadi Awang takes the podium. He calls for the people to reject the 'politics of development'.

9.53pm: Najib gets a much better response from 3,000 strong mostly Melanau/Malay crowd gathered for a concert and meet-the-people session at Sibu Gateway.

He attacks the Pakatan for "lying" to the people, citing the Sept 16, 2008 promise by Anwar Ibrahim that he would take over the federal government.

He added that Wangsa Maju MP Wee Choo Keong's recent departure from the opposition proved the Pakatan is fragmenting.

"Are you fools?" he asked, with the crowd shouting ‘no’.

PM’s wife Rosmah Mansor takes to the stage to sing a Teresa Teng song ('The moon represents my heart') at the concert and meet-the-people session at the Sibu Gateway.

"My husband is a politician so he's good at talking politics. I'm no politician, so I'll sing to help our candidate Robert Lau Jr," she tells the crowd.

10.20pm: Sibu-based logging and media giant Rimbunan Hijau celebrates its 35th anniversary at the RH Hotel tonight. There is a display of fireworks at three locations in the city centre. 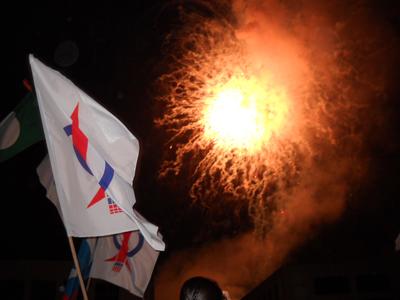 The fireworks show temporarily distracts the crowd. However, MP Nga Kor Ming (DAP-Taiping), a local favourite as he could speak the Foochow dialect, quips that Rimbunan Hijau is already celebrating a DAP victory.

He invites all DAP leaders to come on stage to sing the party’s election theme song ‘Change’ for the third time in Bahasa Malaysia as the fireworks explode in the Sibu night sky.

Najib leaves the Sibu Gateway after his wife Rosmah finishes singing two songs. He is headed for his third and last stop at Kampung Hilir before returning to Kuala Lumpur. 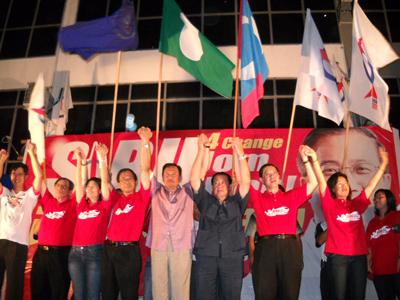 10.55am: The main draw to tonight's DAP final campaign rally, PKR leader Anwar takes the stage. “I just came from the Iban area, and I could see that they are warming up to Pakatan.

“It’s true that the Iban traditionally support BN, but after they see that their land is taken away, they now want BN out.

“They said land is their life. The government and its crony companies, by taking away their land, are taking their ‘life’.”

11.15pm: Anwar appeals to Sibuans to give DAP candidate Wong Ho Leng a chance to represent them in Parliament.

“This is because some of my friends has jumped, they have become ‘katak’. Vote for a new voice who can speak for Sibu and Sarawak, other than (DAP Kuching MP) Chong Chieng Jen.

"I believe Wong Ho Leng will make a difference in Parliament."

"Let's have a debate, between CM and CM, on who has make better use of state funds."

Organisers have put tonight's crowd at 20,000 - the biggest ever political gathering ever seen in Sibu. According to DAP supremo Lim Kit Siang, the party received a total of RM25,000 in donations from well-wishers.

12 midnight: The eight-day campaign for the Sibu by-election ends. Cooling off period begins. Polling is from 8am to 5pm tomorrow. Result is expected to be known by 9pm.