According to DAP supremo Lim Kit Siang, the Hulu Selangor by-election had registered 67.18% turnout at 3pm.

The voter turnout for Sibu in the 2008 general elections was 68%. This by-election may see a lower turnout than 2008. 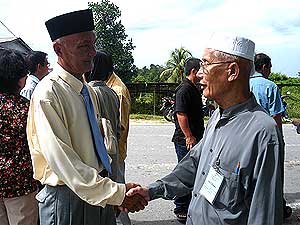 The independent candidate Narawi's ( left in pix ) tally so far stands at 11.

These are polling stations which BN is expected to do well.

However, DAP supremo Lim Kit Siang says the turnout in urban areas, which are considered DAP strongholds, the turnout is about 50 percent. "Not enough for a Sibu miracle," he laments.

With almost half of the polling stations closed, DAP supremo Lim Kit Siang is getting increasingly pessimistic.

“Results from eight stations - DAP is down by 540 votes,” he says in a tweet message. “Still reversible - but depends on Sibu Miracle.”

"Can (the) two hour 15 minutes left cover up the losses?" asked a worried Kit Siang in another tweet message. 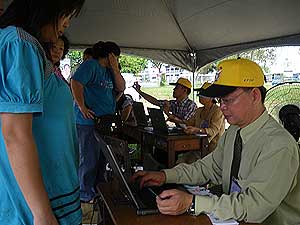 He has expressed concern over the low voter turnout thus far.

In another tweet, DAP's Serdang MP Teo Nie Ching is pleading for supporters to "pls ask ur family and friends to come out and vote!" 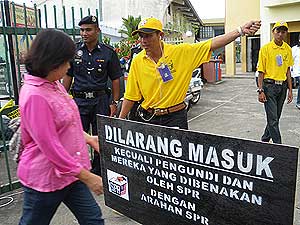 12.32pm: According to the Sibu4change Twitter, turnout at some polling stations have recorded high voting numbers as of 12 noon:

12.30pm: DAP MP for Bakri in Johor, Er Teck Hwa , says he and a team of campaigners have been blocked from entering one of the polling stations in Sekolah Kebangsaan Sg Aup by a group of Umno supporters and members led by Umno vice-president and Rural and Regional Development Minister Shafie Apdal . 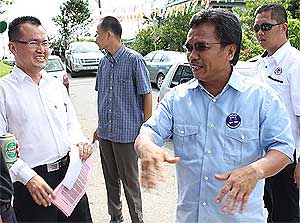 It led to a minor scuffle at the school when Shafie Apdal chased the team of DAP party workers out of the polling station, says Er.

The eight-member team was jointly-led by Er and Melaka Bandar Hilir state assemblyperson Teh Kok Qiew .

Though they had been monitoring the situation at the polling station since 8am, they were asked to leave by Shafie when he arrived in four wheel drive at about 10.30am with BN workers.

According to Er, Shafie's rough manner caused tensions to arrive between the two sides.

A group of Iban residents then surrouded the BN team. A PKR member present angrily scolded Shafie about his four-wheel drive, which was said to be blocking the village's main access road. 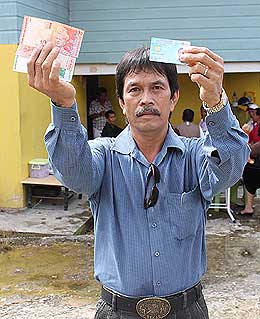 Shafie, says Er, was forced to cancel his visit plans and left the polling station under heavy security.

Er also said that DAP has received many complaints of BN vote-buying near the Sekolah Kebangsaan Sg Aup the polling station.

"One of the local resident even showed us a RM70 ( right ) received from BN half-an-hour ago, and gave us his IC number as proof," Er told Malaysiakini in a short Email.

The Bakri MP said he admires the honesty of Iban voters, and hopes to set up a new division in the Iban areas after the election. 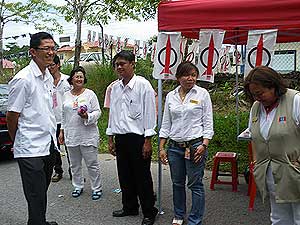 12.10pm : SUPP candidate Robert Lau ( far left ) goes on the defensive while making his rounds at the SRJK(C) Kiang Hin polling station, saying that he does not see Malaysiakini "writing good articles on me".

Asked how he rates his chances, he only said that BN is confident.

He accuses Malaysiakini of veering towards the "extreme left."

"Especially for this election, very extreme," says the lawyer.

12pm: The atmosphere at Sekolah Kebangsaan Bandaran Sibu, Jalan Bandong (a Melanau-Malay area) is hotter than the Chinese-majority area in town center.

Both BN (around 50 supporters) and PAS and PKR (around 30) are working hard campaigning on the road approaching the school. 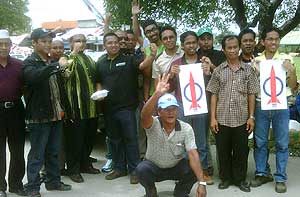 While the opposition supporters are relatively quiet, they also are waving the DAP logo to woo voters. 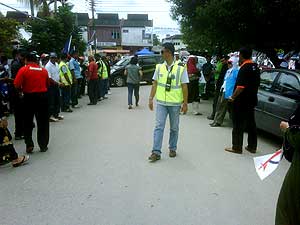 PAS youth chief Nasruddin Tantawi is present, and was "woo!" by the BN supporters.

The police are standing inbetween to control the situation.

At one point, PBB supporters moved towards PAS supporters as a show of force, but were told by the police to move back to their original place. 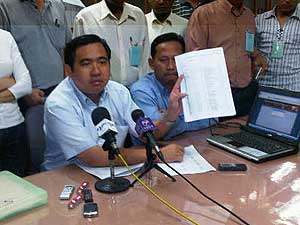 There were also non-voters on the list of postal voters, he adds. A 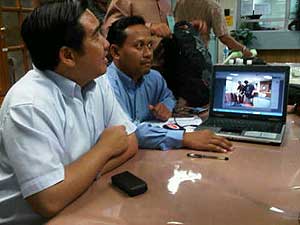 mong the 'suspicious' looking postal voters was one that Loke describes as a 'VCD-seller'.

10.50am: Sarawak EC chief Takun Sunggah and Returning Officer Wong See Meng warn PKR and orders the removal of the booth that they set up around 50m away from SJKC Methodist. 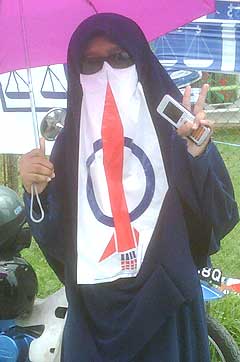 Takun then leaves the scene, telling reporters that he will “ask police to take action.”

Upon his return, however, Takun produces a copy of the Election Act’s Section 26 (c) that proscribes the set-up of any party booths on polling day.

Initially protesting, Jamil says the booth is meant only for supporters and is aimed to check the electoral roll or to campaign.

"Why? If it rains, where should our supporters stand?" he asks. 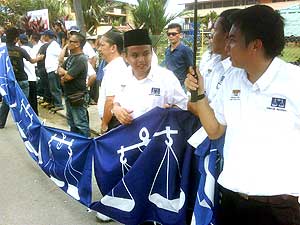 Takun has thus gone across the road and warned the young turks about the flags.

Soon after the EC officer leaves, however, the young turk are back to waving their BN flags again.

10.45am: All is quiet outside SJKC Methodist. There is one EC counter, set up to check voters' names, and a DAP ' pondok panas ' booth 50 meters away. 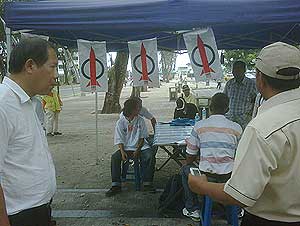 About a dozen SUPP supporters sitting outside the polling station. There is no campaigning, no flags, no cheering.

10.30am: According to PKR's deputy youth chief Fariz Musa, there were tensions at Sekolah Kebangsaan Kampung Bandung around 9.45am, but has since died down.

10.10am: Narawi Haron casts his vote at the SK Hulu Sungai Merah polling station. The independent candidate is upbeat about his chances, claiming that he had received a good response during his house-to-house visits despite not having any election machinery to back his campaign.

"I'm proud of my supporters, who had the courage to cheer "Hidup Narawi!" in the presence of (BN) ministers. 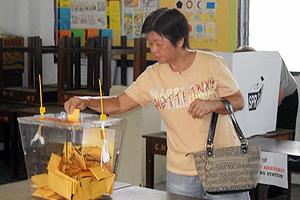 9.20am: Wong Ho Leng claims poor training of SPR staff at several polling centres resulted in polling agents from both DAP and SUPP being barred from entering polling streams earlier this morning.

“How can this be, when the EC is said to have spent so much money on training, but the staff are still not well trained,” said Wong after he and his wife cast their votes.

He noted, however, that the situation had been rectified in most areas. He is now on the way to the Nangka state constituency. 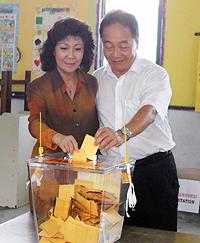 9.15am: Unlike in West Malaysia, there are no supporters gathering outside polling stations doing last minute canvassing with party flags and cheer.

There are only a dozen party supporters from both sides outside SJKC Chung Hwa. The main task for party workers seems to be helping voters and monitoring the voting process.

8.52am: Voters come in small batches to SJK(C) Guong Ann, where DAP candidate Wong Ho Leng will cast his vote at 9am. 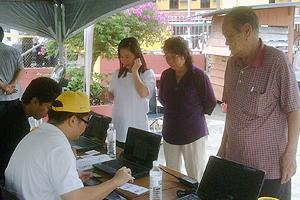 8.50am: SUPP Sibu chief Wong Soon Koh ( above ) voted at SJKC Chung Hwa. Speaking to reporters after casting his ballot, Wong urged voters to come out earlier due to possible rain in the afternoon.

He also told reporters that at some villages are suffering from some minor flood problems due to high tide.

8.50am: Turnout rate for elder voters is good at SJKC Chung Hua, with more than 10 people queuing to vote and a steady stream of arrives. The stream for younger voters, however, contains few voters and onen eed not queue to vote. 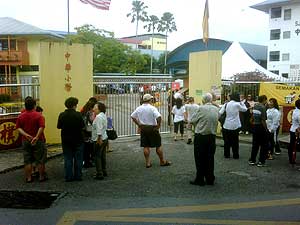 8.45am: The sky is starting to darken as black clouds gather overhead.

8.10am: The fair weather in the morning augured well for a smooth polling process as voters began queuing up, even before the centres were opened, to choose either BN's Robert Lau Hui Yew , DAP's Bukit Assek state assemblyman Wong Ho Leng , or independent Narawi Haron .

Voters are advised to vote early today as the Meteorological Department forecasts isolated thunderstorms in the afternoon.

The Election Commission (EC) is expecting about 80 percent turnout for the by-election.

8am: Voters in the Sibu parliamentary by-election started to cast their votes as soon as polling centres opened at 8am today.

A total of 52,158 voters are due to cast their votes to elect their new member of parliament at 45 polling stations with 110 streams at 39 schools, two kindergartens, a training centre, a longhouse, a public library and a public recreational centre.

Another 2,537 postal voters comprising 1,910 military and 627 police personnel had cast their ballots on Thursday and Friday.

About 2,000 police personnel have been deployed in this mostly urban constitutency to ensure a smooth poll.

Ten polling centres will close at 1pm, five at 2pm, six at 3pm, two at 4pm and 22 at 5pm. The ballot boxes will be taken to the tallying centre at the Sibu Civic Centre.

The result of the three-cornered fight is expected to be announced by the EC at the latest by 9pm.

7.50am: DAP supremo Lim Kit Siang, in a tweet message, says DAP has increased its chances of winning the Sibu by-election as voters go the ballot box today.