Yong Vui Kong, a Malaysian national currently on death row in Singapore, may finally be getting a shot at keeping his appeal alive , as Minister in the Prime Minister’s Department Nazri Aziz and our Ministry of Foreign Affairs have reportedly agreed to a meeting with his lawyer. 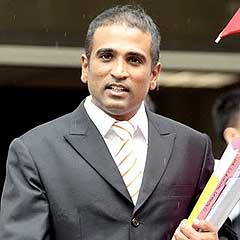 M Ravi ( left ), a human rights lawyer representing Yong on a pro-bono basis, said the government has requested to meet him when he visits Kuala Lumpur next week, between June 25 and 29.

“They have requested that I write a formal letter to them, which I have just forwarded to the media. I will keep you informed of the developments,” said Ravi, in an SMS to Malaysiakini yesterday evening.

Ravi met with Rohani and Juraida Abd Jamil, the other second secretary from the Consular’s officer, for about an hour in Hotel Hilton this morning to discuss Yong’s case.

Rohani visited Yong, who was caught trafficking 47g of heroin into the island city in 2007, in Changi prison yesterday following media reports seeking Malaysia’s intervention in the case

At the same time, Ravi said he is exploring with Malaysian lawyers to file an application in court for mandatory injunction to compel the Malaysian government to file a complaint in the International Court of Justice (ICJ).

“This would be done if (Malaysia) fails in its duty to exercise its right to this vital legal remedy, which is available to our client via the ICJ,” he said. 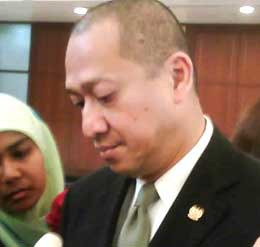 “We note with regret the de facto law minister of Malaysia’s (Nazri) response, that the case was an internal matter. His remark was of grave concern to us, our client as well as the legal community and civil society in Malaysia,” he added.

“It is the duty of the Malaysian government to protect the rights of its nationals,” he stressed.

Ravi, in his letter to the High Commissioner, explained that Yong was making a clemency petition to the Singapore cabinet and President SR Nathan.

His recourse for remedy was unfortunately pre-empted when Singapore Law Minister K Shanmugam made a remark about the latter’s case even before he could file the clemency, said Ravi.

Ravi added that Shanmugam’s remark has prejudiced Yong’s relief to the clemency process.

“In our view, as well as based on the opinion of legal experts in London, this is a serious breach of due process. We would urge the Malaysian government to file a complaint at the ICJ on behalf of its national facing imminent death arising out of the breach of local and international laws by Singapore,” he said.

“In view of the denial of the clemency process, the only option available to the Singapore government is to commute Yong’s death sentence, which is the same remedy that can be sought by the Malaysian government at the ICJ”.

On May 9, Shanmugam said publicly that “Yong Vui Kong is young, but if we say, we let you go, what is the signal we are sending?”

The island’s legal experts said that these comment had potentially prejudiced an appeal before it had been decided in court, making Nathan’s rejection of Yong’s clemency appeal both “illegal and flawed”.