The three-member team - led by ASP Marina Hashim from the Shah Alam district police station - arrived at 3.45pm and searched the storeroom where books published by Malaysiakini's subsidiary Kinibooks are usually kept.

Unable to find copies of Cartoon-o-phobia , the police proceeded to take a statement from Malaysiakini editor-in-chief Steven Gan.

In the half-hour session with Marina, Gan was questioned on Kinibooks’ operations, Malaysiakini’s relationship with Zunar, and about the book launch last night . 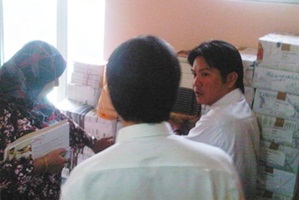 “It is quite obvious that this is an attempt by the police to seize every available copy of the book,” said Gan.

He said the printer had yesterday informed the police that 3,500 copies of the book were published.

The police raided both the printer in Puchong as well as the book distributor in Petaling Jaya yesterday but were unable to find the book.

So far, the police have seized 66 copies of Cartoon-o-phobia from Zunar’s office in Brickfields.

Gan said that the police need not consficate all available copies of Cartoon-o-phobia .

"We are more than happy to provide them a free copy should they need it for their investigation."

When asked if he expects the police to return, Gan replied: “I’m quite sure they will.”

Zunar, whose real name is Zulkiflee Anwar Ulhaque, was not with the officers. It had earlier been thought that Zunar would be accompanying the police on their visit to Malaysiakini .

According to a lawyer representing him, Fadiah Nadwa Fikri, Zunar’s statement was taken this afternoon, and he was released on bail at about 6pm.

Yesterday, the police arrested Zunar at his Brickfields office and he was later taken to the Sepang district police headquarters.

- which caricatures Prime Minister Najib Abdul Razak and his wife Rosmah Mansor - is a collection of cartoons published from November 2009 to September 2010 on Malaysiakini.