The office or store of the mysterious 1Malaysia NGO which pops up during by-elections with its trademark orange coloured goodie bags has been spotted in Kuala Lumpur.

Following a tip-off, Malaysiakini recently stumbled upon an office suite in Plaza Mont Kiara which appears to be a headquarters or a storeroom of sorts. 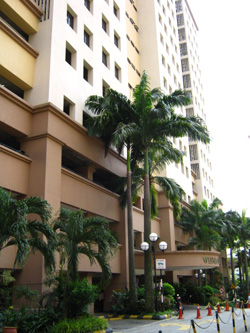 While the office suite has been occupied since mid-last year, it is understood that it is where provisions such as a condensed milk, tea, Milo powder and stationery sets are packed in the orange bags before distribution.

Checks also showed that the nondescript office suite is registered under a company named Solar Shine Sdn Bhd minus other signages.

The only thing on the door was a renovation approval permit carrying the company's name.

Meanwhile, checks with the Companies Commission of Malaysia returned nothing that was extraordinary, with unknown names such as Muhammad Zaki Ilias, Ramlan Ag Karim and Chin Yuet Sin listed as directors.

However, the summary of share capital showed that Solar Shine is just a RM2 company, a shell company with only RM2 in capital (the bare minimum for shares issued to directors).

It is also learnt that there will usually be activity every now and then, turning intense several weeks before a by-election campaign.

It is also learnt that they have started packing and transporting

their goodie bags as early as last week.

The 1Malaysia NGO first surfaced in the campaign for the Galas by-election late last year when scores of volunteers were walking around in the predominantly Chinese majority areas handing out the goodie bags.

Wearing uniform white t-shirts with a large 1Malaysia logo on the back, the volunteers - mainly local recruits - flooded the streets in what looked like a massive branding exercise. 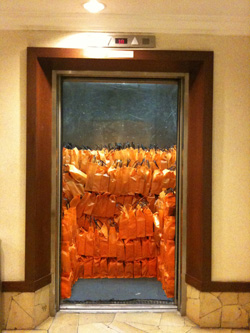 The modus operandi was similar in the recent Tenang by-election in January when hundreds of locals were also recruited to walk around the non-Malay majority areas to dish out the goodie bags.

While several opposition politicians have described that effort as a form of vote-buying , they admitted that the 1Malaysia NGO had been somewhat effective in the seepage of the opposition's traditional Chinese voter bank to the Barisan Nasional.

It is understood that the ‘NGO' was set up when a BN initiated survey revealed that Prime Minister Najib Abdul Razak's 1Malaysia slogan had struck a positive chord in Chinese and Indian voters, compared with component parties like MCA and MIC.

An MCA source also told Malaysiakini that the NGO had been had tasked with the mission to lure back Chinese and Indian votes through the aggressive marketing of the 1Malaysia slogan, especially after the voters surveyed claimed that they have lost faith in the other BN component parties.

But apart from that, even most BN leaders are in the dark over who is really is behind the 1Malaysia NGO, or where the funding is coming from.

In fact, as early as last week the familiar faces of the 1Malaysia NGO landed in Merlimau in preparation for the by-election there, including one Aloysius Lim , who was campaign coordinator for the Tenang by-election.

China Press had reported that the NGO had been making their rounds organising free lunches and dinners in the constituency's predominantly Chinese areas, attracting about 100 people each time.

Though there were hardly any political speech at the functions, the NGO has been seen to be making inroads with the locals, its volunteers often talking to them in small groups or on a one-to-one basis.

The nomination date for the Merlimau by-election is Feb 26 with voting set for March 6.