For 400 families in Kampung Tuie, a Malay traditional village in the interior of Sarawak, the lure of the state polls is pinned on a simple hope - the supply of clean water. 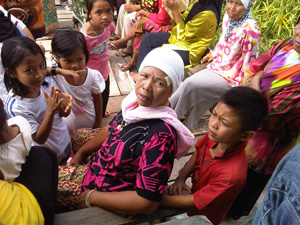 me 120 years ago, the village of about 3,100 people still has no access to treated water - 48 years after the formation of Malaysia. Their situation has been worsened by the absence of rain over the past two weeks.

"The kids have to bathe in that pit," said Ayang Aceham (centre in photo) , 53, pointing to a dip in the side of the road.

Ayang, who has eight grandchildren, explained that water is trapped in the pit - about 1.5m wide - when the river rises and floods the village.

In dry weather, this is all that is available to the children. Several of them nodded when asked if they have bathed in the pit. 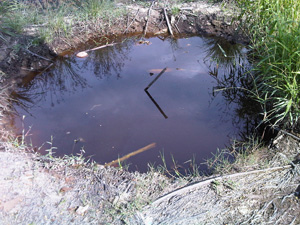 ng was among residents who could not hold back their complaints ahead of a ceramah at the village by PKR de facto leader Anwar Ibrahim last Sunday.

They are forced to drive for an hour to a well located in an estate to bring back water for daily use.

"Sometimes we bathe and do our washing in the Sungai Saribas, if there is no water," said Ayang, referring to the river that flows by the village.

Said another villager: “But there are many crocodiles in the river. Last month, a villager was attacked by a crocodile. It bit him on the back.”

The river bears the same name as the state constituency - Saribas , a Malay-majority rural seat that has never fallen to the opposition.

Researchers have previously pointed out that the absence of a water supply system in the interior of Sabah and Sarawak is the main factor behind crocodile attacks on villagers. 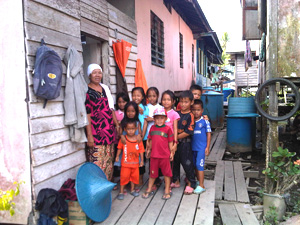 Ayang, who offered the journalist a drink, poured some rose syrup from a jar into a cup, filtering it with a net.

"This is the house I inherited from my father. There are 26 of us staying here including relatives and my father, who is now ill," she said of the house built 40 years ago.

Ayang's husband, a farmer, earns RM100-200 a month. Her children are working in Johor Bahru, a popular city for young Sarawakians seeking jobs, and help with the family’s finances.

Outside every house, there are several water tanks to trap rain water. The eaves of the houses are designed to direct the rain water into the tanks. 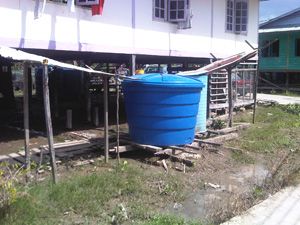 However this method has created another difficulty for the residents.

"The authorities always carry out spot checks for mosquito larvae in the tanks. If they find any, we are fined RM100 - and we have to travel to the town to clear the summons," Ayang grumbled.

Asked what the state government has done about the water problem, Ayang appeared frustrated with the promises held out by politicians over the years.

"They give us promises every year but these are never fulfilled. This year they promised to supply water and build the roads again. 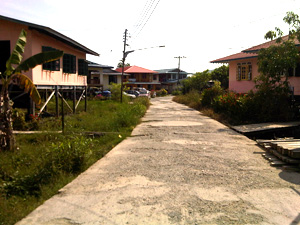 ere are still about 100 houses without electricity supply. They were promised supply five years ago.”

The only assistance from the government, according to Ayang, has been the provision of free water tanks but this came with a condition attached - that the villagers should vote for BN.

"They said 'if you vote for BN, you will get a water tank'. If any house displays a moon flag outside, then there will be no water tank for the occupants," she said, mistakenly referring the PKR logo as a ‘moon’.

This explained the absence of PKR flags in the village. The party’s candidate had won this polling district in the last state election, but failed to take the state seat. 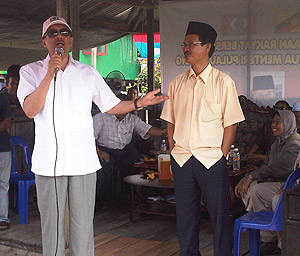 e-turned-politician Abang Zulkifli Abang Engkeh (right in photo) was defeated by PBB's Wahbi Junaidi, by a wafer-thin majority of 94 votes.

Zulkifli will make his second attempt to wrest the seat in the April 16 election, while PBB has replaced the unpopular Wahbi with former teacher Mohammad Razi Sitam.

Zulkifli and Anwar's recent visit to the village attracted about 200 animated villagers, who followed the ceramah under the scorching sun.

There are at least eight Malay villages in the Saribas constituency, all of them deprived of treated water supply and three of them without road access.

The only road to Kampung Tuie and nearby villages consists of a 3km untarred road full of potholes and mud that are a hazard to vehicles. 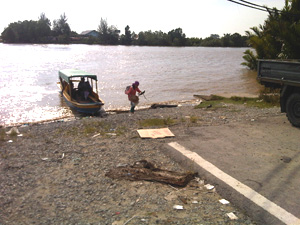 A newly-tarred road connects Kampung Tuie with the outside world, but there is a catch - visitors have to leave their vehicles at the jetty at the end of the road and take a boat to Pusa town across the river.

Natural Resources and Environment Minister Douglas Uggah Embas had announced that all these villages would enjoy treated water supply under 10th Malaysia Plan (2010-2015).

Deputy Prime Minister Muhyiddin Yassin had visited the constituency in February and announced that RM500 million had been allocated to Betong - the parliamentary constituency that iencompasses Saribas - for construction and upgrading of infrastructure.

However, Muhyiddin conceded that providing treated water remained a daunting task in the interiors of Sarawak and Sabah.

Subscribe Today
Read more from this author :
Kuek Ser Kuang Keng
Read more like this :
#sarawak
Most Read
Most Commented
Most Recent